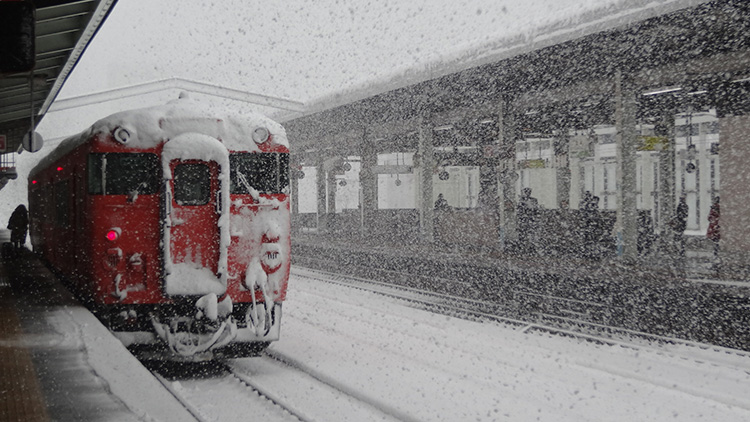 Before I reveal the answer, I want to ask you all if you’ve heard onomatopoeia words in English. Yes, in English there are lots, from tick tock to meow meow. While in English, onomatopoeic words usually refer to actual sounds, onomatopoeic words in Japanese are used to describe a wider range of sensations. They can represent movement, texture, consistencies and even feelings. They are sort of like sound effects to symbolise concepts. In Japanese you can have an entire conversation using only onomatopoeia! …well, maybe that’s over-stating it slightly, but it should give you an idea of just how often onomatopoeia are used as adverbs, adjectives and verbs in every day conversation in Japanese. I also bet a lot of you who are fans of Japanese manga have noticed how often onomatopoeia comes up in that medium.

Let’s have a look at the various onomatopoeia used in Japanese to describe snowfall:

Let me explain two points about onomatopoeia. Firstly, about how they are written in Japanese. Here, I’ve written them using hiragana. However, in manga and in novels, depending on the preferences of the author or the scene, or the visual effect they would like to achieve, both hiragana and katakana can be used. Secondly, it is said that about 30% of all Japanese onomatopoeia are made up of two repeating sounds, such as “shinshin” or “hara-hara”.

It’s pretty interesting how in Japanese you can indicate the size of snow and rate of snowfall using “sound”. But then… how can an onomatopoeia, a type of word for describing sounds, shin-shin mean snow that is falling quietly!? …I bet a lot of you can’t get your head around it! But for Japanese people, it’s possible to have conversations using onomatopoeia like this: “Earlier the snow was falling chira-chira, but now it’s falling kon-kon!” “Really!? Oh no… I guess tonight it will really pile up!”

Japanese onomatopoeia can express many things from sound effects to people’s feelings. I hope that you can have fun looking up other onomatopoeia and comparing them! “Animal noises” are completely different and really interesting!

▶︎ Check out a movie about onomatopoeia in manga

▶︎ ‘minato’ – learn japanese and interact with fellow students around the world online.