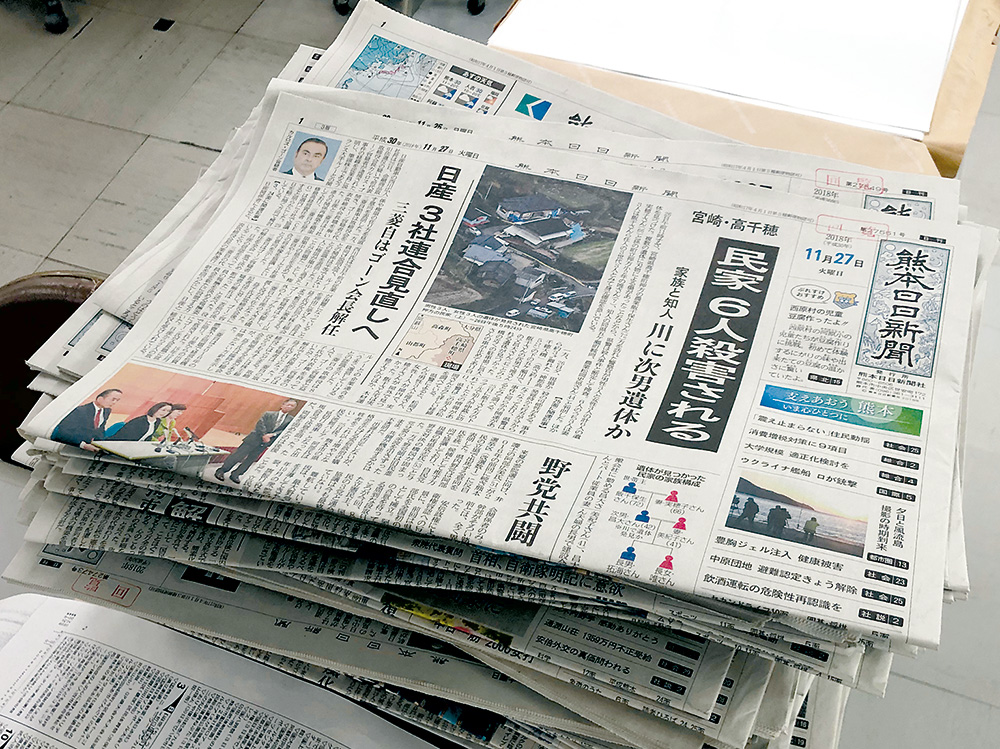 Almost half the households in the prefecture subscribe to Kumamoto Nichinichi Shimbun.

Well-established in the region, the Kumamoto Nichinichi Shimbun vigorously defends its local roots.

Situated around twenty minutes from Kumamoto station, the headquarters of the Kumamoto Nichinichi Shimbun, familiarly known as Kumanichi, are not in the least ostentatious, as if they were trying to merge into the background. Furthermore, when its managing director Araki Masahiro is asked to describe the newspaper, he explains that its aim is to be “as close as possible to the people” and “to cover local news in great depth”. This daily newspaper was created in 1942 by government decree with the merger of the Kyushu Nichinichi Shimbun and the Kyushu Shimbun. During its 77 years of existence it has never wavered in its commitment and over time has become a benchmark – even at national level – for its investment in local people. That is perhaps linked to the fact that Kumamoto Prefecture is often portrayed as “the home of the press”. A visit to the little museum housed in one of Kumamoto Nichinichi Shimbun’s buildings confirms that many great names from the world of journalism originally came from the region and that most of them have played a prominent role in the development of modern journalism in Japan.

Araki Masahiro, who joined the company in 1983, is proud of this heritage. During the whole of his career, he has always defended freedom of information and the ability to report inconvenient truths, which is sometimes unsettling for local politicians and business leaders. His experience as the Head of the Minamata branch, the small port city around 70km to the south of Kumamoto, strengthened his desire to maintain this tradition.Minamata’s tragic history is closely tied to the Kumamoto Nichinichi Shimbun and it’s symbolic of Japan’s post-war economic development, which took place with complete disregard for any respect for the environment and local inhabitants. Today, the whole world knows about “Minamata disease” (Minamatabyo), but when, on 1st August 1954, the newspaper reported the surprising rise in the number of mice in this fishing village following the “curious and massive” number of cat deaths, no one could have imagined that this would become one of the most far-reaching of scandals in the contemporary history of the country, a story Kumanichi was instrumental in breaking. Fewer than two years later, the “strange disease” (kibyo) that had struck down the cats spread to humans, but it wasn’t until September 1968 that the authorities acknowledged that it was connected to pollution (kogaibyo), in particular to the discharging of mercury into the sea by the Chisso chemical company.

The publication of a series of 23 articles in the newspaper in April 1968, entitled “It’s called Minamata disease” (Minamatabyo to yobu) marked a turning point in that it not only highlighted the fact that everyone should take responsibility for everyone else but it also gave the victims the right to live once again in a country where, if you are considered to be different, you would no longer be discriminated against. Like the victims of the atomic bombs in Hiroshima and Nagasaki, the inhabitants of Minamata had become outcasts after many of them suffered terrible side effects.

Araki Masahiro speaks today of the newspaper’s “mission” (shimei) in regard to a group of people who were on the brink of being cast aside. “It’s not easy to move on. Besides, the matter has not been completely sorted yet,” he explains. The present editor knows that this stance has helped enhance Kumamoto Nichinichi Shimbun’s prestige, and that its readers demand a continued high level of excellence from the newspaper. “There’s still so much to do,” he adds. But his words do not betray any sense of weariness. On the contrary, it underlines the

original role of this regional daily newspaper compared to national newspapers. “We offer another perspective on global questions. For example, when it was a question of signing the TPP (Trans-Pacific Partnership) free-trade agreement, we approached it from a local point of view and asked what the consequences would be for our prefecture. That’s what distinguishes us from the large national newspapers. We support a very local approach to the news,” he continues. “My work, just like all of the newspaper’s management, consists of always deciding what seems to us to be what’s most pertinent to our readers, so that they will always have access to information that’s useful to them in their daily lives. This means that it’s mainly local news that is prioritized.”

It is this insistence on defending the readers’ interests, and the care that is taken to give them added-value news, which has allowed the paper to maintain a relatively stable circulation of slightly more than 290,000 copies for its morning edition, and to be Kumamoto’s premier daily paper with 69% of the market compared with to the large national newspapers such as the Yomiuri Shimbun (11.6%) or the Asahi Shimbun (7.2%). Added to this is its evening edition of 45,591 copies, which, like most of the morning edition, is delivered to people’s homes. In other words, almost half of the households in the prefecture subscribe to the Kumanichi. Araki Masahiro welcomes the confidence that the region’s inhabitants have in his newspaper. “We’re reaping the rewards of our insistence on always providing better news,” he explains with a smile. The company has also invested in equipping itself with a modern printing facility situated in a building adjacent to the editorial offices. To maximise profits, when not needed for the two daily editions, it’s used to print other publications. Its owners are also committed to evolving and keeping abreast of technological advances. You can follow the different stages of the newspaper’s modernisation in its museum, which is often visited by schoolchildren from the region. In this way, they can familiarise themselves with print media, which appears to have less and less attraction for them. The newspaper has a website (https://kumanichi.com), which it plans to update over the next few months so that subscribers can read an online edition. On 17th December 2018, it launched a new web platform called Cross Kumamoto (https://crosskumamoto.jp), whose purpose is to showcase the region for its inhabitants as well as the many visitors who come to enjoy it. It has even more need of it as it painfully recovers from the violent earthquake that struck on 14th April 2016, registering 7.3 on the Richter scale and a magnitude of 7 out of 10 on the Japanese scale. It severely damaged the region and ruined many buildings including its pride and joy, Kumamoto castle, symbol of the prefecture as a whole. You can appreciate how strong the earthquake was even inside Kumanichi Museum where the heavy wooden crates, filled with the lead lettering used in the past for printing the newspaper, have collapsed and spilled their contents on the ground. “We decided to leave them as they are, so visitors can appreciate how severe the shock was,” says Ma tsushita Jun’ichiro, the museum’s manager. In his position as editorial manager, Araki Masahiro knows that this natural catastrophe also represents an editorial challenge for the newspaper. “In the face of such an event, we need to do our best to give our readers the information they need to get back on their feet and let them know how reconstruction is progressing, so that they don’t feel totally isolated,” he assures us. He recollects some of the reactions from the Minamata office at that time. He doesn’t want people to forget. “There are still around 30,000 people who are without a roof over their heads,” he recalls. He’s also thinking about the future of the newspaper, which he doesn’t see as “bleak” because by maintaining a close connection with local people he knows there will always be readers to support it.