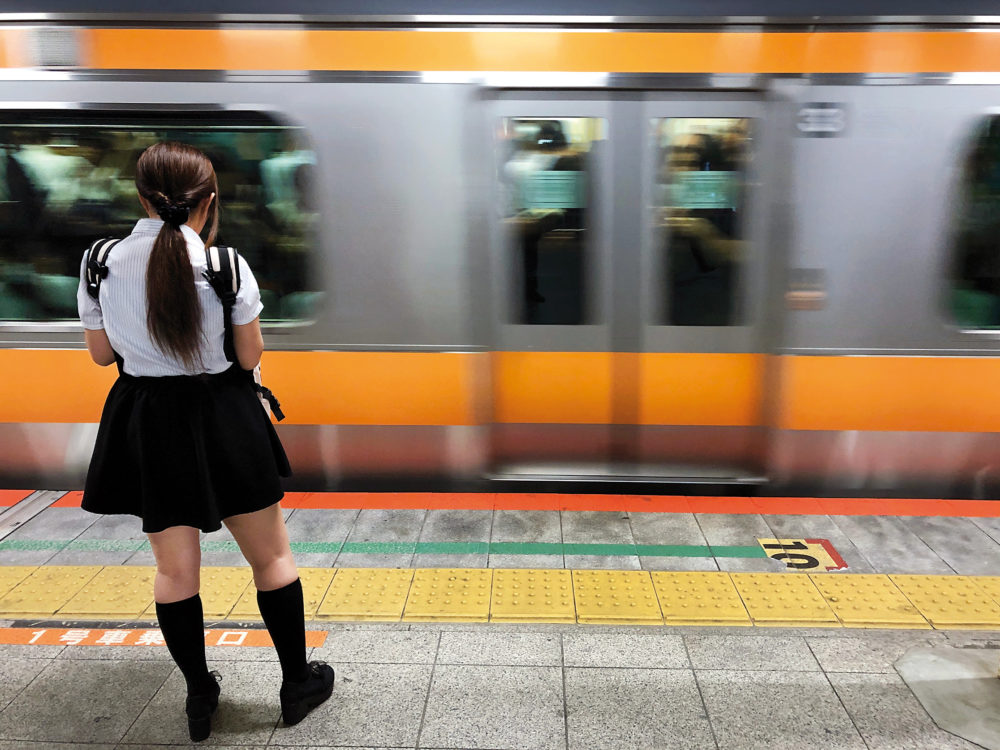 With its characteristic orange-striped coaches, the line cuts through the capital’s centre in a westerly direction through areas that are full of interest.

Crossing the centre of the capital in a westerly direction, this railway occupies a special place in the heart of Tokyo.

The Tokyo metropolis has more than 80 train and underground lines, but the JR Chuo Line plays a particularly important role in the life of the city. Even graphically, the Chuo Line (Chuo means “central” or “middle”) stands out amid the thick network of railways criss-crossing Tokyo because it cuts through it in a straight horizontal line, connecting Tokyo Station to the westernmost reaches of the prefecture and beyond.

The portion of the line that lies west of Shinjuku has also become famous for the creative communities that have gathered around its railway stations. Many writers, musicians, and manga and anime authors have called Musashino City and the Tokyo districts of Nakano and Suginami their home.

The Chuo Line’s original section opened in 1889 and connected Shinjuku to Tachikawa. It was Japan’s first entirely electric train. At the end of the Meiji period it consisted of a single coach and was in service between 04:45. and 23:06. It was built by Kobu Railway, a private company that was nationalised in 1906. In that year, the line was extended westward to Shiojiri, Nagano Prefecture, while the east-bound Shinjuku-Tokyo section was completed in 1908.

The line was built in an area that until the late 19th century was a vast low wetland (Asagaya Station’s name, for instance, comes from asai – shallow – and yachi – marsh), but during the 20th century its stations quickly became the centre of a new wave of urban development.

When it began, the Chuo Line was supposed to run alongside either major roads Ome-kaido or Koshu-kaido, which both ran through densely populated areas, and even today connect Tokyo to central Japan, but the route had to be changed when the locals protested against the original plan. The main problem was that the steam loco- motives used at the time were noisy and left a trail of dirty smoke. Nowadays, steam engines inspire nostalgic memories of the good old days, but at the time they were more likely to be seen as noisy iron monsters and a public nuisance. In the end, the planners chose to build the railway line in the rural, less densely-populated plain north of Ome-kaido where the land was cheaper.

Since ancient times, most of the locals had lived on high ground near shrines and temples. One such community developed around Myoho-ji, a Buddhist temple located just south of Ome- kaido. Today, this district resembles a backwater as the main economic activity has moved close to Koenji Station, about 30 minutes away on foot, but before the Chuo Line was built, the temple was the real heart of the district. During the Edo period, for instance, Myoho-ji attracted many pilgrims who travelled all the way from the city centre, and even appeared in a popular illustrated guide to famous locations. 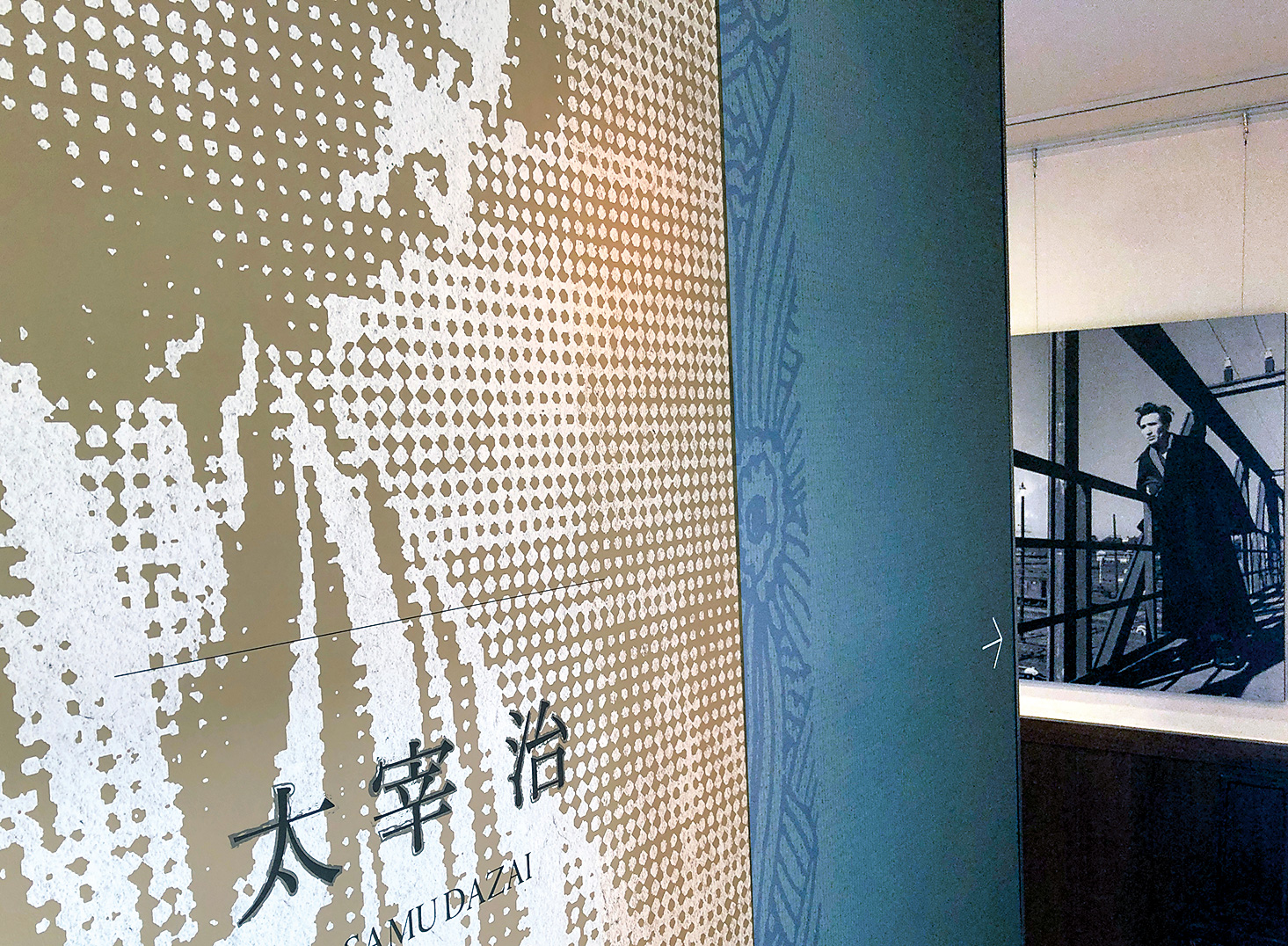 The celebrated writer Dazai Osamu, born 110 years ago, is an important figure connected to the line.

Then as now, trains leaving Shinjuku station travelled in a wide left curve before settling on a straight route running more or less parallel to Ome-kaido and the rivers that flowed into Tokyo Bay (Kanda-gawa and its tributaries, zenpuku- ji-gawa, Myoshoji-gawa and Momozono-gawa). In the 19th century, the railway intersected a number of ancient roads along which most people lived at the time. Nakano, Koenji and Asagaya stations, just to give a few examples, were all built where the railway met these roads. The area around Koenji aptly exemplifies the way its character changed when the Chuo Line was built. Today, Koenji is famous for youth fashion and its many second-hand and clothing shops, and the portion of the ancient road heading south from the station consists of two shopping streets, Pal Shotengai and Look Shoten- gai. However, they were only created after the station opened in 1922. In the 19th century, such concentrations of shops could be found only along Ome-kaido. Nowadays, Ome-kaido has become an important but anonymous artery with a multitude of convenience and chain stores, but during the Meiji period it was the real Koenji, and was undoubtedly the heart of the region west of Shinjuku.

The historical importance of the area south of the station is confirmed by the presence of two prominent religious sites, which were originally located along another ancient road: Koenji and Hikawa Shrines. Koenji was often visited by the third TOKUGAWA shogun, Iemitsu, who used to rest at the temple’s tea house after enjoying a day of falconry in the surrounding countryside. Hikawa Shrine, on the other hand, is nicknamed “weather shrine” because before the Pacific War the army had installed a weather station there. In the past, there was a wonderful view from the shrine of the Momozono River, which until the early 1960s meandered its way toward centra few minutes away from Koenji’s punk-rock scene is one of those quintessential Tokyo things. Speaking of contemporary culture, few youngsters may be aware of the area’s past, but they probably know that the nearby Koenji Central Park is featured in MuRAKAMI Haruki’s 1Q84. Apparently, before becoming a famous author, Mu- RAKAMI used to work at a jazz café in Koenji called As Soon As, and used to come to this park during his breaks.

Besides Koenji, most of the region’s ancient roads were built to connect several Buddhist and Shinto sites. Another typical example is the one that intersects Asagaya Station. Running, like all the other roads, in a north-south direction, it connects Enkoji, Asagaya Shinmeigu and Omiya Hachimangu. The latter is a particularly interesting place. Built in 1063, it is situated on a slightly elevated spot near the zenpukuji River, and in the shrine’s grounds there is a spring where people still go to get fresh water.

Around the time Asagaya Station opened, a section of the ancient road was turned into a shop- ping street, Pearl Center, which mostly sold household goods. Today, the partly covered large parts of Tokyo, and many people moved to the western suburbs turning them into a new residential area. Between 1920 and 1930, the population in what would become Suginami- ku grew sevenfold.

In the late 1960s and early ‘70s, Koenji and Asagaya attracted a different kind of person who lived at the margins of society. This bohemian community was portrayed by comic artist FuKuTANI Takashi in his cult manga Dokudami Tenement.

For some reason, Asagaya even appears in several popular horror films such as Ring, Ring 2 and Death Note. However, the area served by the Chuo Line is anything but a dark place. Next time you visit Tokyo, be sure to check it out.