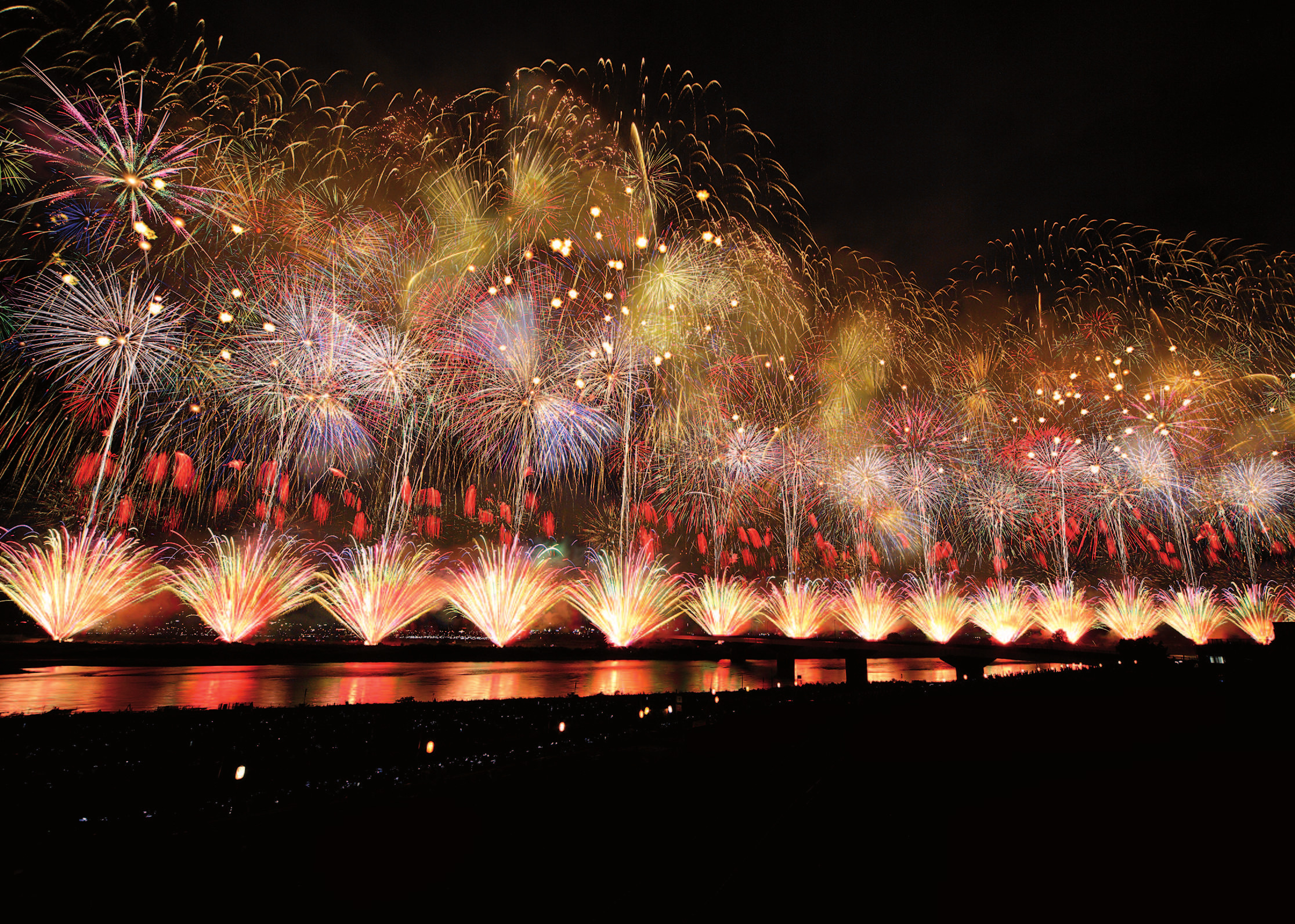 Whatever the season, Nagaoka’s firework displays are always very impressive.

The city’s firework display festival is one of the most popular in the Archipelago today.

Japan has a long and rich history of matsuri or traditional festivals. They are held everywhere, from Hokkaido to Okinawa, to celebrate local events, seasonal customs (e.g. honouring the spirits of the ancestors in summer) or to worship the local kami (deities). You may be familiar with people carrying heavy mikoshi (portable Shinto shrines) around the streets while wearing colourful happi coats and hachimaki (headbands). Unfortunately, many festivals run the risk of dying out due to depopulation and lack of funds. The countryside has been hit particularly hard in this respect, but even some big names have run into problems. Two years ago, for instance, attendance at Tokushima’s famous Awa Odori dance festival hit a record low. However, not everybody is shedding tears, and the city of Nagaoka is actually thriving. Located two stops from Niigata on the Joetsu Shinkansen Line, which connects the prefecture to Tokyo, Nagaoka is famous around Japan for its firework festival, which takes place on the first three days of August, and has recently generated revenues of up to 8 billion yen.

Firework festivals are one of the highlights of the summer holidays. In August alone, more than 200 such events take place somewhere in Japan, and Nagaoka is one of the most popular. Indeed, thinking globally rather than locally (their fireworks are even featured at the annual Honolulu Festival in Hawaii), the organisers aim to brand Nagaoka as THE firework city of Japan. In order to achieve this they have gradually widened the scope and scale of their activities, adding a one-day Winter Fantasy event and creating the Nagaoka Come Hyappio Fest in the autumn. The latter is a music and food festival (Come – usually spelled kome – means “rice”, Niigata’s most famous product), which is held in mid-October and features concerts, plenty of food stalls, and, of course, the usual pyrotechnics (https://nagaokamatsuri.com/en/).

According to HIGUCHIKatsuhiro, these festivals have contributed in enhancing the reputation of the whole prefecture. HIGUCHI who was born in Nagaoka and is the owner of a local food company, has been involved in running the festival and assisting in the city’s revival for many years. He is currently the Managing Director of the Nagaoka Fireworks Foundation.

“35 years ago, when I was in Tokyo, Niigata was a sort of non-entity,” HIGUCHI says. “When I said I was from Niigata, most people would say, ‘Ah, that’s [former Prime Minister] TANAKA Kakuei’s birthplace!’. Some people would mention rice, but nobody had heard about Nagaoka. I almost developed an inferiority complex for being from a place nobody knew about. But now, more and more people are familiar with our festival. They say things like, ‘ah, that’s where they make those incredible fireworks, right? I want to check them out some day’. It makes me feel proud of all the hard work we’ve done over the years.”

Originally, the Nagaoka Festival was a very local affair. “For the people and by the people,” as HIGUCHI says. The very first firework display was held in 1879, near the Hachiman Shrine, and became a regular event in 1906. However its current version was first held on 1 August 1946, exactly one year after Nagaoka was destroyed in an air raid, in order to remember the city’s past and celebrate its resurgence after the war. “At the time it was called Postwar Reconstruction Festival,” HIGUCHI says, “and generated a lot of controversy because some people objected to the celebrations, considering that the rebuilding process was still far from finished. The festival organisers, on the contrary, saw it differently. After experiencing such a terrible tragedy, the people of Nagaoka needed cheering up, and they thought that such an event would give them the strength and courage they needed to rebuild their city. Indeed, even today the festival’s motto is ‘Remembrance·Renaissance·Peace’.”

Even today, controversy seems to play a part in the festival as it continues to grow. “In the last few years the increasing popularity of the fireworks has attracted more and more people,” HIGUCHI says. “It got to a point when the whole thing was becoming more and more difficult to manage, and we had to deal with this urgently. Eventually, we decided to create the Nagaoka Fireworks Foundation.”

“However not everybody was in favour. To begin with, Nagaoka has never been a tourist town, and the event’s originators never thought about turning the festival into a tourist attraction. But, as I said, we had to do something to deal with the festival’s growing popularity. Actually Nagaoka was the very first city in Japan to create such an organisation.”

The main reason for establishing the Foundation was to avoid the fate of many other matsuri around Japan. “In Nagaoka we realised that times had changed,” HIGUCHI says, “and the only way to survive was for the festival to change with the times and become a tourist attraction to appeal to visitors from other parts of Japan. This, of course, doesn’t mean we’ve abandoned our traditional values and the ideals the festival stands for.”

The Nagaoka Festival’s recent claim to fame – the Phoenix display – has its origin in another sad page in the city’s history. On 23 October 2004, Niigata’s Chuetsu region, where Nagaoka is located, was hit by an earthquake of magnitude 6.8, which killed 68 people, injured 4,805, and caused the first ever derailment of a Shinkansen. During the next five days, the region around Nagaoka was rocked by 15 more earthquakes.

“Following the example of our fathers who had developed the firework festival after the war, we decided to create a new event to pray for the region’s reconstruction,” HIGUCHI says. “Eventually, we managed to put together 10 million yen for a new firework display, which we called Phoenix. We experimented with different sizes and shapes, and eventually settled on the current format – nine launching spots over a total length of two kilometres. During its five-minute duration, a blue phoenix appears, and it’s said to bring good luck to those who manage to spot it.”

The Phoenix display is always accompanied by Jupiter, HIRAHARA Ayaka’s uplifting hit song. “As you can imagine, everybody was feeling depressed just after the earthquake,” HIGUCHI says. “At the same time, Jupiterwas being played nonstop on the radio. The song’s lyrics include the phrase “you are not alone”, and apparently everybody was requesting this song because it gave hope to the victims of the disaster. We thought that the song would be a good match for our ‘music starmine’, and HIRAHARA was kind enough to let us use it”.

Music starmines are among the latest additions to the ever-evolving art of firework displays. Computers are used to synchronize fireworks and music in order to create a total experience in which the visual and aural element overlap and enhance each other.

If you are interested in traditional festivals, we recommend a visit to Nagaoka. While the Winter Fantasy event is held in freezing temperatures and only features the firework display, the main three-day festival in August also has a toro-nagashi (floating paper lanterns) event during which a host of small boats, carrying lanterns as an offering to the souls of the dead, are floated down the river, creating a truly magical spectacle.