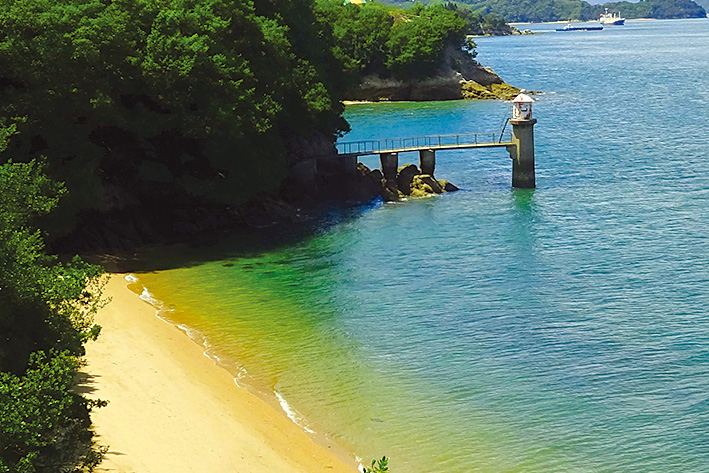 A major shipbuilding centre, Innoshima has lost some of its splendour, but retains its charm.

Only six people joined me on the small white boat that would take me from Imabari, in Shikoku, to Innoshima,
one of nearly 3,000 islands scattered around the Seto Inland Sea. They were clearly local commuters and only wanted their ride to be as quick and uneventful as possible. I was the only one who opted for the top deck to breathe the fresh salty air. Just before leaving, the steward wearily looked at me like I was trouble, and urged the passengers not to leave their seats while the boat was moving. What a killjoy, I thought. I decided I would go up and down the stairs as much as I bloody liked.

Then the boat left the dock and suddenly lurched ahead on a mad dash across the choppy waters. Only then I remembered reading in my guide that this was a high speed boat. The whole contraption started jumping, rolling and shaking like it was going to fall apart, and all I could do was just hold on to my seat to avoid being thrown overboard. Once in a while, the steward peered from inside the pilot cabin at the blasted gaijin (foreigner) who wouldn’t follow the rules, had little common sense and, just before departure, had even inadvertently pushed the alarm button (sorry!).

We were now entering a maze of smaller islands, bouncing like a pinball from one to the next. I could see two of the Shimanami Kaido bridges and, in the distance, a small port with a cluster of tall pale green cranes working on a couple of massive cargo ships. That was Innoshima, one of the biggest islands in the area, and the port of Habu, my final destination.

Getting off the boat, a fat woman with a bad leg and a contagious laugh fell into step with me. I tried to engage her in conversation. “Yeah, it’s nice and sunny but just too hot, especially when you have to go to the hospital. By the way, your Japanese is good! I’m glad more foreigners can speak Japanese so we can have a chat once in a while.” Then she waved me goodbye and climbed on a bus.

Innoshima was once the headquarters of the Suigun pirates who were active during the middle ages. Nowadays, however, it is a much more laidback and welcoming place. Habu, in particular, is a town that moves at its own pace, and sometimes doesn’t move at all; a place where old men wearing sunbleached baseball caps and short brimmed hats sit for hours on the waterfront watching the coming and going of an endless stream of boats and ferries.

Innoshima boomed at the beginning of the last century as a centre of shipbuilding, and Habu used to provide accommodation to the thousands of ship workers. Only a few shipyards have survived to the present day, and the town itself may now look more like a sleepy fishing village, but the port is still far from dead.

Habu is a quintessential marine town. The area behind the docks reminded me of the small fishing villages near my hometown; tightly packed wooden houses where, for once, strolling aimlessly and even getting lost is a real pleasure. You get the sense that there are actual people living behind those doors, even though you hardly see anybody out in the street at 9:00 in the morning. Most of the shops were still closed, the only open one was the booze store. Still, the shopping street – the lovely named Ai Habu Dori (a pun on “I got love”) – was much livelier than the empty ghost arcade in Imabari. They even had a lingerie shop!

After exploring every nook and cranny, it was time to fill my stomach. I was after Innoshima’s specialty, in’oko, a local version of Hiroshima’s signature dish – layered okonomiyaki savoury pancake – where soba is replaced with udon. Alas, all three restaurants were closed, but I had my beloved udon anyway. The unassuming diner I found had all kinds of sumptuous set lunch menus, and after weighing up all the options I went for an udon soup and tempura over rice combo one of the best meals of my entire trip.

As in many local diners, the TV was on and the weather report caught my attention. The dreaded typhoon No.10 was fast approaching from the Pacific. The Awa Odori festival in Tokushima had already been cancelled for safety reasons. According to the worried looking lady on the screen, the next two days would be full of wind and rain, with waves as high as 3.5 metres just when half the population of Japan was planning to leave for the Obon summer holidays. On the 15th, in particular, the full moon would make things even worse, so everybody was advised not to go strolling on the beach or the waterfront.

After lunch, it was time to catch the bus and head to the other side of Innoshima for a well deserved swim. I left Habu thinking that I wouldn’t mind spending some time there. The scene I found when I reached Shimanami Beach was quite surreal and made it clear how much people’s attitudes toward bathing and beach going have changed in the last few years. Most adults, and even a few children, were fully clothed, ex posing as little skin as possible to the sun’s rays. When not in the water, many stayed inside tents they had put up on the sandy beach or in the adjacent park, under a tree. In fact, the beach goers were far outnumbered by those who preferred to pay good money to go to the much more crowded Amenity Pool on the other side of the road. Which all makes sense when you think about it: why get messy in the sand when you can enjoy a clean, chlorinated pool, rubbing shoulders with other fully clothed people?

Luckily, the youngsters did their best to balance things out. The local rebels without a cause were on the beach, twisting and shouting and oozing hormones from every pore. The more daring ones even went so far as to jump into the water from the three metre high boardwalk, boldly ignoring a sign forbidding such dangerous and reckless behaviour. I felt like I was watching a remake of Crazed Fruit, the 1956 film that started the all too brief season of the wickedly spoiled taiyozoku (Sun Tribe) generation. The present day version may lack their viciousness and nihilistic tendencies, but like those mid fifties brats, they worship the sun goddess and know how to have fun.

The orange brown sand beach looked a little too crowded for my liking. Besides, from my vantage point on the boardwalk I could see groups of jellyfish menacingly hovering close to the swimmers. So I excused myself and went looking for the lighthouse. The strait separating Innoshima from Mukaishima used to be a very busy shipping route, and a lighthouse was built in 1894 to guide the ships. Nearby, I found a wooden building. Erected in 1910, it was where information about tidal currents was transmitted to the vessels sailing by. It was closed in 1954 and turned into the Lighthouse Memorial Hall, now a civil engineering heritage building.

The pure white lighthouse overlooks another sandy beach, which on that day was only occupied by a few people. I joined them in the warm water flanked by two historically important products of human ingenuity: the small lighthouse on my left and the massive Ohama Bridge on my right. For a few moments, I let myself float among the seaweed. Then a lone jellyfish came along and I scuttled back to the safety of the beach.