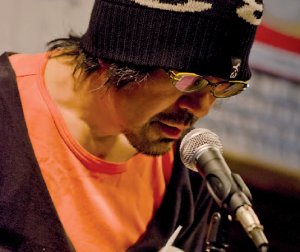 Writer Furukawa Hideo has previously told us how important it is for him to read his work in public. “One could say that I like to embody my writing. There’s something interesting about my foreign readers: they understand what I’m trying to express despite my reading in Japanese. I also like meeting the readers. Reading is an eminently solitary experience, but when I read to 50 or 100 people, we are all experiencing the book together. It’s a very powerful moment. And on reflection, in the past literature was something that was read in public. So I could say that I claim to belong to that tradition. In my opinion, contemporary literature has become so sophisticated that it has lost some of its power. I want to reconnect with its primitive energy, ” he says with conviction. Together with poets Suga Keijiro and Ishida Mizuho, the writer will achieve his wish to express his writings physically during several events in France and in Great Britain. The presented works will look at the consequences of the March 2011 earthquake from the perspectives of both nature and humanity. One of the topics that all three writers will tackle in front of the French and British audiences is the Fukushima Dai-ichi nuclear accident and its effects on the daily lives of people who had already suffered damage from the earthquake. They will also question what the future holds for these people. “Of course I would like the Tohoku region to be saved, for its people to actually get proper help, and for the government to tackle the real danger of nuclear energy. One of the main consequences of March 11th was to bring us closer together and force us to face the same reality that we previously all experienced on our own,” tells Furukawa, himself a native of Fukushima. With the translation of his work: Belka, Why Don’t You Bark?, Furukawa Hideo’s fame spread far beyond the borders of Japan. This is not yet the case for his two associates but Suga Keijiro and Ishida Mizuho are bound to make an impression too. Both poets have received some major Japanese literary prizes and have a presence and literary quality that match the energy that Furukawa invested in the theatre when he was younger. This unique opportunity mustn’t be missed, so it is a good idea to book in advance!