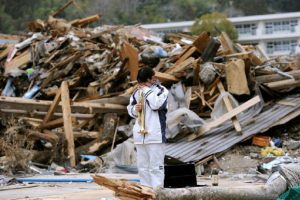 The Asahi Shimbun, the second most widely sold newspaper in Japan, publishes deeply moving photos relating to the earthquake on the 11th of March 2011.

The hills, the valleys, the headlands and the sea are landscapes that are just as touching as human lives; amidst the hectic nature and the deadly phantasmagoria, the unbridled flight of irreversible time towards infinity is easier to observe. Everything dies and is reborn faster. Death is more menacing than in the Western world. Here, the thinking reed is fragile and if it were to think too much it might be scared of it own frailty”. These are the words that journalist Ludovic Naudeau used to describe Japan’s temperamental nature and to evoke “the bravery of the Japanese” in his book entitled Modern Japan that dates back to 1909. The man who covered the Russo-Japanese War of 1904-1905 “fell under the charm” of the Japanese whose courage impressed him. He considered, as did the British historian Henry Thomas Buckle, that men’s behaviour was the result of a collision between two sets of phenomena: what happens inside them, internal phenomena; and what happens around them; external phenomena.
Thus, the violence of some of the natural phenomena in the archipelago contributed to making the Japanese population brave and capable of standing up to calamity. That capacity to face up to misfortune fascinated the French reporter just over a century ago, and it continues to affect the minds of journalists worldwide, especially those who covered the earthquake of 11 March 2011. Among the first to arrive on the scene were Asahi Shimbun’s journalists. Just like all its fellow newspapers, Japan’s second daily newspaper (with 10 million issues sold every day) dedicated a considerable amount of space to what happened on that day at 2:46 pm. The pictures taken in various cities on the northeast coast (Kamaishi, Ofunato, Miyako, Rikuzentaka, Minami Sanriku and Ishinomaki) deeply moved the whole country. Two years after this tragic event, an exhibition is currently being held in London with a selection of pictures for the public to remember and understand the immensity of the reconstruction. In 1923, a few days after an earthquake devastated a huge part of Tokyo, the French author Paul Claudel, then the French ambassador in Japan, wrote in his journal: “A humble and tenacious people is already at work reconstructing. They each come with a pickaxe, a basket, a handful of rice, a plank, a piece of cloth, a sheet of zinc, and on all sides small shelters rise up, as fragile as silkworm cocoons”. Until the 17th of March, visitors can discover the reality of an unprecedented natural disaster. The pictures are beautiful, despite the nightmare they recall. They encourage reflection on our fragile existence. Yet one may be entitled to question why the Mitsubishi Corporation has organized this exhibition.
It’s as if the company were trying to regain its good conscience. The Asahi Shimbun could have organized this all by itself. Nevertheless, none of these pictures will leave you indifferent.