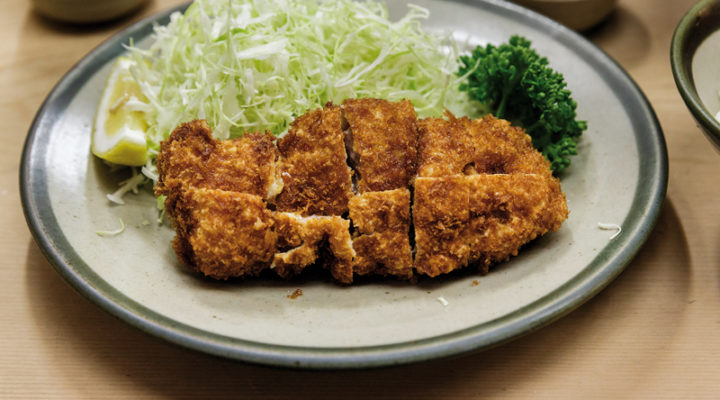 Nowadays considered to be one of the country’s favourite dishes, a look at the history of tonkatsu reveals that it wasn’t always so.

About 130 years ago, amidst great upheavals, Japan opened itself up to the western world. For those Japanese wanting to embrace western culture as rapidly as possible, it meant radical changes in their everyday lives. Traditional hairstyles and clothing had to be abandoned in favour of English or French fashion styles. They felt it was important to change their eating habits too, in particular by eating more meat, which was still considered a taboo by many at the time. The purest expression of Buddhism advocated a strict vegetarian diet (shojin ryori) and the influence of Buddhism on the population was strong – maybe too strong for the liking of the Imperial rulers. Adopting Shintoism as the state religion was part of a strategy to change customs and allow the Emperor, the religion’s highest representative, to eat meat. In January 1872 the Japanese learned that their sovereign had eaten meat to celebrate the New Year, thus breaking a 1,200 year old taboo. Making the Emperor’s diet public was meant to set an example. However, as historian Pierre- Francois Souyri highlights in his remarkable book; Moderne sans etre Occidental: Aux origines du Japon d’aujourd’hui (Modern without being Western: The origins of today’s Japan), the westernization of Japan initially encountered a lot of resistance. In the highly conflicted society of the time, the change to the Emperor’s diet triggered many incidents, the most famous of which took place on February the 18th when a dozen monks attacked the Imperial palace because they believed the increase in meat consumption across the archipelago threatened to “destroy the soul of the Japanese people”. Despite some success in preventing the sale of meat in rural areas where the influence of Buddhism was greatest, the meat objectors had to accept the fact that it was almost impossible to prevent the transformation of the country, including it’s eating habits. Nevertheless, opening up to western culture and cuisine did not mean a wholesale and straightforward adoption of the foreign recipes, ingredients and eating habits that were being introduced and these were adapted in such a way that the soul of the Japanese people was not destroyed, as the monks had feared.

One dish in particular perfectly symbolizes this evolution of Japanese society: the humble tonkatsu or fried pork cutlet. Its name alone illustrates the Japanese capacity to create something new using several different sources. The first syllable comes from the native Japanese word for pork, whereas the second half of the word, katsu, comes from the phonetic transcription of the English word cutlet (katsuretsu).

The term tonkatsu first appeared in 1929, meaning it took the Japanese nearly 60 years to “digest” the first western-style cooked cutlets before creating one of their own cuisine’s most popular recipes from them.

In fact, around the time Emperor Meiji first officially ate meat, a popular cook book of westernstyle recipes stated that the cutlet should be fried in butter after being covered with flour, egg yolk and bread crumbs. However, butter has never suited Japanese tastes and vegetable oil is preferred for frying, as seen in recipes such as tempura that has been part of Japanese cuisine since the 16th century. The first western inspired restaurant (yoshoku) to serve fried cutlets made a name for itself in 1895. It was called Rengatei and was located in the Ginza district where all kinds of imported products were sold, notably the curry introduced by British sailors. However, the Japanese hardly ever went there and it was mainly a foreign clientele, attracted to the smell of sizzling butter, who frequented the establishment. The chef, Kida Genjiro, realized that the locals would have difficulty getting used to the smell, so he decided to start using oil instead, an innovation that successfully attracted Japanese customers. Rentagei still exists, and is still renowned for being the first restaurant to have served fried cutlets and raw cabbage. 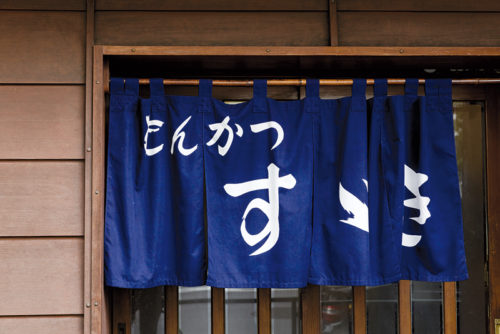 Nowadays, tonkastu is always served with raw chopped cabbage, in contrast to the European convention of always serving a cutlet with cooked vegetables. This says a lot about how the Japanese are willing to accept novelty as long as it is adapted to their own tastes; an original way of saying that tonkatsu is neither a Milanese nor a Viennese escalope. Apart from using pork rather than veal, which the local population much prefers, another big difference is the thickness of the cutlet. When Japanese cooks first started preparing cutlets, they were for foreign customers used to eating with a knife and fork. So the meat was lean and thinly sliced, as served in Europe. Despite the authorities attempts to encourage people to adopt the use of knives and forks, the Japanese remained very attached to their chopsticks. The manager of the restaurant Pinchiken, Shimada Shinjiro, not only invented the word tonkatsu in 1929, he also decided to use thicker pieces of meat and cut it up before serving to make it easier to eat with chopsticks. The way this dish evolved over sixty years is a very interesting example of how Japan evolved during that important period of its history. From that time onward, tonkatsu became a part of everyday Japanese life, a dish that, like Japan itself, was a compromise with the moderniszation inspired by the west. In fact, many traditional restaurants that were experiencing difficulties in the 1920s started to serve tonkatsu.

Widespread changes however, only really took place after Second World War, particularly in the countryside which hadn’t been as quick to modernise as the larger urban areas. The fact that tonkatsu was now seen as a Japanese dish undoubtedly led to its popularity throughout the archipelago. The other important element of tonkatsu, its sauce, simply named “tonkatsu sauce”, underwent the same evolutionary process as the cutlet itself. Outside of Japan, especially across Asia, tonkatsu is considered to be a typical product of Japanese culinary culture. It became very popular in South Korea in the 1980s thanks to a restaurant in the Jeong-dong district in Seoul which served it with kimchi and danmuji (marinated radish). Nowadays, restaurants in Singapore and Hong-Kong serve tonkatsu to thousands of happy customers who feel this dish represents the very soul of Japan. The thick and crunchy bread crust, that some consider rather tough, envelopes the tender and tasty meat, which hints at the Japanese being rather more complex than one might imagine.
The basic tonkatsu has been adapted in many ways. The most famous being katsudon where the cutlet itself is cut up into pieces with chopped onion, scrambled egg and soy sauce, all served in a bowl of rice. Katsukare is tonkatsu curry served with rice and is a favourite of spice lovers. Other tonkatsu based dishes include the katsu sando, literally “tonkatsu sandwich” often found at supermarkets, kushikatsu skewers containing tonkatsu pieces and vegetables, and tonkatsu ramen that floats the cutlet on a bowl of noodle soup. This wide variety of dishes means tonkatsu has now become a staple of Japanese culinary culture, at least in Japanese eyes. One would not have bet on that happening 130 years ago.