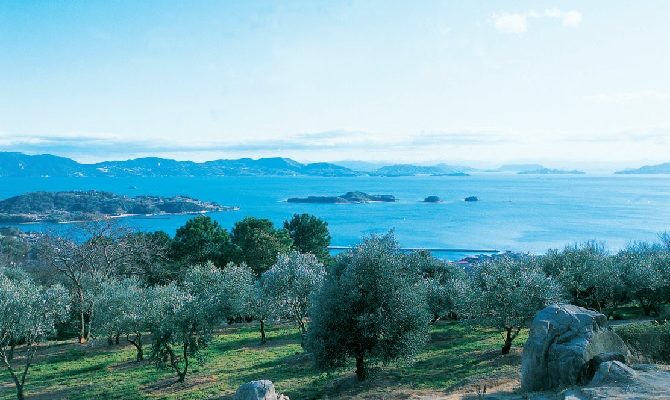 With its 12,000 olive trees, the ushimado Olive Garden is one of the city’s most prized locations.

Situated to the south of Okayama Prefecture, this port city attracts visitors with the riches of its region.

Such landscapes are rare in Japan, aren’t they? A calm sea, boats sailing to the little islands across from the city. People are peaceful, there’s no stress, and the food is delicious,” says Hattori Yoshiro, director of the Ushimado Olive Garden. From his olive grove, the hill offers a stunning view across to the islands of the Inland Sea. The climate, like the waves on the shore, is calm and gentle, the sky, blue and cloudless, encourages you to take a walk, and it is easy to imagine a joyous summer punctuated with swimming and other nautical activities. This breathtaking observation point is surrounded by 12,000 olive trees, which highlight its resemblance to the Mediterranean but there’s another reason for comparing the Ushimado coastline of Setouchi to the Aegean Sea. Hattori continues to stroll around. “This garden is very much appreciated by young couples,” he says after noticing two students kissing on a bench. Aged 32, he’s just taken over the garden his grandfather created in 1942. It’s a city institution, and a source of local pride, as products made from the 10 tons of olives produced by the business every year are famous across the country. “We produce extra-virgin olive oil, but our main activity remains cosmetics, which we have made since 1949” he explains, adding that “An olive grove is difficult to cultivate in the archipelago, because typhoons sometimes rip out the trees. And there’s an insect that’s currently spreading rapidly across Japan, the hanakizoumushi, which makes holes in the olives. It’s a nightmare!”.
However, that hard work is rewarded, as the quality of Ushimado’s olives is renowned across the whole archipelago. Hattori tells us about his range of cosmetics, such as body oil, soap and bubble bath. “We have a little cosmetic garden in which we grow roses, geraniums and rosemary. We don’t use artificial colouring. All ingredients are plant based. We highlight the many benefits of olive oil. Did you know, for example, that olive oil bubble bath keeps the water hot even after you get out? It’s very handy in winter”. There is another Japanese island famous for it’s olive production though. “It’s Shodoshima, which we can see from the hill. But it has a different fragrance,” Hattori explains. In Ushimado, everything is handmade, no machines are used, not even for harvesting.
While walking through Setouchi, you soon notice that this small city, in the rural prefecture of Okayama, takes great care to promote its local natural produce and its small-scale traditional crafts. As a farming region, it’s proud of its vegetables, as well as its oysters, which are ranked second for quality in the country. It’s also known internationally for its pottery and its know-how in crafting traditional Japanese swords. All the residents seem to be involved in the promotion of this local know-how; they all sell each others products, as well as cabbages, tomatoes or salad from the local farms.
After twenty years of working at Canon in Tokyo, Okura Hideyoshi returned here “to take over Ichimonji, my mother’s udon (wheat-flour noodles) restaurant,” he says. At the time he had no idea of what his life as a noodle restaurant manager would be like. “When I started in 1995, I wanted to do it wholeheartedly. I said to myself that if I was going to make noodles, I might as well know everything about them from A to Z” he recalls. He did his research, and found a recipe made from local flour that nobody else was producing. He decided to invest and grow the cereal himself, to relaunch its production. Then he equipped his restaurant with a flour-making machine. “At first it was incredibly difficult. I’m an autodidact, I learnt as I went along, and it took time. The taste was too different from what my competitors offer as they import their noodles… Customers preferred theirs because the taste never varied”.
However, Okura persevered and his son came to give him a hand. “With his help, I was able to perfect my technique faster” he says. Nowadays, the restaurant is never empty. He also grows his own vegetables and raises ducks organically to serve with with the udon. “Since 2012, I’ve worked solely with local producers. Everything that’s served in my restaurant is 100% produced in Setouchi,” he maintains proudly. He has even received an award from the Ministry of Agriculture and Forestry for his efforts in the production of konmugi, his famous long lost flour. Okura Hideyoshi is also one of the organizers of Setouchi market, which takes place on the last Sunday of every month, just a few steps away from his restaurant.
This promotion of everything local goes hand in hand with a respect for the produce and an avoidance of waste, expressed as “mottainai” in Japanese. Akiyama Hideyuki has made his profession out of this ethos, by creating a shop that is unique in the world. “When I was little, I used to love dagashi, those Japanese sweet and savoury treats that could be found everywhere for a dozen yen. With a hundred yen of pocket money, I was the king of the world,” he recalls. Nowadays, these dagashi shops have practically all disappeared from the nation’s streets to be replaced by supermarkets. Akiyama expresses how “Opening this shop meant preserving the dagashi tradition as well as trying to reduce waste”. 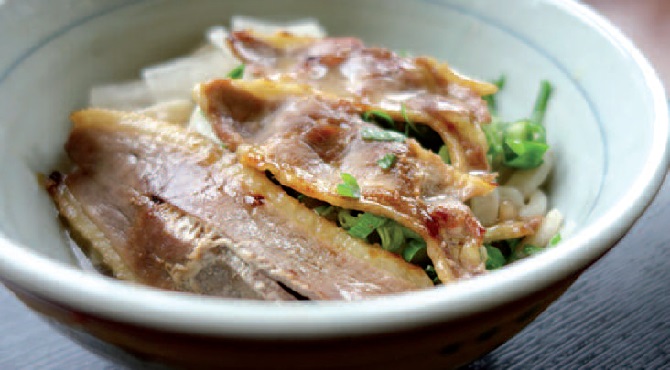 The duck udon served at Mr Okura’s restaurant is full of flavour.

His shop is just like Aladdin’s cave. There are over a thousand different kinds of confectionary costing between 10 and 100 yen. 35,000 customers visit his shop every year. “And 98% of them are Japanese. This reminds them of their childhood, they enjoy it” adds Akiyama, who also works hard contacting all the big Japanese sweet manufacturers. “I buy all of their unsold stock of confectionary that is close to its expiry date, but still edible, and I sell them here for 10 yen… That way, everybody can enjoy them”. For several years, he’s also travelled abroad to introduce other countries to confectionary that exists only in Japan. Last year he was in France and went to Paris and Nancy. “Children seemed very happy to discover these new flavours. We also presented a kamishibai show (paper theatre). Dagashi used to be handed out during these performances, so I introduced them to this tradition”. Akiyama continues to tell us about his philosophy of Japanese sweets; “there are two key words to describe dagashi: genten (origin) and eigao (smiling faces). I believe this tradition carries a strong message of peace,” he adds.
This peaceful and united city is also very generous. When the earthquake struck northeastern Japan on the 11th of March 2011, Watanabe Koichi, Yukiko and their four children saw all their buildings and their oyster business in Minami-Sanriku disappear before their eyes. From one day to the next they had lost everything. “I wanted to leave and start up again elsewhere, take over a company that had no successor to take charge of it,” says Yukiko. But it wasn’t a simple task. “We knocked on many doors… we got many refusals until we went to a meeting on oyster farming in Tokyo. A delegation from Setouchi was there and we got along well. They were looking for someone to take over the Ushimado oyster farm. We jumped at the opportunity,” she recalls. Rearing to go, the couple adapted to new ways of working. “The regions all use different methods and tools for doing things,” she explains. The business expanded and the Watanabes now employ 12 people in Minami Sanriku after starting out with just the two of them in the beginning. This mother of four daughters is also reassured for another reason, as the Okayama region is known for being relatively safe from earthquakes. This comfortable lifestyle attracts more and more people from other prefectures. It’s called the “uturn” phenomenon – people born in the big cities deciding to settle in rural regions. “65 people from neighbouring regions, mainly from Hyogo Prefecture but also from Tokyo and Osaka, settled in Setouchi in 2016,” explains Kosugi Kinsuke, a municipal worker. “They’re between 20 and 40 years old, and are principally motivated to settle here for the lifestyle and the fact that there are fewer natural disasters. Other reasons include business opportunities and wanting to change jobs” he reveals.

Setouchi is famous for its traditionally crafted swords.

Takasaka Tomohiro, originally from neighbouring Tottori, made his dream come true when he opened his cafe, Kinoshita Shoten, in Setouchi. He’s only 25 years old and manages a business that employs four people. His café offers a sophisticated selection of coffees, as well as sandwiches and salads made following the principle of “zero food miles”. “I love it here. There’s a great feeling of solidarity. It’s a wonderful way to live, and to top it all, the climate is ideal – it never snows. I’ve always wanted to run my own shop with delicious hot drinks and snacks to complement the coffee” he enthuses. Takasaka’s shop is one of the most popular places to go for lunch.
A few steps away from Kinoshita Shoten is painter and poet Takehisa Yumeji’s childhood home, and it’s open to visitors. It was transformed into a lovely museum where you can learn more about this artist who is venerated by many Japanese. It also houses several of his works. Takehisa’s style is unique: clean lines, fine silhouettes, few details but poignant simplicity. Setouchi takes great care to preserve these buildings and these local skills. Another example can be seen in Shiomachi Karakoto street, that takes you back to the Edo era (1603-1868). Two other unmissable sights in Setouchi are Ushimado temple and Bizen-Osafune’s Japanese sword museum, where visitors can learn about the traditional craft of katana making with the help of detailed explanations available both in English and French. The best time to visit is on Sunday, to watch the city’s last 5 to 7 craftsmen at work.
JOHANN FLEURI

No53 Ogasawara: The treasure archipelago