The Tokyo National Art Centre is holding an exhibition dedicated to this exceptional artist until the 22nd of May.
When asked to name internationally famous Japanese artists, most people will probably answer Ono Yoko (whose brilliant career is perennially obscured by her being Mrs John Lennon) or Kurosawa Akira. However, few people can match Kusama Yayoi’s presence on the world stage and the profound influence she has had on many contemporary artists. After all, she recently ended up in Time magazine’s list of the world’s ‘100 Most Influential People’ – the only Japanese to make the list. To many people her name may not be familiar, but her polkadotted works and brightly coloured giant pumpkins are instantly recognizable.
Last year, Kusama’s In Infinity exhibition toured Scandinavia, while Infinity Mirrors is currently being shown in a few cities in North America. However, the best place to be right now if you are a Kusama fan is Tokyo, where the National Art Centre is showing My Eternal Soul, one of her biggest exhibitions to date and a tour de force covering the artist’s entire career from her early beginnings to her most recent work-in-progress project. Chronologically speaking, the exhibition starts at the end: we enter a huge space whose walls are covered with 132 pieces never-beforeseen in Japan. These large scale works belong to the 500-painting strong ‘My Eternal Soul’ series, on which Kusama has been working frenetically since 2009. 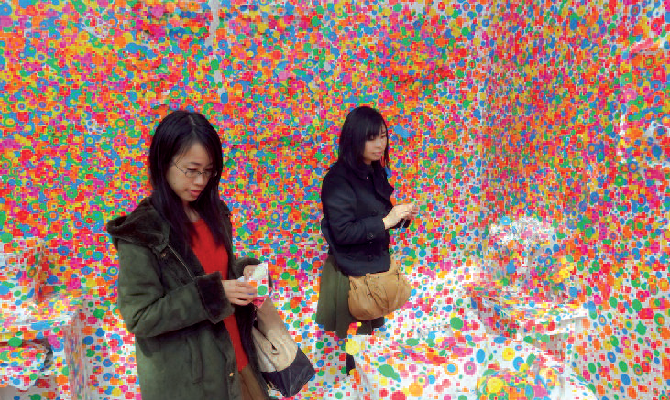 In the only room where photography is allowed, the visitors become elements in a work of perpetual motion.

No53 [Book] Tokyo, the capital of pop culture