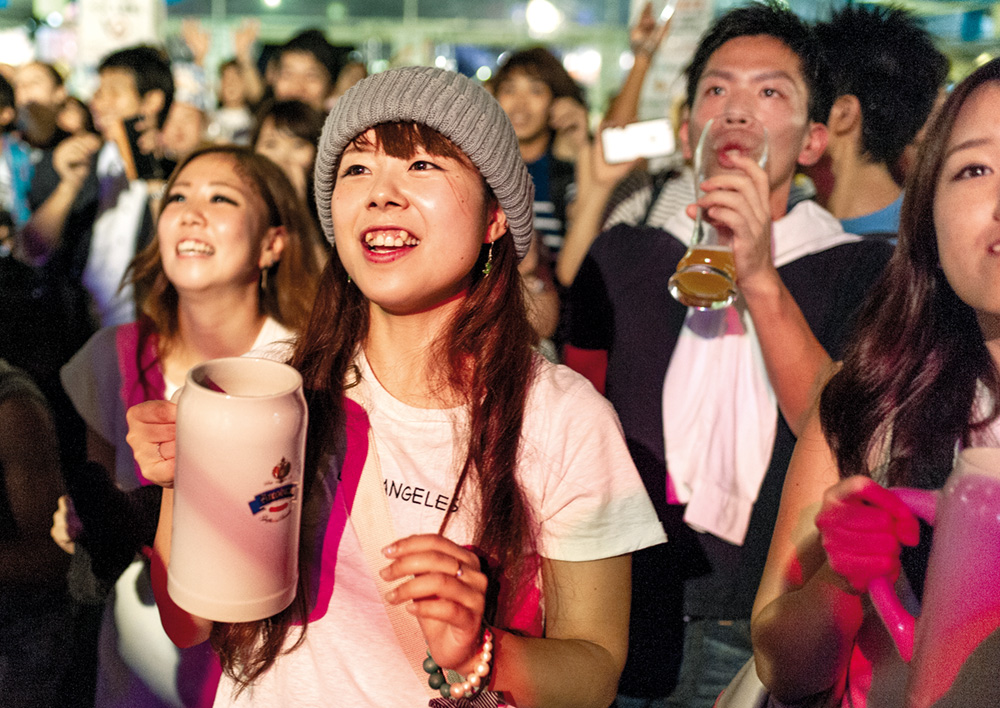 The Japanese love beer, but it does not always share the same characteristics as beer drunk in Europe.

Though the current beer market resembles those in other countries, it has undergone many changes over the past century.

Beer-making in Japan is about 400 years old, and Japanese beer-brewing is as diverse and dynamic as traditional alcohol sectors such as sake and shochu.

It started with Dutch merchants who first im- ported and then brewed beer themselves at their trading post in Nagasaki during the Edo period (1603-1868). they even opened a beer hall to quench the thirst of the sailors who worked the trade route between Japan and the Dutch colonies.

Apparently, they even gave some to TOKUGAWA Yoshimune in 1724. the shogun is famous for relaxing the nearly century-old rules against importing foreign culture and goods, and encouraging the translation of foreign books, thus initiating the development of western studies, or rangaku. According to Jason Joseph- son, Yoshimune’s relaxation of the rules was possibly influenced by a series of lectures delivered to him personally by the astronomer and philosopher NISHIKAwA Joken, but his appreciation of beer may have played a role as well. Be that as it may, beer consumption in Japan remained relegated to the Dutch enclave on Dejima Island and a few lucky Japanese until the second half of the 19th century. A second encounter with the western beverage took place when Commodore Perry arrived in 1853 to force the country to open up to foreign trade. According to contemporary reports, some of the Japanese negotiators who were invited aboard the USS Susquehanna got pretty drunk. Shortly after, the father of Japanese chemistry, KAWAMOTO Komin, put his knowledge to good use by becoming the first Japanese person to make his own beer. He published his brewing method in 1860.

The first wave of imported beers followed the establishment of western settlements in the 1860s, in the group of ports that the shogunate had opened to foreign trade. In the next decade, several British brands and Bavarian lagers were imported into Japan, but the market was allegedly ruled by Bass Pale Ale, an English beer predominantly made with pale malt by Bass Brewery, at the time the largest brewery in the world.

In the late 19th century, beer was still the kind of expensive product that only wealthy people could afford to buy. those who wanted to experience the thrill of tasting this exotic drink but did not have the money to try the real thing were left with “imitation beer”: barely drinkable concoctions made locally and put into used beer bottles in order to look authentic. they probably tasted awful, but the bootleggers must have done brisk business because the authorities were forced to ban fake labelling.

Commercial brewing in Japan started around the same time, again thanks to enterprising westerners. Norwegian-American william Copeland, who had arrived in Japan in 1864, opened the Spring Valley Brewery in Yokohama in 1869. It was located near a natural spring in the Yamate district, under the hill where the wealthy foreign community lived. Copeland dug a 210-metre cave into the side of the hill and made use of its constant low temperature to help the beer mature. the next year, Dutch- man J.B.N. Hecht opened another brewery in the same city, while in 1872 osaka-based SHIBU- tANI Shozaburo became the first Japanese commercial brewer, and in 1876 a government- controlled company, the Hokkaido Kaitakushi Beer Brewery, was established in Sapporo. At the same time, experienced brewers from Europe and elsewhere arrived to contribute to the growth of the local industry.

The next couple of decades saw a boom in beer production, so much so that in 1886 the amount of domestically produced beer exceeded that of imported beer for the first time, and an industrial show in 1890 saw the participation of 83 brands from 23 prefectures. By the end of the century, they had almost doubled in number. Unfortunately, what looked like the making of a dynamic and diverse beer scene was gradually suppressed by the government. Beginning with the enactment of the Beer tax Law in 1901, a process of consolidation and rationalisation took place over the first decade of the 20th century, which gradually put smaller companies out of business. Finally, in 1908, a change in the Beer tax Law required that in order to obtain a manufacturing licence, a brewery had to produce at least 180 kilolitres of beer annually – a quantity that only a few of the bigger companies could manage. In other words, by suppressing domestic com- petition, the same policy that had favoured the emergence of a few big conglomerates in other industrial sectors.

In 1907, Yokohama’s Spring Valley Brewery finally morphed into Kirin Beer and, thanks to the intervention of the ministry of Agri- culture and Commerce, three other major breweries (Sapporo, Nippon and Osaka) merged into the Dai Nippon Beer Company, which until 1949 was the dominant force in Japan with 70% of the market share. on the other hand, smaller competitors such as Sakurada Beer, Kabuto Beer, Lion Beer and the Anglo Japanese Brewing Company were forced to close one after another, or were swallowed up. In 1940, this situation was further reinforced when the minimum quantity of annual beer produced was increased from 180 to 1,800 kilolitres, definitively killing any chance of smaller brewers getting a licence.

From the government’s point of view, the consolidation of the beer industry had two ad- vantages: first of all, it helped fill the State coffers with a huge amount of money (in 1955, alcohol taxes still accounted for a whopping one-sixth of tax revenues); secondly, bigger breweries were more likely to succeed in foreign markets. Indeed, Dai Nippon Beer became known as the “King of Eastern Beers” as it developed into the largest beer company east of the Suez Canal.

On the downside, while the beer industry kept growing into a big moneymaker, the temporary death of microbreweries killed the exciting variety of styles and brewing methods that had characterised the pioneering years. the birth of the typical Japanese beer as it is known today – light, fizzy, nearly tasteless lager – can be traced back to those years. this resulted in a strange situation during the Pacific war years: in may 1943, the use of brand labels was officially prohibited. Instead of their trademarked names, all companies had to use the same anonymous labels simply sporting the generic term “beer”. As all brands tasted the same, they became virtually indistinguishable from one another.

The government’s strict control of beer production and trade continued all through the war years (in 1939, an official rate was imposed, and a rationing system was employed the year after), but things changed in 1949 when the Act for Elimination of Excessive Concentration of Economic Power was enacted. Subsequently, Dai Nippon Beer was split up into Asahi Beer and Nippon Beer (the latter later became Sapporo Beer). Each firm was assigned a capital sum of 100 million yen. Nippon/Sapporo could operate in the area from Hokkaido to Nagoya while Asahi controlled Osaka and western Japan. From the 1950s, the Big Four (in 1960 whisky giant Suntory joined Asahi, Kirin and Sapporo) engaged in a no-holds-barred fight for supremacy in a beer market that in the next two decades kept growing in tandem with the Japanese economy. As all the beer tasted more or less the same, the four companies came up with original ad campaigns to win over the public. In 1958, for instance, Sapporo Beer launched the “Munich Sapporo Milwaukee” slogan, point- ing out that these cities famous for beer were aligned along latitude 45° north. the slogan caught the attention of people who were increasingly attracted to global destinations. In the early postwar period, Sapporo was the new leader of the reformed market thanks to its extensive network of bars in eastern Japan (today, one can still have a taste of the good old times at the Ginza Lion, a beer hall in Tokyo that was first opened in 1934). However, with the change in drinking habits and the introduction of canned beer in 1958, more people started drinking at home. this favoured Kirin, which rapidly overtook its rivals – a dominance that it maintained until the late 1980s when Asahi launched a new product. Asahi Super Dry was an instant success (it sold 200,000 cases in the first two weeks, which rose to more than 100 million cases in only three years) propelling its brewery to the top of the market – a position it holds to this day. 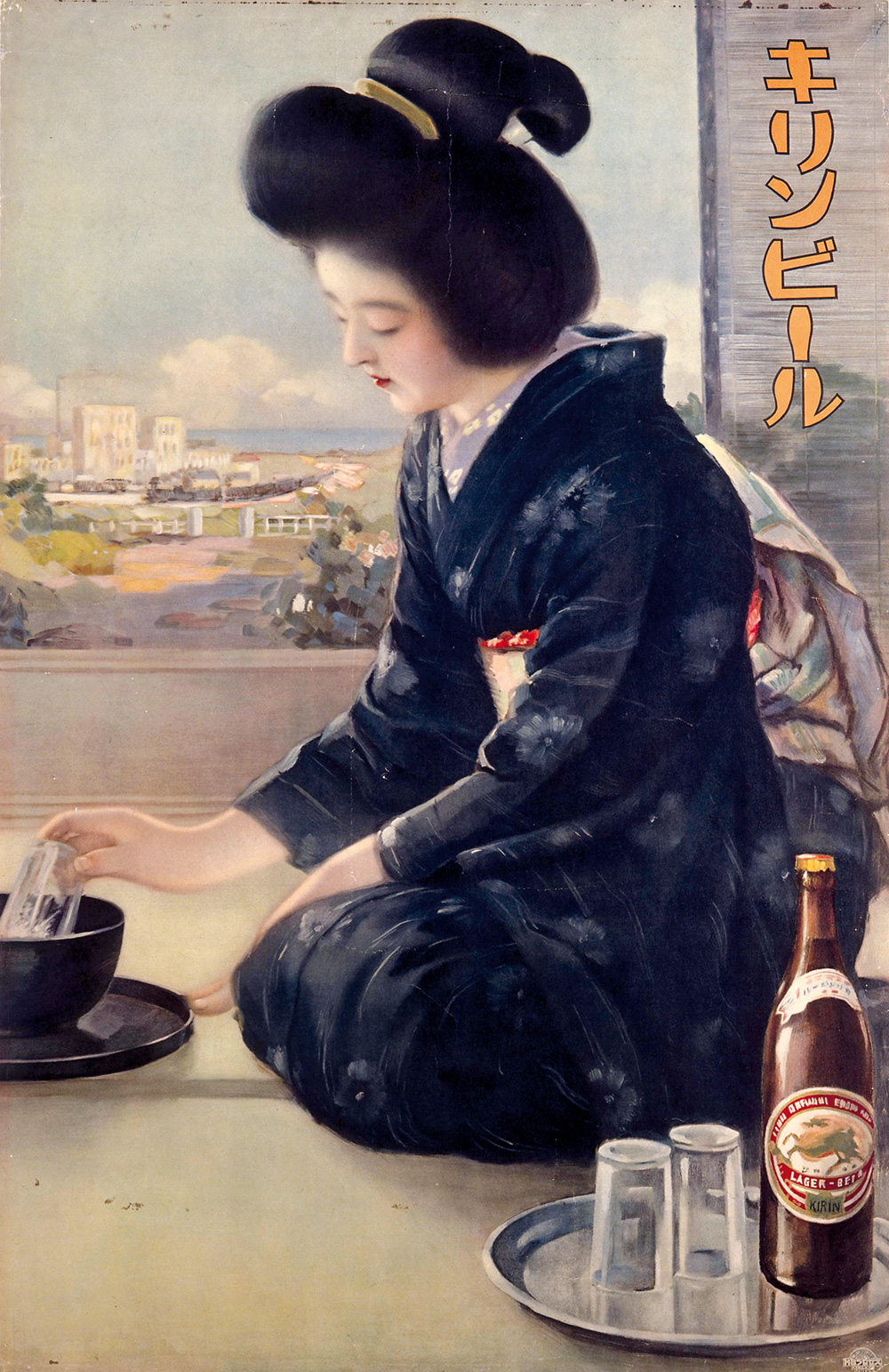 Asahi Super Dry’s success affected the market in two ways: on the one hand, its characteristics (“crisp and refreshing taste, reminiscent of some northern german beers, without the heavier malt flavours of competitors’ products”, according to the company’s ad campaign) made commercial beer even lighter and fizzier (or, depending on one’s tastes, blander) than before. on the other hand, the significant rise in consumer demand for dry beers triggered the so-called “Dry wars” among the Big Four. Kirin’s answer to Asahi’s bestseller was Kirin Dry (launched in 1988 with an ad campaign featuring actor gene Hackman) and, in 1990, it introduced Ichiban Shibori, but the new products, instead of cutting into Asahi’s lead, ended up competing with Kirin Lager and other older beers from the same company. Sapporo fared even worse and halted production of its dry beers after just two years. Suntory, on the other hand, realised that fighting Asahi on its own turf was useless and instead launched a two-pronged offensive, creating Suntory Dry 5.5, a beer with more punch thanks to an increase in alcohol content from 5% to 5.5% (to highlight its strength, the company even hired boxer Mike Tyson to promote the new product). At the same time, it launched a new brand, malt’s Beer, with an “I don’t do dry” campaign.

More recently, in 1994, two market-shaking events occurred. First of all, beer makers came up with a new creation – a low-malt beverage called happoshu to avoid the punitive alcohol tax (see article about the beer market). Further confirming Japanese consumers’ lack of taste (or maybe their love of cheap booze), this sort of “imitation beer” quickly conquered the market, and was later followed by another strange creature “new genre”, containing no malt at all.

In the same year, the government lowered the requirements for getting a beer-manufacturing licence from a prohibitive annual output of 2,000 kilolitres to a mere 60 kilolitres. As a result, many small regional breweries popped up around the country, finally restoring the diversity that had been lacking since the early 20th century. to be sure, not all the 180 microbreweries currently in business make good beers. But ac- cording to the experts, there are at least 20-25 Japanese breweries that make first-class products in a wide range of styles. Even now, when the Japanese think about beer, they only have one thing in mind: chilled, easy- to-drink booze that quenches your thirst. while craft beer in the United States enjoys an enviable 12% market share (22% of the total value of beer sales), and its share in other important beer-drinking countries is between 5 and 10%, in Japan it is still a minuscule 0.8%. However, microbreweries are here to stay, and beer connoisseurs now have a chance to taste a wide range of craft beers that are as good as similar products from the west.