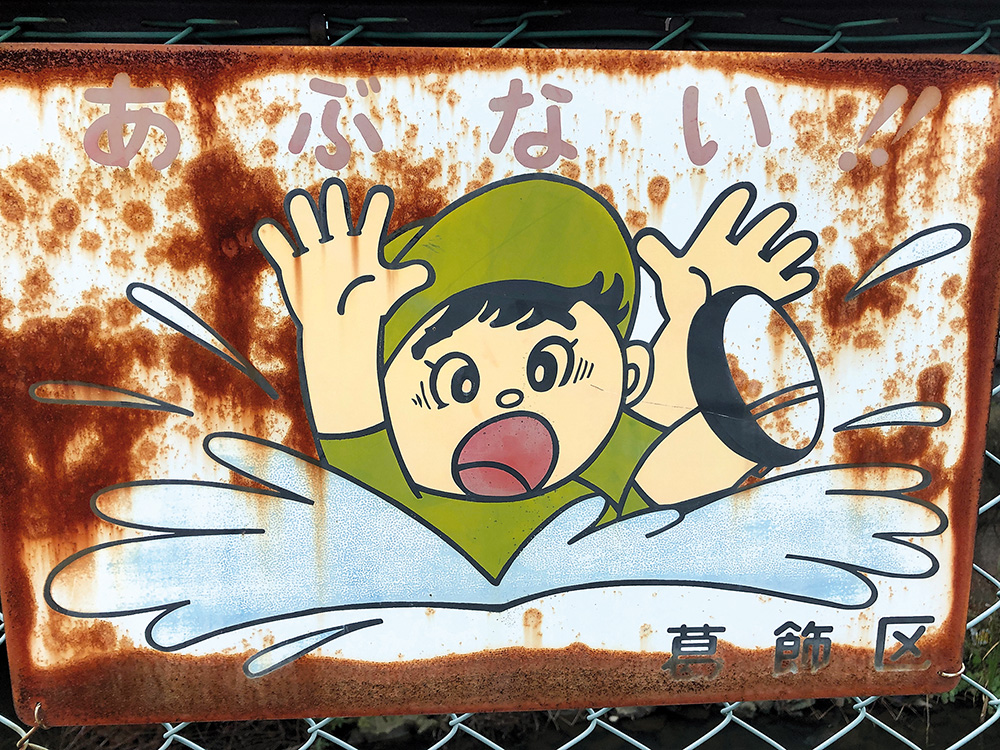 “Beware Danger” is written on this sign targeted at the youngest inhabitants of this district where water is omnipresent.

The last truly working-class district in the capital has partly maintained its immediate post-war atmosphere.

Tokyo is moving faster and faster towards the future, and in the process it’s forgetting or even actively suppressing any trace of its past. In the 70 years after the second World War, less-than-enlightened public policy and unchecked urban development have radically changed the look and feel of the city, erasing precious memories by doing so, and turning complex, diverse places into districts that are shallow and without character.

Luckily, there are a few areas that have managed to partly escape architectural and cultural homogenization and preserve their original character. Katsushika, one of Tokyo’s easternmost areas, is such a place.

Occupying the lowlands next to Saitama and Chiba prefectures, Katsushika is part of the new shitamachi (working-class area) whose population has steadily grown in the last century, and today it’s Tokyo’s ninth most populated area. However, its low density means it ranks only 18th out of 23 areas, making it a quiet place full of green spaces, waterways and old people. In fact, with an average age of 45.7 years, Katsushika is only second to Taito, the oldest area in Tokyo.

In the mid-1800s, the area was just a conglomeration of five small towns and two villages. Fifty years later, its 27,500 inhabitants still lagged well behind Tokyo’s central areas (Kanda had 152,000, Nihonbashi 126,500). However, the 1923 great Kanto earthquake destroyed Tokyo and pushed many people to the city’s eastern suburbs. In 1930, Katsushika’s population had tripled, reaching 84,456.

At the same time, more and more factories opened in the area or moved from the city centre.

In 1930, 126 factories with at least five employees employed a total of 3,900 people. They included Tokyo’s biggest concentration of celluloid factories – 59 out of 258. Years later, these factories – most of them small family-run businesses – would provide the insatiable toy market with millions of Kewpie, Licca-chan and Barbie dolls. Then the Pacific War created a great demand for ammunition. By 1943, the number of factories had risen to 2,350 and its working population to 58,000. Cheap land prices and the presence of many rivers that facilitated transportation attracted the likes of Mitsubishi Paper Mills, edogawa Chemicals, Miyamoto Textiles and Toyo Ink to Katsushika.

Yet, even after acquiring the status of ku (city ward) in 1932, Katsushika still looked and felt like a rural district. Its transformation into a real suburban shitamachi only happened during the country’s rapid postwar economic development. By 1965, its total working population numbered 225,944, half of which was employed in manufacturing and industry. It was during those years that Katsushika acquired that typical showa-era atmosphere (some would say “showa smell”) that today lures many nostalgic fans of the good-old-days to the area.

Since time immemorial, people in this region have lived, worked and played with – and often battled with – water. A quick look at the map clearly shows Katsushika’s close relationship with some of Tokyo’s main rivers. The current area is flanked by the Arakawa and edogawa, and is several other rivers and canals run through it, particularly the Nakagawa whose disastrous flood in 1947, following the passage of typhoon Kathleen, is still remembered to this day.

The inhabitants of central edo – Tokyo’s former name – were endlessly fascinated by its beautifully idyllic landscape, which was depicted by several artists including famous ukiyo-e (woodblock print) master Hiroshige.

The Japanese have long had a symbiotic relationship with water. even today near the banks of the Nakagawa opposite the Tateishi district, you can find a stone monument to suijin-sama, a water deity who is believed to protect fishermen and pregnant women. The locals have traditionally prayed for water to remain unpolluted and pure enough for human consumption and agriculture.

In 1926, the city enlisted the help of technology alongside their prayers and built a water purification plant in Kanamachi, which, even today, serves all of eastern Tokyo, and can pump as much as 1.5 million tons of water from the nearby edogawa.

Katsushika’s waterways were once so clean that they provided many of the fish eaten in local restaurants, and its textile factories used to wash their dyed cloth in the water. Children swam in the canals and hunted for crayfish along their banks. Then the rapid postwar economic growth turned Arakawa and Nakagawa into fetid cesspits where factories big and small dumped their waste. Between the 1960s and mid-70s their waters turned into a brownish slime so that the fish disappeared and people kept their distance. Luckily, environmental awareness developed during the late 1970s, and today Katsushika’s rivers are much cleaner. In 1992, the Kanamachi plant went so far as to add an advanced ozonebased water treatment system, and now even sells its own brand of bottled water, Tokyo-sui (Tokyo Water).

The region’s flora is another recurrent theme throughout its history. The name Katsushika itself is said to come from arrowroot, a plant that once grew in the area, and whose Japanese name, kuzu, can also be pronounced katsu. The name appears several times in the Man’yoshu, the famous eighth-century anthology of Japanese poetry. 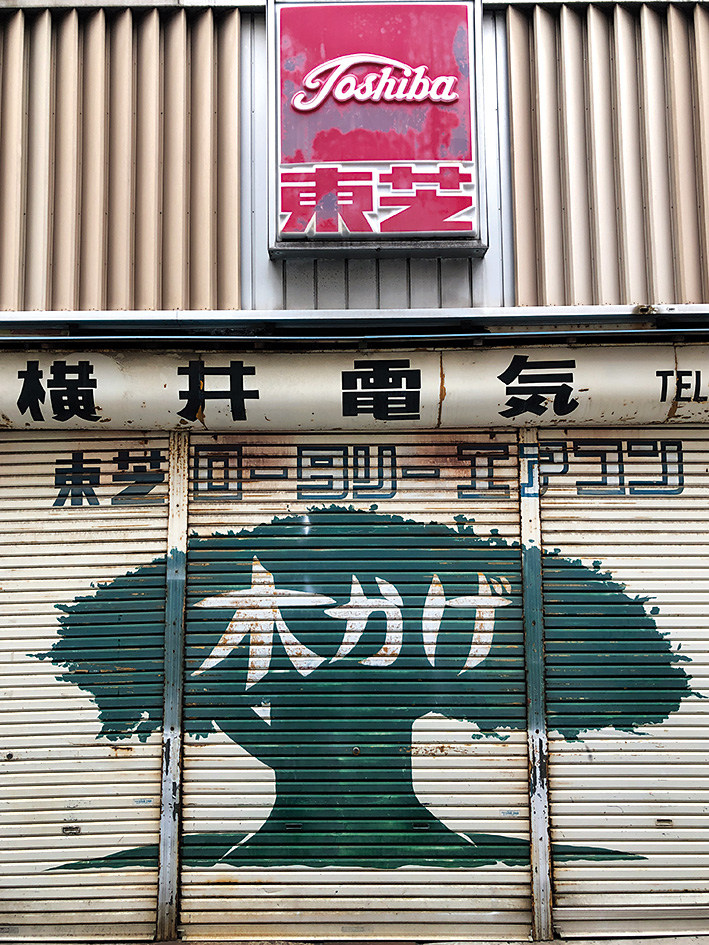 However, the iris is the area’s best-known flower. Tokyo’s best-known iris garden is arguably the comparatively small one in the grounds of the Meiji shrine in Yoyogi, but if you really want to have a sensational flower experience you should come to Katsushika, Tokyo’s real “iris country”. It’s here, in the marshy land along the Arakawa and edgogawa rivers, that you’ll find thousands of irises blooming throughout the month of June.

The most famous is Horikiri garden, near the Arakawa. Created by a local farmer at the beginning of the nineteenth century, it became so popular that it was even immortalised by ukiyo-e artist Hiroshige in his Hundred Views of Famous Places in Edo series. Only one of the five original gardens has survived to this day, so if you really want to be overwhelmed by the spectacular mix of purples, indigos and whites you should visit a more recent (it was opened in 1965), but much bigger park, Mizumoto Koen.

Throughout Katsushika there are pockets of resistance where the old showa-era workingclass atmosphere has survived, particularly in Tateishi, shibamata and Kameari (see following articles). However, in the last twenty years Katsushika’s overall urban landscape has changed in many respects, with several development projects replacing traditional small-town locations with giant apartment buildings.

For example, in 1960 there were 31 independent film theatres. Today they’re all gone, replaced by mammoth ten-screen cinema complexes like the one in Kameari’s shopping mall. Another typical feature that has steadily disappeared are the once ubiquitous chimneys. There was a time when literally hundreds of chimneys towered above a sea of two-storey buildings. Those chimneys belonged to public baths and small factories, and were considered so important in the life of the local communities that they were even mentioned in a number of school songs. They grew rapidly in number from the 1920s and reached their peak during the economic growth of the 60s, but they are becoming a thing of the past. For example, of the 143 public baths still open in 1982, only 39 remained in 2014. The same thing is happening to the small backstreet workshops, which are being driven out of business by corporate chains and the relentless globalisation of the economy.

Yet, though stalls and carts selling food have mostly disappeared from Katsushika’s street, several family-run diners and shops can still be found in each neighbourhood. Tateishi, of course, is the most popular, but other traditional places can be found everywhere, often housed inside run-down two-storey buildings that don’t look as though they’ll stand a chance come the next big earthquake. In shibamata, for instance, the Maenoya soba shop is still going strong, while in Horikiri, dairy goods shop Iwata Milk opened in 1962. even older is sakamoto shoten, which sells miso paste and soy sauce from around Japan, has been in business since 1954, and still sports its old family crest.

Actually, even now there are only a few – often rather dated – shopping arcades, and most residents still shop in the local shotengai – shopping streets lined with small independent stores. Lumiere, for instance, is Katsushika’s oldest shopping arcade (opened in 1959) and its 140 shops are visited daily by an average of 30,000 people.

Finally, change has come in another, somewhat unexpected form: though the area still lacks international hospitals, schools or supermarkets, it has quite a high population of international residents (22,492, as of August 2019), most of whom come from other Asian countries, attracted by its lower rents and retail prices.

To sum up, Katsushika may not be typically beautiful, and its low-key attractions are admittedly quite unassuming, almost downmarket, like some of its cultural icons, but if you slow down and look around carefully, in the narrow backstreets and around corners, you will finally surrender to its charm.