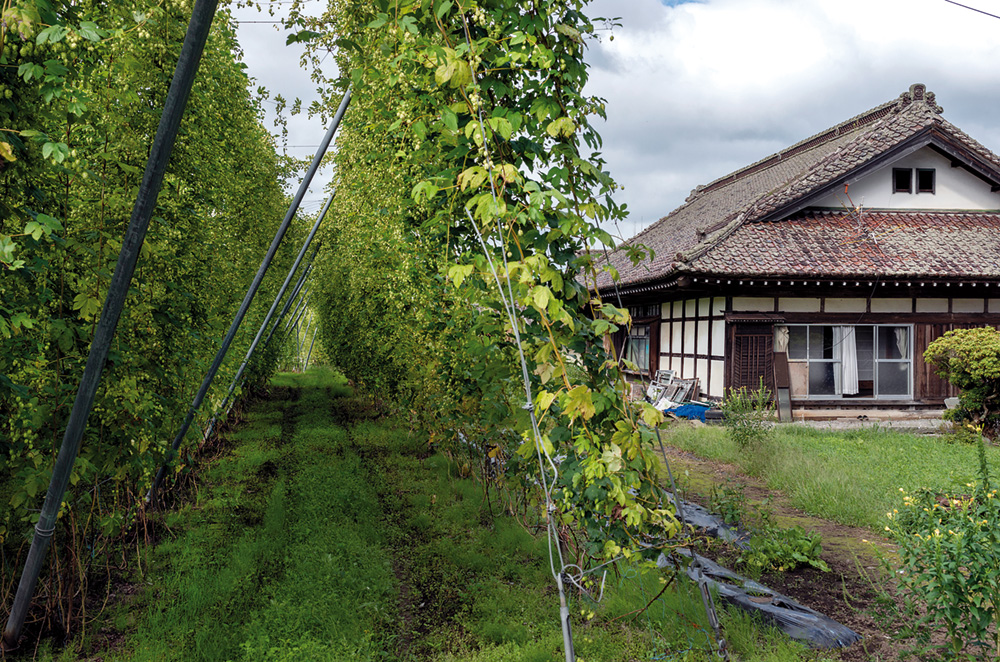 The small town, which is the main producer of hops in the archipelago, wants to become a city of beer!

Yokohama, Sapporo and other big cities may be the main centres of beer produc- tion in Japan, but few places embody the country’s beer culture like Iwate, Japan’s num- ber-one hop producing prefecture. It is here, in fact, that half of all Japanese hops are grown, and the small town of Tono lies at its centre.

Tono’s picturesque farming district is located in a basin surrounded by beautiful mountains. It is said that in ancient times, the whole region was a lake (the syllable ‘to’ in Tono is an Ainu word meaning ‘lake’), and later became a prized area for horse breeding, farming and hunting.

For centuries, the Tono basin was completely isolated from the rest of the prefecture, and as late as the end of the 1980s, a trip to this small town still offered a more or less unadulterated view of rural Japan, down to water wheels and moss-covered wood footbridges over winding streams. Even today, a ride on the Tono-bound Kamaishi Line gives you an idea of how isolated this region used to be. the single-track train weaves its way through narrow valleys and beautiful but intimidating mountains that here and there open up to reveal tiny hamlets and tightly packed rice fields. the forests on both sides of the railway are intricate jungles of Japanese cedars and chestnut trees that threaten to spill onto the tracks, their branches mockingly brushing against the sides of the modest two-carriage train.

For a long time, Iwate’s economic fortunes have been linked to hop farming. Indeed, tohoku is the perfect place to grow hops. to begin with, the great fluctuation in temperature between day and night is said to be ideal for their growth. Also, both humidity levels and the risk of typhoons are relatively low throughout the year. Because of the region’s characteristics, Japan’s major beer companies have long been interested in the area. Tono’s growers, for instance, have developed a partnership with Kirin Beer through which the Yokohama-based company buys the town’s entire hop harvest. this includes native varieties like Ibuki, a hop with aromatic notes of lemon and grapefruit, and murakami Seven, a variety with an aroma of grapes named for murakami Asahi, the Japanese hops researcher and breeder respon- sible for its development. 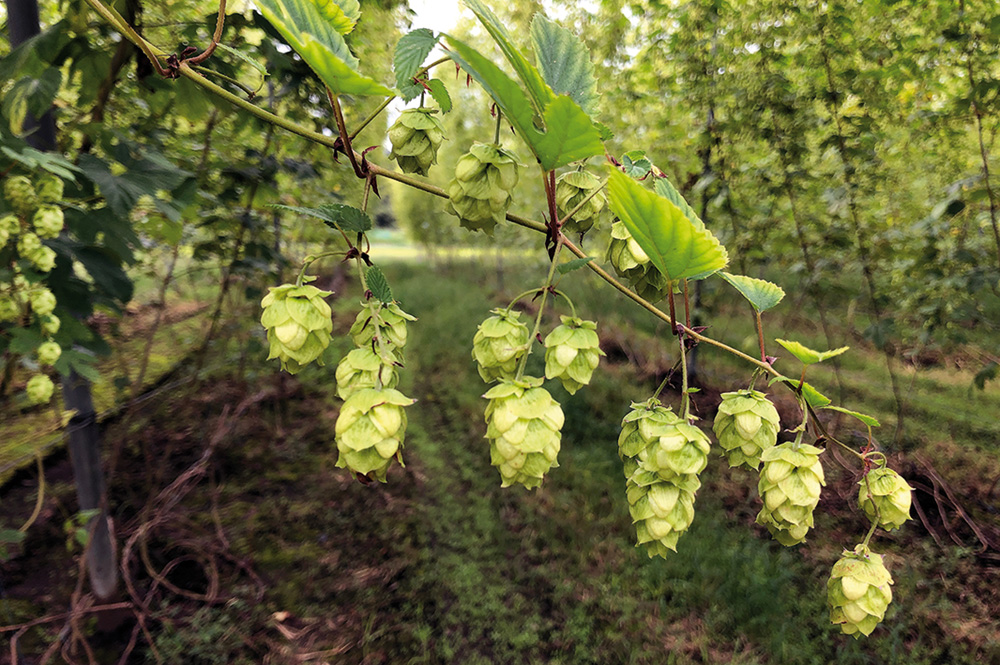 In my quest for fresh hops and good beer, I first paid a visit to the Tono Brewing Company. the latest addition to the local beer scene was estab- lished in 2017 by a trio of out-of-towners who, after a successful crowdfunding campaign, opened a brewery-cum-taproom in the city centre. the company’s representative director, HAKAmADA Daisuke, had previously worked around Japan as a store manager for apparel chain UNIQLo, but came to Tono to join Next Commons Lab, a start- up project aimed at attracting and training entre- preneurs and breathing new life into the local econ- omy. He was one of two people – out of 80 appli- cants – to be chosen to run a new microbrewery. “As a beer lover, I had always dreamed of opening my own brewery,” he says, “but I must admit that in the beginning, it was quite hard. For one thing, we had difficulties finding a good location. Even- tually, we were lucky to find this abandoned sake shop, and thanks to crowdfunding, we were able to renovate it and open our taproom.”

The real problem, though, was nurturing a craft beer-loving community in a constantly shrinking market. According to official census data, the population of Tono peaked in around the year 1960 and has declined steadily over the past 60 years. It is now less than it was a century ago. Also, according to the town hall, 37.6% of the popu- lation is over the age of 65. “Tono only has about 26,000 inhabitants,” HAKAmADA says, “so it’s pretty small to begin with. on top of that, when we opened our taproom, most people were not used to craft beer because they had only drunk Kirin and Asahi all their life.”

To be sure, Tono is not new to craft beer as another, bigger brewery was already operating when the Tono Brewery Company was founded. “Kamihei Shuzo is a long-established sake brewery that for several years has made the Zumona craft beer,” HAKAmADA says. “they are at least five times bigger than us and sell their beer in shops and supermarkets while at the moment we are only focusing on the taproom. So we are not in direct competition with each other. rather, we both understand that the only way to succeed is to work together on different projects and spread the word about Tono’s craft beer. recently, we have even made a collaboration beer with them called one and only Tono Lager. A part of the profits is donated to the campaign to limit CoVID-19 in Iwate.”

Because of the pandemic, HAKAmADA’s taproom was closed throughout April even though at the time Iwate had zero cases of infection. Business has been rather sluggish since then. “recently, even Tono has had its very first case of coronavirus,” HAKAmADA says, “and people are under-standably wary of drinking and eating outside.” this said, on the night I visited the taproom, several groups of people were enjoying their beer and food.

However, CoVID-19-related problems are only part of the picture. more importantly, the local hop industry is shrinking and needs an injection of money, people and new ideas. Tono’s hop- growing tradition is 56 years old but it has been shrinking for many years now and current hop production is about one-seventh of peak levels. “First of all, there is a dearth of young farmers,” HAKAmADA says. “20 years ago, there were 239 hop farmers in Tono. Now, there are only 33, and last year they reaped 43 tons of hops, far below the 229-ton harvest of 1987.” Tono’s sit- uation is mirrored elsewhere around Japan. According to the national farmers’ association, hop yields in Japan have more than halved over the past decade from 446 tons in 2008 to 202 tons in 2018 – only a fraction of the 4,000 tons imported from abroad.

“One reason for the lack of new growers,” HAKA- mADA says, “is that hop farming, compared to other cultivations, requires a higher level of investment. Installing the trellises on which the long and flexible hop stems grow, and doing maintenance costs money. Another problematic issue is the area’s relationship with Kirin. the company’s presence in Tono goes back many years and has monopolised the local market, which means that all the farmers have exclusive contracts with Kirin. this has been both good and bad for the local industry. on the one hand, when a big company like Kirin has your back, you feel safe, protected. whatever you do, you know that you are going to sell your entire har- vest. on the other hand, though, this state of things has created a static environment that does not favour dynamism and innovation.”

Two things must be done to rescue Tono’s hop industry. “Strategically speaking, we have to put Tono on Japan’s craft beer map once and for all. Because the local population is so small, we need to attract tourists and beer lovers from both abroad and other parts of Japan. then, as far as hop production is concerned, we need to improve mechanisation and work efficiency. Local hop cultivation is still done with 30- or 40-year-old methods. It’s very inefficient and results in rela- tively poor harvests when compared to foreign countries such as germany that use the latest techniques. therefore farmers need to acquire new tools and modernise their cultivation methods.

This way, even if the number of farmers continues to decline, we might be able to maintain the same amount of hop yields.”

One person who has had the same idea as HAKA- mADA is YoSHIDA Atsushi. A former ad agency worker from Yokohama, he moved to his wife’s hometown a few years ago to become a farmer, first growing padron peppers, a popular type of pepper often eaten in Spain as a snack to com- plement beer. After switching to hops, YoSHIDA imported a set of large-sized machines from ger- many at a cost of 25 million yen and redesigned part of his fields to make harvesting quicker and more efficient. “By adopting the german method,” he says, “the number of days needed for trimming old bines away from the rootstock, indispensable for starting the year’s cultivation in April, is reduced to about a seventh, and only one worker is required for harvesting, compared with three to seven under conventional meth- ods.” YoSHIDA’s field is currently only 1 hectare wide but he plans to gradually enlarge its culti- vation area to 8 hectares by 2026 through farm- land consolidation.

Back at Tono Brewing Company, HAKAmADA shows me their tiny nanobrewery. Current pro- duction is so small that right now they only make enough beer for their taproom. However, their beer’s quality more than makes up for lack of quantity thanks to HAKAmADA’s partner, oHtA mutsumi. A former research engineer for NEC and Pioneer, he knew nothing about brewing, but after passing Next Commons Lab’s selection, he visited over 30 breweries throughout the country and trained at three of them. In Tono, he mainly handles brewing, quality control and recipe development.

Tono Brewing Company enjoys a big advantage in being located so close to the hop fields. “Hops are harvested in August and September,” HAKA- mADA says. “they not only create beer’s distinctive bitterness but also sterilise and stabilise the beer head, and improve preservation. But hops are quick to spoil due to their high water content, so they are normally dried at a processing plant just after the harvest before being shipped everywhere.

Luckily, being close to the hop fields enables us to use freshly picked hops for brewing.” HAKA- mADA’s and oHtA’s brewery has made 25 differ- ent kinds of beer so far, from ales to IPAs and stouts. they also make their facilities available to local hop farmers and residents, and assist them in making beers to their particular requests.

“Our goal is to turn Tono into a tourist destina- tion,” HAKAmADA says. “Hopefully, such projects as our annual Hops Harvest Festival and the Beer Experience tours will help us turn Tono from a hop town to a beer town.”

▶︎PRACTICAL INFORMATION
FROM TOKYO, the easiest way is to take the Tohoku Shinkansen to Shin-Hanamaki (about 3 hours). Once there change to the Kamaishi Line to Tono (about 55 minutes).