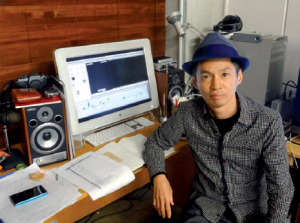 Film director Sogo Ishii is back with a vengeance. He now calls himself Gakuryu, and after being unable to make any feature films for the last ten years, he has decided to start afresh and launch his own production company, whose name – Dragon Mountain – is the English translation of his newly adopted name. The director was kind enough to meet Zoom Japan and talk about his latest film “Isn’t Anyone Alive?”.

“This film was a new challenge for me,” Ishii says, “as earlier films didn’t feature so many characters. Also, it was my first experience adapting a work that had been originally written for the theatre. I found Shiro Maeda’s play very fascinating – all those people who suddenly start dying for no particular reason. If you think about it, the act of dying is a very common fact of life. This story, of course, is also about the end of the world, but I didn’t want to overdo or exaggerate things. It’s very easy to paint such a story in heavy, dark tones. But I decided to treat this huge tragedy matter-of-factly, with a rather light touch”.

Another thing that attracted Ishii to Maeda’s play was the dialogue. “I’ve been teaching at a university for some years now. I like to observe my students, the way they speak and express themselves, and I was surprised by how faithfully Maeda had reproduced their speech patterns. In this respect, the characters’ lines sound exceptionally real, authentic”. In making this film, Ishii was greatly inspired by Spanish director Luis Bunuel’s “The Exterminator Angel”. “I’m a big fan of Bunuel, and I believe you can find his influence in a number of my films. In both stories, for example, there is no real explanation for what happens, and they both have an open ending. I like it when a film doesn’t answer all the questions it poses. Ultimately each viewer has to come up with his or her own answers”. Ishii admits that he does not like a straightforward approach to reality. “I’m not interested in recording these things documentary-style. I want to express them in a creative, original way. I want to have fun while making a film, and I want to make it fun. I like to highlight the strange, unpredictable side of life.

You could say it’s a way to sublimate reality. So what I really mean when I speak about breaking free from reality is not simple escapism, or finding refuge in a fantasy world, but injecting a sense of wonder into a story”. The movie was entirely shot at the Kobe Design University campus where Ishii has been teaching for the last few years, going so far as to cast some of his students. This was their first acting experience, but apparently Ishii was so satisfied that he now plans to use them in future projects as well. “They were very focused and rehearsed a lot in order to deliver their lines naturally. This also allowed them to improvise a little”. Looking for a fresh approach to filmmaking, Ishii even brought his 20-year-old son on board. “My son composed the music,” he says. “Actually he wrote it before I started working on this film, so it wasn’t specifically composed with this story in mind. I happened to listen to it one day, and I really liked it, so I decided to use it. I also liked the fact that most of the people involved in this project were around his age. I enjoyed the energy all these youngsters brought to the story”. Asked to compare today’s youth with the students and rebels he portrayed in his first films, Ishii says they are the same. “The main difference is more a matter of expression. When I was young, we used to be very open and assertive, while today’s youngsters are more introverted. They also appreciate harmony and don’t like to stir things up, while my friends and I were not afraid of controversy. This, of course, doesn’t mean that people today are shallower or don’t have an opinion. Deep inside they have the same problems, dreams and ambitions”. According to Ishii, his film actually only tells half the story. “I had budget limitations, and I didn’t want to end up with a four hour long film. But I hope to be able to make the second part someday in the future”. The budget for this movie was much cheaper than Ishii’s earlier projects, because this time the director invested his own money. “That was the only way I could make it,” he says. “Right now nobody is going to shell out money for films like this. Going independent is the only way”. Ishii has a long history of problems dealing with production companies, beginning with his very first film, “Panic High School”, that was remade for Nikkatsu but ended up looking completely different after he was forced to co-direct it with Yukihiro Sawada. Yet Ishii thinks that things have gotten even worse. “Probably, it is the same everywhere, but in Japan the need to make commercial films that appeal to the masses has become even stronger.
In the past you could sometimes find sponsors and producers who were interested in original ideas. Now it’s nearly impossible. That’s why I did everything myself. I used mostly unknown actors, shot all the scenes at my university and managed to make it cheaply using digital technology. So in a sense you could say I’ve come full circle. When I was a student I used to borrow my university’s materials, and now I’m back making indie films. I can work with a small crew, shooting light, cheaply, and having fun in a way that doesn’t hurt my wallet – even though I know too well my films are never going to be big hits, especially in Japan”.

After many problematic years, Ishii has lately been at peace with himself. “In the past, not being able to make the films I wanted to was very hard psychologically. In 1989, for example, I made “The Master of Shiatsu” as a sort of therapy. At last I’m resuming my work by using new technological and human resources. Now that I’m back I plan to make at least one film a year”.