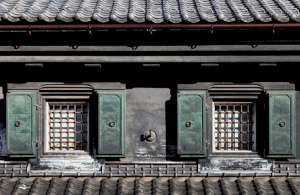 Less than an hour away from the capital, a city situated in the heart of Saitama prefecture will take you back in time 200 years.

It’s a well-known fact that public transport is close to perfect in Japan. So much so that it’s better to catch the train to travel to Kawagoe, in the middle of Saitama prefecture. The city has three stations that welcome thousands of visitors seeking to experience the atmosphere of old Edo (Tokyo’s old name) before the capital became the modern city that we know today.

The architectural heritage of Kawagoe, nicknamed Koedo (little Edo), recalls the buildings that were in vogue in the big neighbouring city in ages past. Just forty kilometres away from the heart of the capital, Kawagoe undertook a lot of trade with Edo, mostly by means of the river. The city was considered an essential strategic area by the shogunate, which made sure several of its powerful vassals were in place there. Kawagoe’s castle, which is now in ruins, was the closest to Edo’s, so it was crucial for those in power to have trusted men stationed there and to transform their city into a top ranking commercial centre. The excavation of the Shingashi River and the creation of canals allowed the merchants to greatly increase commerce with Edo and benefit from an improvement in agricultural productivity.

Kawagoe’s general growth in wealth favoured the development of cultural activities introduced from Edo. Wealth was conspicuous in the Ichibangai district that was then the city centre. It is still quite obvious from the presence of shops and cob walled warehouses (karazukuri), whose most important quality was resistance to fire in order to protect the valuables within. However, this did not prevent the city from experiencing a very fierce fire in 1893 during which many buildings were destroyed. However unlike Tokyo, which experienced a big earthquake in 1923 and the Americans’ fire bombing in 1945, Kawagoe was for the most part saved from the ravages of nature and war. Discovering the buildings on Ichibangai Street is generally the first thing that tourists do when arriving in Kawagoe. The most interesting part is situated between Nakamacho and Fuda no Tsuji. On both sides of the street there are big buildings characterized by their tile roofs, black pebbledash walls and windows whose shutters more resemble doors to a safe rather than ordinary casements.

The first one that you come across when leaving Nakamachi is called Kameya. It was built in 1894, a year after the fire that destroyed the city. Kameya (open 7 days a week between 9.00 am and 6.00 pm) is a shop specializing in pastries. Its own speciality, Kamedora (158 yen), is a small filled bun in the shape of a turtle and is absolutely delicious. Nibbling on one while walking down the street on the lookout for other buildings seems to be a habit amongst the strollers. A little further on and to the left, Tohoyamawa, a pottery shop (open 7 days a week from 10.00 am to 6.00 pm) is quite popular with lovers of photography. Situated on the corner of a little street, its beautiful facade is photographed from every angle. Before reaching this beautiful house, with windows filled with wonderful looking objects, you will spot a Western style three-storey building. This is the Saitama Risona bank, built in reinforced concrete at the beginning of the 20th century. Its size represented the commercial power of the city. A short visit to the Karazukuri museum (9.00 am to 5.00 pm, closed on Mondays, entry 100 yen) on the same street as Tohoyamawa allows one to learn more about building techniques used to create the unique architecture of the area. Visitors are then able to walk down the street on the opposite side for a further 50 meters to discover the Osawa family house (Osawake jutaku) that was built in 1792 by a rich textile merchant. It was spared from the 1893 fire and inspired much of the rebuilding that took place subsequently. Opposite is the Kawagoe Festival Museum (Kawagoe matsuri kaikan), an essential visit to become acquainted with another side of the city: it’s festivals. Every season has it’s own festival, with the spring Koedo Kawagoe Matsuri that takes place between the end of March and mid-May, the summer festival of a Million Lanterns at the end of July which provides a wonderful opportunity to see beautiful illuminated parades in the streets between the Kawagoe and Ichibangai stations, and the autumn Kawagoe festival (Kawagoe matsuri) held on the third weekend of October that is the most popular of them all. Hundreds of thousands of people come to take part in the parades and to soak up a festival atmosphere dating back to the Edo period. It continues traditions passed down from ancient Edo, that now are no longer found elsewhere in the capital.

If you don’t have the chance to go, a visit to the Festival Museum (9.30 am to 6.30 pm, closed on the 2nd and 4th Wednesdays of the month, entry 300 yen) is a must, as you will find examples of the palanquins used in the parade, alongside many audiovisual aids that recreate the festive atmosphere. When leaving the museum you will notice the presence of a 16 metre high wooden tower that dominates the area. This is the Bell of Time (Toki no kane) whose original construction dates back to 1627, although the current building dates from 1893.
The government has classified it as one of the “hundred sound landscapes to be preserved” and you can hear it four times a day (6.00 am, 12.00 pm, 3.00 pm and 6.00 pm). Some people make a little detour to get closer to the bell tower and take pictures, others walk down Ichibangai, turn onto the first street on the right and walk towards Sweetshop Alley (Kashiya Yokocho) that could well have been called Gourmets’ Street. At the beginning of the 20th century, Kawagoe became a great centre for confectionary production. This little street had almost 80 shops whose goods were sent all over the country.

Nowadays there are fewer of them, around ten, that continue to attract visitors drawn to the colours and the nostalgic atmosphere that emanates from the shops. Stop at the Tamariki seika factory (10.00 am to 5.00 pm, closed on Mondays) that was founded in 1914, where sweets are handmade in a setting that is also pleasing to the eye. They are a great idea for a gift.
Kawagoe is not limited to these two streets though. The city has more surprises in store and south of Ichibangai is The Taisho era Street of Romantic Dreams (Taisho roman yume tori), a group of Western style houses built in the 20s. It offers a pleasant change of period, that one can also experience with a visit to the Kita-in Temple, whose history goes back to 830. The temple structures one can see today are not the original ones. After a fire that destroyed most of them in 1638, the temple was partly rebuilt using material from Edo Castle and only the reception hall and the study (the room in which Tokugawa Iemitsu, the shogun who donated these buildings was born), remained. Surrounded by a pretty garden that’s beautiful in autumn, the Kita-in Temple is a lovely place to take a walk. Nearby are the 535 statues of sages (Rakan), some of which date back to 1782. Their expressions are quite surprising and often inspire joy. If you are passing through Kawagoe on the 28th of the month, then you must visit the Narita Temple close by. Every month on that date there is a flea market where you may discover some unique treasures at affordable prices. If you get hungry you can eat in one of the many varied restaurants.

Kawagoe is famous for its sweet potatoes, which are also used to make biscuits. Finally, if there were one particular place to recommend, it would have to be Mio with Wasalo Osawa, that offers koedo black pork products (koedo kurobuta) from pigs bred in the region – a real treat to take away or to eat on the spot.