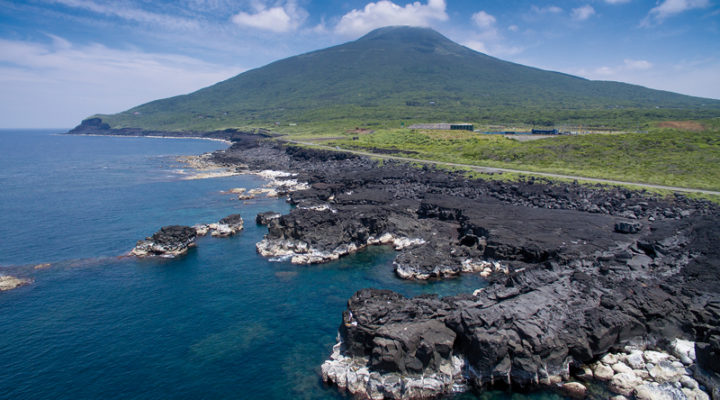 Located to the south of Tokyo, this volcanic island excites the curiosity of visitors with its many cultural and maritime treasures.

All of a sudden, our boat’s whistle sounds. Passengers stand up and hurry to put away their belongings before heading to the stairs to disembark. The long night since leaving Tokyo Bay, during which they were often shaken about, is now all but forgotten. Up on the bridge, beyond the deep blue of the Pacific Ocean, the two volcanoes of Hachijo Island are revealed, the destination of our trip.

Located 300km south of the capital, this volcanic island shaped like the number eight is one of the most prized destinations for tourists. Every year the island welcomes 80,000travellers, who pour in, especially during the summer, to enjoy the blue sea and the fresh fish. The labyrinth of streets lined with hibiscus flowers, the cliffs straight out of a Jurassic Park movie and the waves breaking against the rock, all these different landscapes could make one forget that this island is in fact still administered by the city of Tokyo. You might think yourself abroad if the car registration plates were not marked as registered to the regional district of Shinagawa, one of the capital’s suburbs. The proximity to the metropolis – one hour by plane or one night by boat – and the affordable prices of accommodation, have turned this island into a small paradise for students who often come to spend a weekend before heading back to Tokyo’s concrete jungle.

Out of all the different activities available, sea diving is one of the most popular. The island has fourteen different diving clubs who like to boast that the particular blue hue of the sea here can’t be found anywhere else. “It’s a very dark marine blue,” Ogino Ashiro, the owner of Arabesque Diving Club tells us. According to Ogino it comes from the black seabed made of basalt, that contrasts with the colour of the water and deepens the “Hachijo blue”. The waters are clear down to 50 metres, as the fast current of Kuroshio sweeps away all the sand that would otherwise disturb the water. This current makes Hachijo a maritime hotspot for fish such as different kinds of tuna, sharks, sea turtles and sometimes even whales.

Hachijo’s surrounding sea is not only a haven for divers. In Yaene harbour you’ll often meet fishermen gazing out to sea, fishing rod in hand. With a big smile, one of these fishermen shows us his catch of the day – a large one-metre-long horse mackerel. Cooks from the local inns, familiar with the fishermen, often prepare their catch.

However, the island has many more treasures away from the coast as well.The first of these are the two volcanoes, Hachijo Fuji and Mount Mihara, that look out over the rocky beaches of black basalt. This singular landscape, sculpted by volcano volcanic eruptions, is a reminder that these two volcanoes are still active, with the last eruption dating back to the 17th century. For the moment they seem to be slumbering deeply under a thick cover of luxurious vegetation though. A hiking trek has been arranged to climb up to the summit of Hachijo Fuji (856m), which as it’s name implies, has a similar shape to the more famous Mount Fuji on the mainland. The steep part is short – about 45 minutes – but the slope certainly is very steep. Wild raspberries grow along the mountain path, which small black lizards sometimes run across. The summit is ruled by silence, except for the sound of the wind carrying the clouds up into the sky, and the croaking of frogs rising from the small lake in the centre of the caldera. There is an extraordinary view across the whole island from here, encompassing everything from the airport to the nearby island of Hachijo Kojima, which used to be home to hundreds of people but has been deserted for the past 50 years or so.

After the walk it’s time to go to the onsen (hot natural baths), as Japanese tradition dictates. Since the 1990s this small 70-metre-square island has had seven hot springs open to the public. “Before, only divers were able to enjoy these, as they were only underwater springs,” remembers Shiono Makoto, a local council worker who moved to the island twenty years ago. 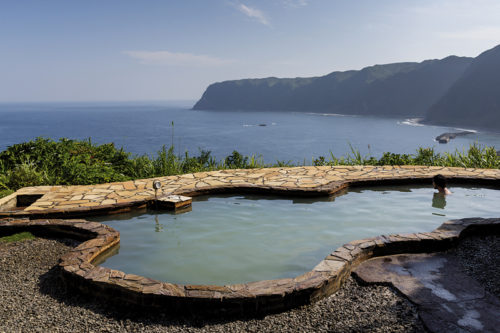 The best known onsen is Miharashi no Yu, nestled at the top of a cliff looking down over the Pacific Ocean. Aside from tourism, the volcanic terrain is also used as a resource to produce electricity. Founded in 1999, the Hachijo geothermal power plant produces 20% of the island’s energy; a great environmental and economic advantage for the community that depends to this day on fuel imported from the mainland. The amount could rise to 70% but the power plant would need to be renovated to achieve this. The volcanic energy is also used to grow flowers, one of the main industries of Hachijo.

Blue sea, hiking and hot baths with superb views; none of this evokes the dark past of Hachijo, an island that was used as a penal colony in the Edo Era (1600-1868) where almost two thousand criminals were sent to carry out their sentences. One can imagine them looking back towards the far-off mainland where they had left their lives and families behind.

Some did try to escape but, “in this natural prison formed of cliffs, the governor back then had to do little to prevent an escape apart from watching the boats,” Tamura Yoshinori, an employee of Hachijo History and Folklore museum, tells us. Even if they managed to get out to sea, the strong Kurishio current, known locally as the “black river”, would prevent their escape. Over three centuries only eleven attempts were recorded, and only one succeeded; that of the prostitute Osakaya Kacho and her lover Kisaburo. They found refuge with Kacho’s parents only to be discovered later and executed by the authorities in 1839. Historical records do not give any more information about their lives, but the memory of their escape has lingered and the names Kacho and Kisaburo are often found in literature.

Time has hardly left any lasting traces of the island’s penal colony past for tourists but the distance separating Hachijo and the mainland remains a fact. In addition to the tropical climate, it’s still one of the principal forces that has shaped the singular culture of Hachijo. Shima-zushi, the “island sushi” that locals eat with mustard is one example of this uniqueness. “First we marinate the fish in soya sauce,” explains 77-year-old Fukuda Eiko who runs the inn at Garden So. The salt in the sauce slows down the fermenting process and the mustard enhances the taste of the fish and the rice seasoned with sugar. So why don’t they use wasabi? “My father tried to grow some on the island, but in the end he gave up. The weather is too warm here,” she adds. This unique dish is a firm favourite with tourists at the local izakaya drinking houses but in the past was an absolute luxury due to the rocky terrain and limited ground-water not providing enough resources to grow rice. “We only prepared rice on special occasions; for traditional festivals and when travelling to Tokyo” Fukuda recalls.

This personal anecdote is a reminder of the history of famines that befell Hachijo several times up until the 19th century. Far from anywhere, those who lived on the island had no means to withstand a difficult season.

The situation for an isolated island such as this still remains much the same today, as demonstrated by it’s level of dependence on the state and on the government in Tokyo. About 60% of the local budget is provided directly by these two authorities. To escape this situation the inhabitants have often turned to tourism, starting in the 1960s and 1970s when it seemed to be working well.

Back then, travel agencies would promote Hachijo as “Japan’s Hawaii”. It was a slogan that resonated at the time, as foreign travel was strictly controlled and remained a dream for many. Luxurious hotels were built one after the other, hoping not to miss out on the golden opportunity. However, ambitions for continued property development were soon thwarted.

In the mid 1960s the government lifted restrictions on travel abroad. Now the door was open and the slogan “Japan’s Hawaii” lost its appeal as people could now travel to the real Hawaii if they so pleased. The last obstacle, the high price of the dollar, disappeared definitively after the Plaza Accord in 1985 and there was nothing left to attract tourists to Hachijo. The local hotels, often oversized, lost their customers in droves and had to close their doors.

The Oriental Hotel Resort, located close to the airport, is a symbol of this period of decline. Opening for business at the end of 1970, this former beacon for Hachijo, equipped with a swimming pool and even a theatre, was abandoned – as demolition was too costly – in around 2006. Subjected to sea wind erosion and overwhelmed by tropical vegetation that now covers nearly half of the complex, the imposing skeleton of the Oriental Hotel Resort now only welcomes a few visitors curious to see its ruins.

Times change though. For the past few years, the number of foreign tourists visiting Japan has skyrocketed and hosting the 2020 Olympic Games in Tokyo should reinforce this trend. The local authorities in Hachijo have no intention on missing out on this opportunity, and have started to make plans to renovate the infrastructure that was originally intended for Japanese tourists.

No17 [Travel] The tale of Edo and Tokyo

1 Comment on No43 [Travel] Hachijo, Pearl of the Pacific