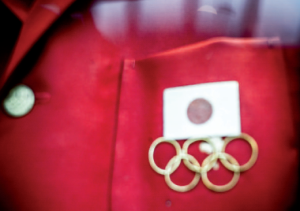 On September the 7th, the International Olympic Committee meets to decide which city will host the 2020 Games and Tokyo is in with a chance of winning.

When this issue of Zoom Japan goes to print, the International Olympic Committee (IOC) will not yet have met in Buenos Aires, Argentina, to elect the city that will welcome the 32nd modern era Olympiad, better known as the 2020 summer Olympic Games. On September the 7th, the IOC will decide between three candidates: Istanbul, Madrid and Tokyo. The representatives of these three cities defended their proposals one last time in front of the Evaluation Commission in Lausanne, Switzerland, at the end of June. After this last presentation, the Japanese delegation led by Tokyo governor Inose Naoki and supported by finance minister and 1976 Olympic pistol champion Aso Taro, was very optimistic about carrying off the Holy Grail. Nevertheless, the final choice is always complicated and many considerations have to be taken into account. So in anticipation of the IOC members’ vote, we want to recall the 1964 Olympic Games that took place in the Japanese capital just under 50 years ago. At that time, the committee’s decision to award the games to Tokyo allowed a new page to be turned in Japan’s reconstruction after the end of the Second World War. The city opened a new chapter in its history. No doubt, designating Tokyo as the host of the 2020 Olympic Games would be another strong signal as the country painstakingly moves out of twenty years of crisis. It would be a wonderful opportunity for change… 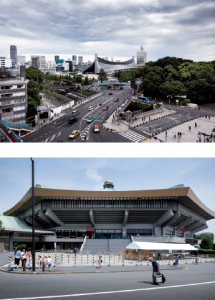 [Walk] The renaissance of a capital

When Tokyo hosted the Olympic Games in 1964, many of its districts changed. We look at what is left of that period.

For many countries, being awarded the Olympic Games is not only a source of national pride but also an event of great significance which transcends sports and helps kick start a new historical phase. In this respect, few have been more important for the host country than the summer games that took place in Tokyo in 1964. As one of the defeated countries in World War II, Japan had become a pariah among the international community and had been occupied by the allied powers until 1952. During that period a sense of futility and resignation had prevailed among the people, whose favourite expression had become “shikata ga nai” (it can’t be helped). The Olympic Games thus became the final act of a rebuilding program that was, amazingly, accomplished in just 20 years and primarily revolved around a gradual transformation of the capital itself. As this was the first Olympiad to be hosted in a nonwhite, non-Western country, the Japanese Olympic Committee did everything in its power to show Tokyo at its best, even appealing to the state for financial help, despite Olympic regulations stipulating that the Games were to be organized by cities and not by national governments. Their joint commitment resulted in total expenditures that surpassed all previous Games. A sprawling Olympic Village emerged in Yoyogi and national broadcaster NHK built a new media centre nearby.

The two venues which make up the National Gymnasium – both of them designed by architect Tange Kenzo – still stand today as outstanding examples of a symbolic approach to urban architecture, aimed at mixing tradition and modernism. These two buildings – clearly inspired by oriental models – are connected by a road link to the Meiji Shrine dedicated to the first emperor of modern Japan. The government even took advantage of the Games to plant 20,000 trees in the streets and parks of Tokyo. In doing this they tried to replicate prewar and wartime landscapes that had been damaged by the U.S. air raids. For example, many of the keyaki trees that today grace Omotesando Avenue remind us of the area as it looked in 1919 when the Meiji Shrine was built. As many foreign visitors were expected, Haneda International Airport was modernized in order to accommodate the new jet airliners and it was connected to the city centre by a state-of-the-art monorail. Many train and subway lines were completed, among them the Shinkansen or Bullet Train, that began service nine days before the opening ceremony, connecting the country’s two main cities of Tokyo and Osaka in just three hours. Roads were widened or even newly built, both in the city and the suburbs, with the giant Metropolitan Expressway crisscrossing the metropolitan area in order to improve traffic throughout the region. At the time it looked so futuristic that even movie director Andrej Tarkovskij included an extensive shot of the expressway in his 1972 science fiction picture “Solaris”. All these roads were supposed to make space for the kei kaa (light cars) that were being developed to promote popular motoring. In order to build the Metropolitan Expressway, a number of rivers and canals were filled up while in other areas the Expressway was just built over the river itself – a plan the government adopted so it didn’t have to acquire new land. One famous victim of this programme was Nihonbashi, the bridge in the centre of Tokyo from which all highway distances are traditionally measured.

The expressway, just hovering over it, has completely ruined its classic urban landscape and now more and more people are trying to get the area restored to its former beauty by changing the expressway’s route. Among Tokyo’s districts, Shinjuku was probably the one that changed the most. The WWII air raids had turned the area into a dull, gloomy place but its revitalization programme was bolstered by a series of architectural projects. A shopping mall – later called My City – was built on top of the station. As a consequence, young people began to gather in the plaza in front of the station. Popular bookstore Kinokuniya moved to a new nine-story building designed by famous architect Maekawa Kunio. The building still faces Shinjuku Street, an elevator leading up to the second floor where one finds a music corner. At the time much of Japan was, like the United States and Europe, in the midst of a cultural revolution and the local youth would gather here to listen to the latest songs from the Beatles, the Rolling Stones and Bob Dylan. A few years later this revolution would turn into explosive student protests and Shinjuku Station became a protest hot spot. In 1968 for instance, nearly 300,000 people would take part in International Anti-War Day, forcing the trains to stop, while one year later antiwar demonstrators – the so-called “folk guerrillas” – would attract thousands of people to the west exit underground plaza (converted for the occasion into a “liberated zone”) where they spent the night singing.

If East Shinjuku was a hotbed of cultural activity, its western side was a completely different story. While the area immediately next to the station underwent substantial renovation (Keio Department Store opened in 1964, joining the Odakyu Dept. Store that had been completed two years before), people only had to walk a short distance to find themselves in the middle of nowhere. The huge water purification plant which had occupied most of the area was moved to another location, leaving a vast wilderness that had still not been filled by 1964. In Ichikawa Kon’s famous documentary “Tokyo Olympiad” one can see the marathon runners passing on Koshu Kaido (one of the five main routes linking Tokyo to the rest of the country) just south of Shinjuku Station. Around them there is only the blue sky and a few low buildings. In comparison to Shinjuku, such districts as Shibuya and Roppongi still looked very different from their currently world-famous cityscapes. In Shibuya the most notable addition was the elevated expressway that even today crosses the tracks south of the station. As for Roppongi, a hypothetical time traveller would have a hard time recognizing the future glitzy nightlife capital of Japan. The overall feeling was that of a largely undeveloped area whose dusty, unevenly paved streets made their way between a handfull of buildings. In the central district of Yurakucho the thriving postwar black market had evolved into Sushiya Yokocho, an alley on the east side of the station whose tiny bars and sushi stalls were the meeting point for the many journalists who worked in the area. However, after construction began on the Kotsu Kaikan Building the area was gradually cleaned up until the last bar was torn down in 1968. Many other districts became construction sites, but most people didn’t mind the noise and inconvenience as this was mainly seen as a sign of progress while Tokyo slowly turned into a modern metropolis. Tokyo is often compared to a living organism, endlessly changing its look and structure, but even though today’s Tokyo is far different from what it was in 1964 in so many respects, there is no doubt that the prototype of the modern city to come was created 50 years ago.