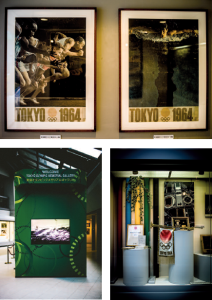 Little known to foreign visitors, and even to the Japanese themselves, the Tokyo Olympic Memorial Gallery is an original and interesting place where many souvenirs are gathered from the Olympic Games that took place in the Japanese capital between the 10th and the 24th of October 1964. It is situated in the Komazawa Olympic Park, just a 10-minute walk from Komazawa Daigaku station (Tokyu Den-en-toshi line), and is accessible for free between 9.30 am and 5 pm (closed the 1st and 3rd Monday of every month). The gallery is a good way of finding out about and experiencing the Olympic spirit that ruled at that time. 1-1 Komazawakoen, Setagaya, Tokyo 154-0013 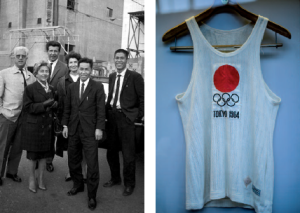 In the summer of 1964 I had just returned to Japan after having spent three years as a music student in Paris and I could not have imagined that the whole country was reaching boiling point in anticipation of the Tokyo Olympic Games. Children, elderly people, everybody was talking about the Tokyo Olympics. Tokyo itself was disfigured and unrecognisable, covered with bulldozers and scaffolding. Everything needed to be renovated! Far from being a discouragement to the population, the preparation gave people the feeling they were witnessing the biggest event since the Second World War. In the centre of the capital, we built an expressway that snaked around the city above the main streets, as well as many sports stadiums. The honour of our country was at stake and Japanese architects worked very hard on this big project. I was thrown into in this euphoric atmosphere as soon as I arrived and I was even more surprised when the bureau of international interpreters contacted me to work for the president and the vice-president of the International Volleyball Federation (IVBF) and their wives. All four of them were French. However, the French female volleyball team wasn’t present, so I didn’t understand what was going on. I found out that the president was to give an important press conference: should the International Olympic Committee allow the North Korean female volleyball team to participate when South Korea was threatening to stay home if Pyongyang was represented? According to my boss, nobody could predict the IVBF president’s reaction before he set foot in Tokyo. I waited for the French delegation’s arrival at the entrance of the Grand Imperial Hotel with the mayor of Tokyo, Azuma Ryotaro.

When Mr Azuma announced that the press conference would take place fortyeight hours later, the president had simply said that he needed to be updated with last minute information. When the day finally came, I hadn’t been able to prepare. The room was filled with journalists from around the world. The Japanese press was in the front row and I was even more scared than I had been for my first singing competition! I translated without understanding what was going on, and I was heavyhanded enough to ask the audience if they understood what it was all about. I was booed like never before and one of the journalists stood up and said: “all you need to do is translate. We don’t ask you to understand!” I literally fell apart. The president slowly repeated his press release again and I translated but remember nothing about it, except that after the press conference North Korea decided on its own behalf not to attend the Olympic Games – to the great relief of all the participants. A few days later there was a reception at the Imperial Hotel and two or three journalists came to find me to cheer me up and tell me that they weren’t all as mean as their colleagues! The opening day finally came and I was lucky enough to attend with the French delegation. The Jingu stadium, situated in the heart of Tokyo, was chock-ablock. Locals invaded all the television shops to watch the event as very few people then had televisions at home. It was a beautiful autumn day. Nobody cared about working – all we cared about was the ceremony. The sports champions entered the stadium to the sound of brass bands. We clapped our hands, wideeyed every time we heard the name of a country completely unknown to us. When the Emperor made his speech in perfect old Japanese, the crowd screamed with joy as thousands of white doves flew off above our heads. How exciting to see so many people from around the world on our soil! We were finally at the centre of the world’s attention after the misery of a lost war… Japan had amazingly succeeded in organizing everything in record time and was able to show off their sporting talents as well. Among them was the female volleyball team called Toyo no Majo, the Oriental Magicians. They had invented a way of rolling on the ground to touch the ball with unequalled speed and flexibility.

Their victory was a very powerful moment! But even more remarkable is the enthusiasm that Japanese still have nowadays for sports champions from around the world. Many times we have talked about “our champions” such as the Czech gymnast Vera Caslavsca, or the Ethiopian barefoot marathon runner Abebe Bikila! For the closing ceremony, the champions danced wildly and sung and hugged everybody while waving to the prince. All the spectators laughed until they cried! To see all those happy foreigners was so moving. That was our great reward. Now we are waiting for the IOC’s decision to know whether Tokyo will be chosen to welcome the 2020 Olympic Games. These games would give us the opportunity to thank the whole world for supporting us when the Fukushima disaster and earthquake took place in northeast Japan. Nevertheless, when I think back to the pure joy that prevailed in 1964, I fear that today’s population may not be worthy of such an event. They have become too bitter, disappointed with the politics of recent years. Times have changed… But if we do get picked, I sincerely hope that the political conflicts that currently put us in opposition to our Chinese and Korean neighbours will have no influence on the quality of our welcome. We need to do all we can to re-establish friendship with our Asian neighbours who taught us so much over the years. That is what the Olympic Games should mean.