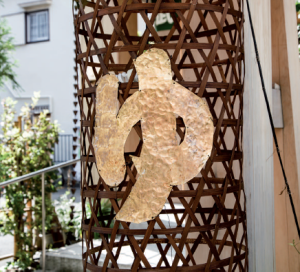 Washing and relaxing in very hot water is a ritual deeply embedded in Japanese life.

It’s time to scrub each other’s backs. Whether CEO, beggar, monk or yakuza, elderly or young, everyone is equal in the bath – just bodies asking to be washed. There is no difference between us when naked. Everyone feels the other’s soul. Everyone takes care with the other. It’s not about schooling or laws. School is for knowledge only. It doesn’t teach us about life. Law is for common sense. It doesn’t teach us about life. That is why the bath is the best place to learn about life. It is the best place to go for this in Japan.”. So sings a customer in a public bath (sento) in Sugimori Hidenori’s film Mizu no onna (2002) that takes place in these traditional Japanese institutions. Bathing is deeply rooted in daily life in Japan. The origins of the bathing culture are still unclear, but we know it to be very ancient because “The History of the Kingdom of Wei”, a Chinese text dating back to 297 AD, includes a description of the Japanese bathing ritual that was probably imported from China and related to religion. Bathing was a way of purifying after having been in contact with death. In later documents there are many references to bathing as well as archeological traces of bathhouses and their paraphernalia. Iwaburo (stone bath) and kamaburo (cauldron) are two of the most ancient kinds of bath identified in the archipelago but were more like steam baths than those used nowadays.

The first ones were introduced during the 11th century and the word sento was first used in 1401. It is the combination of two Chinese characters that mean “money” (sen) and “hot water” (to, also pronounced as yu). Sento is the most common word to designate this type of bath house that multiplied during the 16th century. The rapid urbanisation of the archipelago, its consequences on public hygiene and the strict fire regulations contributed to the development of public baths under the control of local authorities. The first sento was built in 1591 in Edo, later to become Tokyo. At that time, the baths familiar to people today were yet to emerge and the early sento featured facilities called todanaburo – bathing cabins – in which there was a bath heated from the ground. Later the sliding doors through which the heat escaped were replaced and zakuroguchi were created in order to keep the water warm. Zakuroguchi is a space in which heat is captured by wooden planks at the entrance to the bath, so that the customers need to bend over to get in. This solution insured the bath’s temperature was regulated but was inconvenient because it blocked out the light completely and hid some bad surprises, such as waste or floating dead bodies. It was only during the 19th century that this system was abandoned for buildings that were better lit and equipped with better drains, giving birth to the sento we are still familiar with today. Regular bath houses are made up of three distinct zones (the changing room and toilet, the washing room and the bath) and they progressively became convivial neighborhood hubs in which Japanese would meet their neighbours, friends, or work colleagues to share a rare moment of intimacy. In certain agricultural regions neighbours would share a bath during which they would determine when the harvesting should be done. However, the popularity of public baths have declined since the sixties, with the development of individual bathrooms in apartments. Bathing is still an important part of the day but it doesn’t have the same social role anymore. Over the past two decades in Japan there has been a rise in tourists visiting spas (particularly those with hot springs), which gives everyone the opportunity to experience the atmosphere that used to fill neighborhood sento across the land. Even so, it is lamented in Mizu no onna that, “the disappearance of public baths signifies the disappearance of the spirit of chivalry. It also means less compassion for others. And without compassion, there is no public bath”. This decline of the sento represents a real upheaval that mirrors the profound changes in Japanese society since the Second World War.