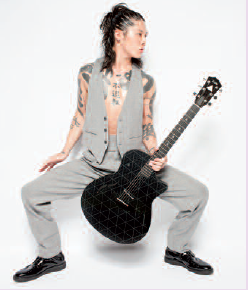 Miyavi is an unclassifiable musician who started his career in Visual Kei, a style which he then progressively moved away from. He is back in Europe for a series of long awaited concerts and will be in London, at the Shepherd’s Bush Empire, on the 15th of March at 7pm to perform some of the songs from his latest album, Miyavi, due to be released on the 3rd of March. He describes himself as a samurai guitarist and particularly likes European audiences and the interest they take in foreign artists. “They are far more open than American audiences. I feel we have a lot more in common,” he told Zoom Japan. He is particularly moved by the recognition accorded to him in Europe, which is why 11 dates have been organized for this tour. Yet surprisingly he chose to move to Los Angeles, where he will start his acting career alongside Angelina Jolie in Unbroken, a film to be released at the end of 2014.