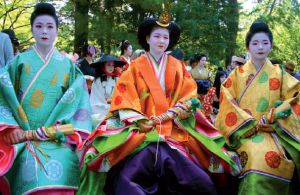 The young lady sitting on the bench straightens her wig and applies the finishing touches to her make-up. Her face is painted porcelain-white; her lips are bloodred and heart-shaped but her expression hints at a secret sadness. She is wearing multiple kimono, one on top of the other and must be boiling – it’s only 10.30 but already it feels like a stifling thirty degrees.

To her right, a samurai warrior takes off his helmet, sits down and tucks into a multi-coloured bento lunch-box comprising twelve colourful compartments. From time to time his horse whinnies with impatience. All around there are benches laden with swords, quivers full of arrows, helmets, animal skins, rope sandals… It looks like the set of some lavish Hollywood historical drama. But this is not California. These are the vast gardens of the Imperial Palace in the ancient city of Kyoto, where people are gearing up for the Jidai Matsuri, or Festival of the Ages. Along with the Gion Matsuri and the Aoi Matsuri it is one of Kyoto’s three most important events of the year. The Jidai Matsuri was first held in 1895 to commemorate the completion of the magnificent Heian Shrine. The date was October 22nd – the 1100th anniversary of the day when Emperor Kammu first entered Kyoto in 794 and established it as the capital of Japan, back when Kyoto was still known as Heian-kyo – Capital of Peace and Tranquility. The shrine was built to worship the deified spirits of both Emperor Kammu, Kyoto’s first Emperor (who reigned from 781-806) and Emperor Komei (reigning from 1846-67), the last emperor to sit on the throne in Kyoto before the capital was relocated to Tokyo in 1868 at the start of the Meiji Restoration. “The people in Kyoto felt sad about the removal of the Emperor at that time,” says journalist and Kyoto resident Nakata Masahiro. “This was a nostalgic moment for them.”. So, aside from commemorating the building of the Heian Shrine, the Jidai Matsuri was also conceived as a morale-booster to raise the spirits of the people, still dejected after having their capital city status and Imperial Court taken away. The festival thus became a celebration of Kyoto’s glorious heritage, with participants in the parade dressed in sumptuous costumes representing the evolving historical periods of the city’s eleven-hundred-year reign as Japan’s capital, from 794 to 1868.

Back in 1895, the Jidai Matsuri started as a modest event with just six sections, but it has grown in size and popularity with both residents and visitors alike. Today, there are around twenty sections and over two thousand participants, forming a two-kilometre procession which wends its way along a 4.5 km route from the Kyoto Gojo, or Imperial Palace, to the Heian Shrine. It starts at noon and doesn’t arrive at the Heian Shrine until around 2.30 pm. Every year over 150,000 people come to watch. Such is the festival’s international popularity that on the 25th of July 1998 a mini Jidai-Matsuri was held in Paris to celebrate the 40th anniversary of it becoming Kyoto’s sister city. It began at the Arc de Triomphe and passed the Place de La Concorde and the Louvre. Some 400 Kyoto residents together with 250 Japanese residents of France and local French participants combined to bring the magical splendor of ancient Kyoto to the streets of Paris, watched by an estimated 200,000 spectators. Meanwhile, back in the grounds of Kyoto’s Imperial Palace (the Emperor’s former residence), men, women and children dressed in an eye-popping kaleidoscope of costumes are getting ready for the parade under the welcome shade cast by the towering ancient pine trees. Their silk robes glisten in the morning sunshine. Some are making final adjustments to these elaborate garments while others relax and sip green tea on the low benches set up in the grounds. All around there is a profusion of carts, carriages, large wooden chests and even a couple of oxen. A swarm of photographers bobs and weaves among this multi-coloured multitude, cameras clicking. Yet the participants respond with unfailing good cheer, no matter how many times they are called on to face this way or that. They are like actors on the red carpet and just like actors they never break character. When asked for a picture they don’t smile and flash the peace sign, as many Japanese tend to do, but pose with all the dignity and bearing of their social rank. Participants practise wearing their costumes for weeks before the festival but they can only be worn in public on the day of parade. With noon approaching, the park begins to fill up with people hoping for a prime viewing spot. Many are already seated on blue tarpaulins on both sides of the wide gravel driveway. For 2000 yen you can purchase a ticket for a seat on one of the raised viewing platforms, an ideal way to enjoy the parade.

Finally, the procession gets underway. It emerges slowly from the grounds of the palace and out into the streets of Kyoto. It is only now that one begins to appreciate the stunning scope of the event. It is divided into sections representing each historical period, starting with the Meiji Era (1868-1912) and ending with the Heian Era (794-1185). The whole procession takes an hour and a half to pass by. Every imaginable rank and office from 1,000 years of Japanese society is represented here: from emperors and their consorts, courtiers, nobles, commanders and samurai warriors to flower-sellers, foot-soldiers and servants. There are artists, armies, oxcarts, palanquins, archers and over seventy horses, which trot past with dressage-like elegance. The astonishing accuracy of each period’s costumes beggars belief. Clothes, footwear and hairstyles have all been faithfully reproduced in painstaking detail. Even the dyeing of the costumes is done in the traditional way. Everyday objects and military weapons, like the long-handled samurai swords or Meiji Era rifles, are equally authentic. Yet the Jidai Matsuri is far more than a parade of historical garments. Beyond the gorgeous costumes and authentic artifacts, the procession also displays a touchingly human face thanks to the inclusion of real-life historical characters from each era. These range from the two renowned female authors of the Heian Era (794-1185), Murasaki Shikibu (Tale of Genji) and Sei Shonagon (The Pillow Book), to the great 16th century lord and warrior Toyotomi Hideyoshi.

And what of the sad-faced young lady, the one who was putting on her make-up and wearing multiple kimono at the start of this article? She turns out to be Kazu-no-Miya, poet princess and half-sister of Emperor Komei, one of the two Emperors honoured in the Heian Shrine. Her tale is one of the most poignant in all the parade. At the age of sixteen her engagement to childhood friend Prince Arisugawa Taruhito was broken off, and she was forced to marry shogun Tokugawa Iemochi in an attempt to unite the Imperial Court and the Shogun government in the rapidly changing Japan of the Meiji Restoration era. Despite her young age, Kazu-no-Miya initially refused the arranged marriage and only acquiesced after insisting on certain conditions. In Kathryn Lasky’s novel about Kazu-no-Mya, Prisoner of Heaven, the princess declares: “No matter how they cut me up to serve their purposes, within me there shall always remain a little spark, a small piece that is my essence and cannot be destroyed.”.
And it is Kazu-no-Miya’s half-brother, Emperor Komei, together with Emperor Kammu – the last and the first emperors to reside in Kyoto – who bring the Jidai Matsuri to an emotive conclusion, when two mikoshi (portable shrines) containing their spirits are paraded through the streets. Yet for all its pomp this is very much a people’s festival. It is said that if you ask one Kyoto University student to volunteer to help with the preparations, one hundred will immediately offer their services. As a result, even after over a hundred years since it ceased to be Japan’s capital, the world can still marvel at Kyoto’s proud history and heritage in this magnificent pageant that captures the soul of the city.