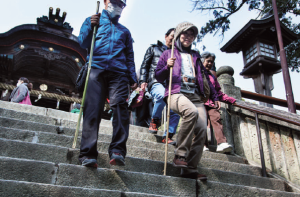 Shikoku is one of the archipelago’s most attractive regions but many foreign tourists are not aware of this. However, many of the little islands of the Inland Sea, such as Naoshima or Teshima have gradually been transformed into centres to promote contemporary art. Thanks in no small part to these centres, the region’s tourist trade is increasing, but the local authorities would like to draw attention to the other attractions on offer. The region has amazingly diverse landscapes, its own gastronomy and a first class cultural and religious heritage, which all deserve to be better known.

Takamatsu, the main arrival point in the region, is accessible by train from Tokyo or Osaka, but those in a hurry can get the shinkansen to Okayama and change to the Marine Liner that will take them directly to the main city of Kagawa prefecture. For those who are travelling from Tokyo, there is the Sunrise Express Seto, a night train whose design and comfort is worth experiencing. It runs every day, departing from Tokyo Station at 10pm and arriving in Takamatsu at 7.27 am. Just a hundred metres from the main station, the remains of a castle stand alongside another station through which runs a railway line owned by Kotoden, a small local railroad company. It was established at the beginning of the century and operates three little lines, the most famous of which runs to Kotohira, a city of 10,000 people, known by everyone in Japan for Konpira-san, a religious sanctuary built on top of a steep hill. The 47-minute journey between Takamatsu and this hilltop Shinto site is often undertaken on everyday modern trains, but from time to time the short trip will take a completely unexpected turn when the company decides to take its old carriages out for a ride. These 1920’s beauties are unveiled once a month to transport you back in time to the dawn of tourism in Japan.

Kotohira is a top priority destination. It has the charm of a small city, with many hidden secrets to discover. The main attraction is the sanctuary on top of Mount Zozu, which you reach by climbing its 786 steps. 786 also reads as “na-ya-mu” in Japanese, meaning “to be tormented”, so a descending step was altered to bring the number down to 785 and avoid bad luck from the superstition. This is a detail of great importance for Konpira-san, because it is first and foremost a place meant to bring relief and joy to those who come to pray. All the way up there are signs to remind everyone that the more we smile, the longer we live. It is hard not to be in a good mood when undertaking the ascent to Konpira-san. That is not difficult however, as on both sides of the ascent are shops and restaurants offering local delicacies. On the doorstep of the Toraya Soba restaurant is an old lady who speaks to those passing by and invites them in to see her shop that was the set for one of the films in the famous “Otoko wa tsurai yo” (It’s Tough Being a Man) series by Yamada Yoji.
She wears a long purple shirt and a friendly smile as she sets the tone for the walk towards the summit, perfectly embodying the local people’s warm welcome. The sanctuary is open all year around but it is particularly beautiful in springtime when the dozens of cherry trees on either side of the path are in bloom. The walk is quite easy until the 100th step by the Ichinosaka-torii gate that is flanked by two Bizen style pottery lions. One of them has a ball under its paw as a reminder of kemari, a popular ball game that was played here during the Heian period (794-1185). The public can take part in three games a year (on the 5th of May, 7th of July and around the 25th of December) in the Shoin garden, the reception pavilion to which visits are highly recommended (between 8.30am and 5pm, 800 yen). It contains seven rooms with remarkable fusama screen doors painted by Maruyama Okyo (1733-1795). His renditions of tigers and Mount Fuji will leave you speechless.

From there, you can walk to Asahi no yashiro, a shrine dedicated to the sun goddess Amaterasu. The building is so beautiful that most visitors think they have reached the final destination of the visit. The fine sculptures herald the discovery of yet more treasures if you decide to take the right-hand side staircase that leads to the main building (hongu) and the emado, where models of boats and offerings to the deity are displayed. These are reminders that the sanctuary is dedicated to the god Omono-nushi, protector of sailors and fishermen. A little lower down is a huge propeller that was donated by shipbuilding firm Imabari Zosen, demonstrating how original some of the donations are. As in other sanctuaries, there are very many people who bring donations and as tradition dictates, their names appear on the tablets alongside the path, except at one spot where the name is replaced with “anonymous” for a very generous donation from someone who didn’t want his name to be made public – an event rare enough to be highlighted. Money is always near at hand in Konpira-san, as the first character of its name, meaning “gold”, signifies. The sanctuary’s symbolic colour is golden yellow, which decorates both the amulets (mamori) available to visitors and the carriages of Kotoden’s modern trains.
After having walked up the additional 583 steps to the Inner Sanctuary (okusha), it is time to leave Mount Zozu for other sites in Kotohira. A little break at one of the many restaurants at the foot of the hill is a good idea before taking off to Kanamaru- za, the Kabuki theatre built in 1835 and the oldest in the archipelago. It is open from 9am to 5pm (500 yen) and is approximately 500 metres away from the alley that leads to Konpira-san. The theatre itself is still in use, and welcomes the most famous actors of this theatrical genre in which all the parts are taken by men. Performances take place in the spring but the building is open to visits all year around. The hatchways through which the actors appear and disappear can be viewed, as well as the mobile stage, the backstage area and the bathroom with its wooden bath. It is a beautiful building and gives a clear idea of the way the Japanese entertained themselves during the Edo era, at a time when many already came to pray at Konpira-san. Nowadays, Kotohira receives approximately 4 million visitors a year. Despite this success, the local people are not complacent and continue to welcome their visitors with a smile. That’s probably why they live so long, with everybody living by Konpira-san’s maxim that connects longevity with happiness.