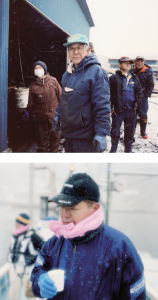 The Tohoku region is not only famous for its sake; the excellence of its fishing is also well proven.

The areas hit by the tsunami are also known for the excellence of their fishing. “Our sake goes well with our fish! They are inseparable!” is what you often hear in the sake breweries. According to Tohoku natives the local fish, fishermen, and sake form a trinity that is impossible to separate. In the region’s restaurants the chefs never forget to serve fish with the local alcohol. It blends harmoniously with fresh fish; the perfect alchemy. The fishermen themselves consider sake to be indispensable. The tsunami washed away most of their boats but when they launch a new boat, they organize a Nyushui-shiki ceremony during which they bring sake aboard their new vessel. Then they share it to strengthen the ties that bind the crew of the new vessel together. “It is a local tradition. Every time we have something to celebrate, we share some sake and sprinkle some over the boat,” says 57 year old Sato Takehiko from Rikuzentakata in Iwate Prefecture. Last September, he bought a new fishing boat that he named Dai-hachi Yamatomaru. His fishermen friends brought him some Suisen for the occasion, local sake with the same name as his boat. Apart from ceremonies and celebrations, sake is also a good friend to the fishermen, who always have some on aboard. After a hard day at work, they drink while eating some of their catch. “Fish and sake are all one here,” they say. The growing popularity of sake from Tohoku brings with it the promise of a bright future for the local industry. The government has decided to give the region’s fishermen new, more modern refrigeration to replace what was destroyed by the tsunami. The older equipment limited the distribution of the fish but the new plant will improve it considerably, allowing the fish to be transported throughout the archipelago as well as abroad. Both in Japan and overseas, Tohoku’s sake is growing in popularity. The fishermen want to take advantage of this enthusiasm to strengthen their relations with this local partner in order to conquer the world. Step by step, the idea is gaining ground.