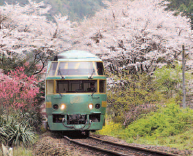 With an exterior that is curvaceous and rounded. This is a train that you immediately want to climb aboard when you see it. It serves two completely different spa towns and the first, Yufuin, gave its name to this green train. It’s a lovely little town to wander around. You will soon find yourself in the countryside, among rice fields, and on the way will pass many ashiyu (hot water foot-baths). The first one is on the platform at the station, near the main exit, but there are many elsewhere too, and they are free to use. Towel dispensers (200 yen) are provided if you have nothing to dry your feet with. The second city this charming train takes you to is Beppu, a symbol of the hot-spring resort industry in the archipelago. You know when you are getting near – there is a strong smell of sulphur in the air. JR East The train takes no notice, but calmly transports you to your destination. It’s up to you which of these charming spa towns you like best, however, we prefer Yufuin. It has many hot baths, such as the Musoen, just 20 minutes away from the station, with its beautiful outdoor bath and an incomparable view of the mountain. There are many others as well…

In an attempt to support tourism in the regions that suffered damage after the events of 2011, JR East launched this restaurant train that runs between Hachinohe and Kuji in the northeast of the archipelago in the spring of 2014. Like the Orenji Shokudo on Kyushu Island, the aim is both to highlight the beautiful landscape along the Pacific coast and to promote culinary know-how. The carriages are equipped to allow all travellers a view of the landscape while eating high quality food. On the way out (departure at 11.05 am), lunch is served until arrival in Kuji (12.52 pm). During the return (departure at 2.20 pm), the dessert buffet is open all the way to Hachinohe (4.05 pm). This train runs at weekends and on public holidays. To enjoy the luxury of this journey you can expect to pay 11,300 yen for a return ticket, and are advised to make a reservation as soon as possible as tickets sell like hot cakes. You can take the trip several times, because the menu changes every three months, according to the seasons. The food is served in dishes crafted in the region. All of this contributes towards helping the region’s population that suffered so much after the disaster on the 11th of March 2011. As the name suggests, the train takes its travellers on an emotional trip, for both them and the locals who are happy to welcome back the tourists.

On the 12th of April 2014, just a week after the Sanriku Tetsudo Railway Company brought its Kita Riasu and Minami Riasu lines back into service in the coastal areas that were most affected by the tsunami of March 2011, JR East launched this special train service directly inspired by the world of Miyazawa Kenji and his essay “Night on the Galactic Railroad” (One Peace Books, trans.). The company, which needs to make amends for its unforgivable delay in re-opening some of the damaged lines, has nevertheless succeeded in creating an extraordinary train that travels 90.2 km between Hanamaki and Kamaishi (4 hrs 30 mins), with a 70 minute stop in Tono. The latter is famous because it is said to be home to kappa, mischievous imp-like creatures always up to no good. The retro atmosphere takes us back to the 20s, and sucks us into the famous Japanese author’s universe. The exteriors of the carriages are decorated in blue and gold and contrast wonderfully with the green or snowy landscape they travel through, depending on the season. If you want to be part of this experience while being pulled along by a C58 239, you had better make a reservation for one of the 176 seats. It runs mainly at weekends and on public holidays, and already enjoys a great deal of popularity.

This liner has only been in service since May 2014, but it already has a lot to offer. Looking at the name, “shu” means sake, the asterisk represents the Chinese character for rice but also resembles a snowflake and a “kura” is a warehouse or sake brewery. The journey is an invitation to discover the specialities of this rice-growing region between Takada and Tokamachi (Iiyama Line). While sipping one of the region’s best sakes, the travellers are able to enjoy a beautiful view over the Sea of Japan to the sound of some live jazz. They travel through Oumigawa, the railway station nearest to the coast, and can enjoy the delicious local cuisine served on board. All of the stations where the train stops have renovated their platforms to offer their passengers a delightful welcome. A return trip costs 13,600 yen.