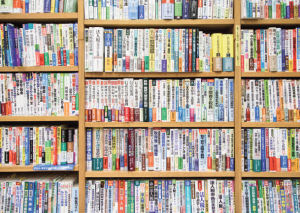 Just as in other parts of the world, Japan is going through a paper related crisis. Nowadays the Japanese spend more time tapping on their cell phones and tablets than reading, but just a few years ago you could determine trends from what people were reading on the train on their way to and from work, whether books or magazines. Now they prefer television, texting or emailing rather than turning the good old pages of a book. Even the manga sector is going through a rough period with fewer sales than in the 90s, when they broke all records, and it is quite understandable that publishers are dejected and that bookshop owners are experiencing difficult times. Small local bookshops are closing one after the other and there were somewhat fewer than 15,000 in 2012, compared to 26,000 in 1982. Not only are they losing their regular customers, they are also having trouble competing with online booksellers. Nevertheless, many are resisting the trend. Despite the statistics showing that young people are progressively turning their backs on reading, books have not yet uttered their last words in the land of the Rising Sun. A fight back is being organized, led by bookstore owners in Tokyo, where a large part of the country’s population lives. In this issue of Zoom Japan we present a collection of articles describing the bold and original initiatives taken by bookshop owners large and small who still believe in the future of paper. Books remain something precious for the Japanese, maybe more so than elsewhere. Like jewels that you want to show off, some booksellers are lavishing them with a lot of care and attention in order to promote knowledge and dreams. For despite being businesses first and foremost, these booksellers who love books also wish to share their experience and knowledge, and whether it is in 12,000 or 17 square metres, the ambition is always the same. The various locations that we have selected all have this desire in common, which explains why they are often so well stocked. Some take advantage of their history, without resting on their laurels, while others innovate and take risks in order to ensure that books continue to exist in a progressively more fragmented society. In this respect, Tokyo is an experiment that deserves to be closely observed and carefully analysed.