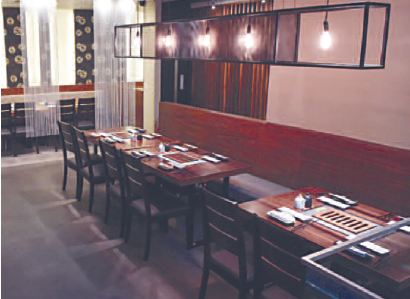 Through an elegantly understated doorway near Chancery Lane station, the recently opened Kintan is providing London with its first taste of genuine Japanese-style yakiniku. Specializing in wafer-thin, bite-sized bits of meat that you grill yourself at your table, yakiniku restaurants are hugely popular in Japan. They are a raucous and invariably smoky good time, thronged with students and necktie-loosened off-duty salarymen. But Kintan provides a more adult and sophisticated take on the genre that should appeal to local lawyers and city-folk: darkly lit, spacious, with a wall of sake barrels on the back wall the only sign that this is even a Japanese restaurant. Smokeless grills at each table are equipped with powerful (and remarkably quiet) extractor fans to ensure that no one’s expensive suit ends up smelling like a barbecue pit. As at yakiniku restaurants in Japan, the menu is all about the meat. At Kintan, the grill section takes up full half the menu, flanked by a concise list of starters and salads on one side and a handful of starches (rice and a couple of noodle options) to mop up all those luscious meat juices on the other. The starters include perennial favourites like steamed edamame (soy beans) and a Chinese cabbage kimchi. More interesting was the tuna tartar volcano – tuna, scallions and spicy mayonnaise served sushi-style on a little lozenge of deep-fried sticky rice. Between the soft unctuousness of the chopped tuna, the fresh crunch of the ball of rice, and the fiery chili kick of the mayonnaise, it’s a little firecracker of a mouthful that kicks the taste-buds awake for what is to follow. While the grill section of the menu included some unusual options rarely seen in Japan like New Zealand lamb chops and halloumi cheese (there’s a short selection of options suitable for pescatarians and vegetarians), we decided to focus on the beef. Eight different cuts are available: from the familiar filet mignon and sirloin to kalbi short rib and bistro hanger steak. After experimenting with meat from several different sources, the restaurant decided to use grain-fed US cattle for most of their beef, as it responds better to the quick grilling techniques of yakiniku and provides a more tender result. The one exception is the beef tongue, which they source in Scotland. The attentive servers will preheat the grill for you, bring you a selection of dipping sauces, and let you know how long each cut should be grilled for. After that it’s up to you. Each table is provided with a couple of sets of neat hinged metal tongs for turning the meat (in most cases, a couple of minutes per side is more than enough). As the UK’s summertime barbecue warriors know, observing heat work its ancient alchemy upon bits of marinated animal flesh satisfies some primal urge within us. Watching and waiting as the fibres tighten and the meat chars against the bars of the grill is one of the true pleasures of yakiniku. We started with the beef tongue. Put aside any childhood memories you may have of those thick, strangely textured tranches of tongue in aspic on your grandmother’s table. Here, the organ is sliced ultra thin, and grilled lightly at the tabletop grill until it crinkles and ruffles around the edges. You eat it with just the merest squeeze of lemon to help cut through the complex, mineral richness of the meat. Even better was the premium kalbi, usually known as short rib in the West, a cut that often gets used in braised dishes where it is cooked until tender. But as both the Argentinians and the Koreans well know, this particular cut works even better on the grill after a night’s marinating. The meat is intensely marbled, which means that it stands up well to the heat of the grill. Our waitress suggested sweet soy as an accompaniment, but we found the meat intensely flavoured and meltingly tender on the tongue all by itself. The drinks list provides a decent selection of Japanese beers and a couple of local brews from the Camden Town Brewery, as well as a dozen different sakes and a couple of different types of the stronger shochu. Kintan provides a sophisticated, rich, hands-on experience quite unlike any other in London. If you’re a meat lover, you’ll leave satiated, happy, and sufficiently smoke free for plausible deniability.