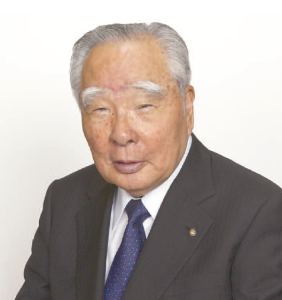 Hardly known outside Japan, Suzuki Osamu has still succeeded in exporting his brand around the world.

The motor industry has always been dominated by larger-than-life tycoons whose vision has lead their companies in new directions and into uncharted territory. Japan’s political and economic world is often more famous for its army of grey bureaucrats who indefatigably work behind the scenes, but Suzuki Osamu is certainly not one of them. In a career spanning four decades, Suzuki Motor Corporation’s 84-year-old CEO has shaped the Hamamatsu based company according to his business philosophy, leading its overseas expansion and leveraging the carmaker’s expertise in small cars to build a dominant market- share in India during his first of two terms as president from 1978 to 2000. Born Matsuda Osamu, the future Suzuki boss actually started his career as a bank employee and only joined the Suzuki Motor Company in 1958. Because of his unique qualities, he was eventually chosen to head the company and, following the traditional custom among powerful Japanese families, married Suzuki Shoko, the grand-daughter of the company’s founder Suzuki Michio, and adopted his wife’s name. Having become president in 1978, he is one of the longest serving autoindustry CEOs in the world.

Like most car manufacturers, the world-famous king of kei cars has been hit by the depressed economic climate. However, Suzuki is confident about the future of kei cars in Japan. “They should keep selling well,” he says. “The current 41% market share that kei cars hold should not see a decrease, and the domestic market is likely to remain around two million vehicles as these cars are very fuelefficient and easy to drive in a country with so many narrow streets”. Suzuki, who is famous for micro-managing his company and his past cost-cutting policies, insists they have to keep going in this direction. “In the years to come kei car companies may need to find a way to cut manufacturing costs even further if they want to continue to be competitive in the market,” he says. “Just making smaller and lighter components is not enough. We must find room for further cost slashing. However, this cannot be done to the detriment of R&D activities which, on the contrary, must be sustained”. To those who say that Suzuki is only famous for small, cheap cars, the CEO points out the company’s long history of technical innovations. “In 1955 Suzuki made Japan’s first mass-produced minicar, the Suzulight. Even though it was a small affordable passenger car, it included such features as front-wheel drive, four-wheel independent suspension and rack-and-pinion steering. It was quite a technical achievement as those features wouldn’t become common for decades. That’s why I think now is the right time for us to raise capital investment and R&D spending. For example, we need to meet popular demand for self-driving cars and environmentally- friendly models. We may have to impose some limits on our expenses, but not on R&D activities”.

Even more than his passion for driving technological innovation, Suzuki is famous for his global vision and diplomatic ability in transforming his company into one of the largest small-car manufacturers in the world. Instead of challenging bigger companies in their own backyard, he began to travel the world looking for new untried markets that his competitors had overlooked. Starting with Thailand in 1967, the Japanese carmaker began to set up factories all around East Asia and the Pacific, a trend it has successfully continued even after Suzuki began his second stint as president in 2008. “At the time, we were facing our first profit decline in eight years as a global recession and tighter lending dented the demand for cars. It was at that point that I became aware of new potential in the Thai market,” he says. “In that country there was a growing demand for cars, so we decided to take advantage of that opportunity”. Shifting some production from Japan to Thailand (and pulling out of the United States in 2012) was also a successful cost-cutting manoeuvre, but Suzuki prefers to stress the long-term merit of his total approach to market penetration. “My lifelong principle has been “Local production for local consumption”, and I have always stuck to it,” he says. “When you enter a new market you cannot just sell your cars. You have to study and understand that particular country to see what you can do to gain their trust. Look at what we did in India. When we started there the market was dominated by oldfashioned cars. We assessed the situation and were able to change that trend by introducing small but modern cars, thus revolutionizing the local car industry”. Though India is still Suzuki’s biggest overseas market, more and more foreign companies havejoined the Japanese car manufacturer in order to get a piece of the action, thus reducing its supremacy there. However, Suzuki is optimistic about the future. “We expect India will accelerate the shift to global free trade under the initiative of new Prime Minister Narendra Modi,” he says. “Like all emerging countries, India’s development is quite unpredictable. The slowdown has hurt all Indian car manufacturers, with sales declining by 4% in October. However, I’m very happy about Suzuki’s market share in India. This is a place with a vast population of consumers and it still remains a very lucrative market with an appetite for quality cars. We, for example, have been able to boost our sales there by revamping our Wagon R and Alto kei cars, and our subsidiary Maruti Suzuki will launch new models to protect its market share”.

Demonstrating that Suzuki still believes in the Indian market, the company is now building a new factory in the western state of Gujarat that should be ready by 2017. “We have selected Gujarat for its good power availability and infrastructure,” Suzuki explains. “They have good roads and an abundant power supply. When this facility becomes fully operational, our total annual capacity will be 3 million cars, up from the current 1.5 million from the Gurgaon and Manesar plants”. One of Suzuki’s many achievements is that his company has never recorded a decline in profits under his leadership. Last year in particular, the Suzuki Motor Corporation made a record profit of 107.5 billion yen, and this year it estimates that it will record a group operating profit of 188 billion yen, while its shares have gained 13%, outperforming the 3.5% decline in the benchmark Topix Index. It is true that Suzuki Motors’ overall revenue is dwarfed by carmakers such as Toyota, undermining its ability to keep up with spending on R&D. However, as Suzuki explains, “In Japan, Toyota is number one, but if you are a car manufacturer you need to have the full range, from small to big cars. However, Toyota does not manufacture the small 660cc kei cars and globally, one-third of the car market happens to be for small cars. So even a giant like Toyota is not able to get that 30% market share. The same goes for General Motors, Volkswagen, or Fiat”. All Japanese kei car manufacturers are now facing new challenges due to the government’s decision to stop subsidizing this particular sector as it used to in the past. As most of the kei cars are too small to compete in Western markets, the government has reached the conclusion that in today’s era of globalized volume sales, Japanese companies cannot waste their R&D money on models they will never be able to export. This has led to stiff tax increases, including higher petrol and sales taxes and – most damaging for companies like Suzuki Motor – a 50% increase of the kei car tax, putting it almost in line with the taxes on normal sized cars. Naturally Mr. Suzuki did not like the news. “To me this looks like bullying a weak person,” he says, “because the tax hike especially penalizes the common people who want to buy good, affordable cars. However, since it was already decided and it is unavoidable, there is no use in complaining.

This has really got me worked up to the point where I feel like I have to do something about it. We must work to increase the 40% market share the kei car currently enjoys”. Another subject about which Suzuki seems to disagree with the government is the influence that the Trans-Pacific Partnership (TPP) is likely to have on kei cars. “The TPP has nothing to do with the kei car market and the whole problem has been distorted and inflated,” he says. “The American government is implying that the existence of kei cars is an obstacle to the selling of American cars in this country. However, in Japan there are no import taxes on foreign cars, therefore each country can produce their own kei cars and compete in the Japanese market on equal terms”. Commenting on the new consumer tax hike implemented by the government in April, Suzuki said that it has not really affected the company’s performance. “The sales for the six months through June have been almost the same as those of the previous year. More good news is represented by the government’s inflationary policy, which has caused salaries to rise for the first time in many years. The bonus that employees received in July was calculated based on their pay rise, helping to boost their spending power. I must add though, that a salary increase is something that needs to be planned carefully. I understand the government’s reason for requesting it, but this does not mean a company can follow what politicians have decided on paper without first checking their purses. After all, we are talking about a company’s right to manage as it thinks fit. Only after careful judgment can we decide what is best for our company”.