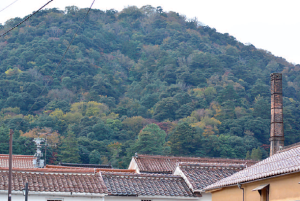 700 kilometers west of Tokyo, Tottori prefecture has much to attract the curious.

It all starts on a train, as it did for Nakahara Hiroshi, the main character in A Distant Neighbourhood (Fanfare, Ponent Mon). The idea of this journey is to discover the region in which Tanugichi Jiro, Manga artist and one of Japan’s greatest draughtsmen, was born. Interestingly enough, Taniguchi’s fame in his native Japan is certainly not on a par with his impressive talent. Although it borders the Sea of Japan, the beach is far from being the main attraction in Tottori prefecture.
With mountains nearby as well, the diversity of its landscape will please even the most demanding of travellers. The first stop on this journey is Kurayoshi, a small city through which the Ogama, Kou and Tenjin rivers run, and in which the old quarter is dominated by the main attraction, Mount Utsubuki. After leaving the station through the southern exit(minamiguchi) and dropping off your luggage in the station lockers, the atmosphere is very different from that in A Distant Neighbourhood.

To discover it like the hero in the story, you must get on a bus (230 yen, get off at Akagawara – Shirakabedozo), or if the weather is good, take a thirty-minute walk through this typical provincial Japanese city. Walking down the long avenue outside the station you will probably notice that the architecture here is rather boring, but if you are a gourmet, there are a couple of places you should definitely stop at. Taniguchi Jiro confided to us that he is a great lover of noodles, and Kurayoshi has all you need in terms of ramen restaurants. Nevertheless, two places really stand out. The first is on the right hand side when walking down the avenue and is situated at the back of the carpark reserved for customers of the Geo shop. Koga is one of the 66 best ramen restaurants in the prefecture. Despite looking remarkably like a canteen, it offers delicious food that is said to evoke “nostalgia for the good old days”. Its amazing natsu uma ramen (550 yen, tel. 0858-26-7288) has even acquired a reputation that extends beyond the city’s borders, and the dish is a good match for the atmosphere evoked by the drawings of the manga artist.

Opposite is another great ramen restaurant with a reputation among lovers of noodles. Gottsuo ramen has been serving ramen in beef broth since 2004 (650 yen, tel. 0858-26-3813) and is so good that not a drop of it will go to waste. The atmosphere is a little cosier than Koga’s, so we would recommend it for more relaxed dining.
At the end of this long straight route, follow the curve and walk over the river Tenjin. When approaching Mount Utsubuki, visible on the horizon, you will come across a glass and metal building on your left whose architecture stands out from the rest of the city. It was built by the American-Argentinean architect Cesar Pelli and it houses the Nashikko kan pear museum. This is an amazing place where you can discover everything there is to know about pears, the fruit that are now the pride of the local region thanks to the Nijusseiki nashi or “20th century pear”. Just a few hundred metres away, you’re in a different world.
Just like Nakahara Hiroshi, you will feel you have travelled back in time. The ancient district of Kurayoshi lies before you, complete in it’s bygone charms. The old factories with their characteristic white walls, old shops with their old-fashioned signs and narrow little streets that contrast with the wider thoroughfares closer to the station. There’s something exciting about plunging into the past, although the exploitation of the district in order to encourage tourists means it has lost some of the human side as depicted in the manga. Nevertheless, as soon as you walk away from the old factories that have been turned into souvenir shops, you will rediscover the atmosphere of A Distant Neighbourhood. Near the Akagawara-Shirakabedozo bus stop is a small railway museum (Kurayoshisen tetsudo kinenkan) – entrance is even free. This is perhaps the only museum on earth where the visitors are asked to turn the lights on and off when entering and leaving. It isn’t full of treasures, but its many photographs will give you an idea of a past era, when the Kurayoshi line was still in use between Kurayoshi and Yamamori. In fact, the museum building is actually Utsubuki’s old railway station, which was abandoned in 1985.

When you have finished walking through the small streets that run alongside the river Tama, climbing Mount Utsubuki might interest you. It appears inaccessible from a distance, surrounded by what looks like a dense and impenetrable forest, but this forest is actually full of treasures that are well worth the good hour’s walk. In spring, when the cherry trees are in bloom, it is a wondrous sight that well deserves its place as one of the hundred most beautiful sites in the archipelago to admire the cherry blossom. Just 20 minutes away by taxi you’ll find Misasa spa (Misasa onsen), which is currently celebrating 850 years of existence. It is an ideal place to relax and spend the night after a full day of travel, and there’s plenty of choice for lovers of hot baths and good food. One of the features at Misasa is its water enriched with radium and radon, which was discovered by the French chemist Marie Curie in 1898, so it is unsurprising that she is celebrated here. The price for a night including two meals varies between 13,000 and 21,600 yen according to the hotel. One of the best is Misasakan (tel. 0858-43-0311). Apart from its affordable price (13,650 yen per night), this establishment has a beautiful Japanese garden that can be admired while dining or from inside the vast entrance hall. The service is flawless, which will encourage you to stay longer – in fact, Misasa means “three mornings”, and it is said that this is the number of times you need to take a hot bath in the spa in order to rejuvenate and regain your fitness. You can reach the spa with one of Misasa’s free shuttles, and then hop onto a train to Yura, just ten kilometres further on. If you’re lucky, you might get to take the Conan train, which is decorated with the image of Aoyama Gosho’s famous manga character. Not only is it the region where Taniguchi Jiro was born, Tottori is also where Mizuki Shigeru, the brilliant creator of Detective Conan, grew up. The international fame of his character has transformed the town of Hokuei, which has a museum dedicated to the artist, with Conan in pride of place. Yura’s railway station is officially nicknamed Conan Station, with a beautiful bronze statue of the international hero, and just fifty metres from there is the town library, also decorated in the character’s colours. To visit the Gosho Aoyama Manga Factory (9.30am-5pm, 700 yen), just follow the signposted route for twenty minutes, cross Conan’s Bridge and admire a few drawings and sculptures. The museum is recognizable by the yellow ladybird parked in front of it, and unlike most other places dedicated to mangaka, you are allowed to take pictures (with some exceptions). The Manga Factory will especially please the fans of this prodigious mangaka.

Your next stop is Tottori itself, which provided the background for Taniguchi’s ‘My Father’s Journal’. Famous for its sand dunes (Tottori sakyu) that attract hundreds of thousands of people every year, the main city of the eponymous prefecture, partly destroyed in a huge fire in 1952, has preserved an intimate atmosphere that permeates the manga artist’s work. Two places close to the railway station illustrate this perfectly: The craft museum (Tottori mingei bijutsukan, 10am-5pm, closed on Wednesdays, 500 yen) and the restaurant Takumi kappoten (tel. 0857-26-6355) right next door. In both these places you will find objects that embody the soul of Japan in both their beauty and their simplicity. While walking around this town you get the impression that you might be wandering in a dream, just like Nakahara Hiroshi. Enjoy a bowl of gyudon (beef stew on a bed of rice, 1,080 yen), before hopping back on a train towards other regions that are dear to Taniguchi, such as the Japanese Alps. It’s an adventure in time.