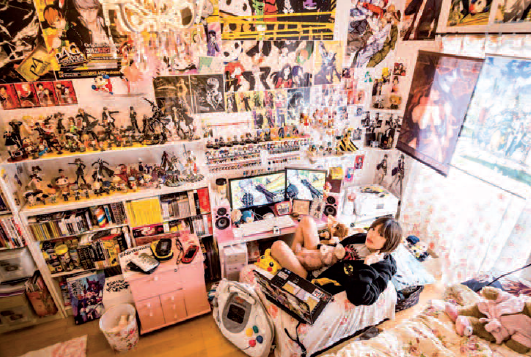 Photographer Kawamoto Shiori invites you to immerse yourself in the world of otaku in this must-read book.

In the past, the iconic group known to the world as “otaku” used to be portrayed – particularly in Japan – as an antisocial bunch of nerdy guys sporting flannel shirts, dirty hair and sweaty faces. However, recent acceptance from mainstream society has brought about new interest in their lifestyles. Digging deep under the stereotypical surface, the media’s curious gaze has thus discovered a more varied and fascinating landscape populated by people of different ages and from different walks of life. Now we have a fair knowledge of the public face of the otaku lifestyle (their favourite shops, maid cafes, events, etc.), but what about their private lives? Where do they live and what do they do behind closed doors? In order to satisfy our insatiable voyeuristic appetite, a number of photo books have recently appeared that document this “secret” side of being an obsessive geek. One of the more interesting is “Daraku Heya” (Debased Rooms) by boyish-looking, 40-year-old photographer Kawamoto Shiori. His collection of interiors and portraits is particularly fascinating because all his subjects are young women, thus contradicting what many (or most) people think about being an otaku. Among the 50 female geeks featured in this 160-page book, there are not only your fair share of typical manga and anime fans, but also “glasses idols,” weapon lovers, compulsive knitters and even a self-professed “penis artist”. Whatever their overriding interest, they pursue it with such a passion that they often end up filling every corner of their rooms (sometimes even the ceiling) with their objects of desire. For instance, there is 34-year-old Nijiiro Pony who spends her free time hunting for My Little Pony goods, or Takagi Ayako who declares her love for American comic artist Jim Woodring and has a room full of Sof’Boys and Frank Kozik figures. 19-year-old Boruta next 5 works in a maid café and her rather spacious room is equally divided between Pretty Cure merchandise and big stuffed toys, while Morishita Yuniko’s cramped living space resembles a disaster shelter. Mixed in to this pyrotechnic parade of geekiness there are also a few professional “idols” such as Furukawa Mirin and Yumemi Nemu of Denpagumi.inc fame. The book title actually refers to what idols call the dormitories they live in, as otaku idol groups often live together in ramshackle apartments until they hit it big, and their rooms become so cluttered with crap they become “corrupted” or “depraved”. However, there is nothing that is actually depraved in the pictures Kawamoto has taken. Avoiding the interior magazine look, he shot the rooms as they were, and it is true that most of them don’t seem to be suitable for living in, but all these young women look quite comfortable there. These candid snapshots show unrestricted excess and shameless indulgence – in other words, the purest expression of being an otaku – but what clearly shines through from each and every photo is the subject’s happiness in being surrounded by her friends; feeling safe and secure in her own world. The rooms are often arranged in a way that your eyes meet a part of their collection wherever you turn. For some people they may look rather claustrophobic, but these girls don’t seem to mind. These are, after all, their very own personal oases.