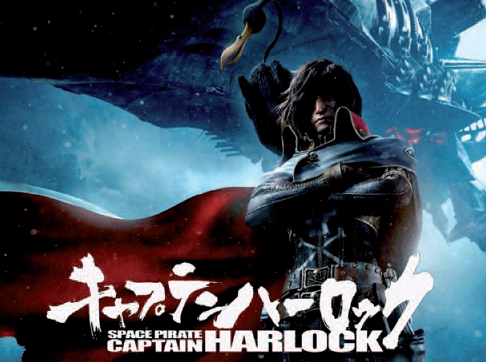 This film adaptation of the cult series created in 1969 proves to be a great success – despite some imperfections.

First created in 1969 as a manga, the animated version of Space Pirate Captain Harlock arrived in Europe soon after it first discovered Japanese animation. However, in contrast to its competitors, the animated version had better scripts and the same attention to visual detail that the original manga series did. The same can be said of the recent adaptation for the cinema. James Cameron, a great connoisseur of the silver screen, calls the film “Mythic, epic and visually innovative”. Our own review comes to pretty much the same conclusions and Shinji Aramaki’s “Harlock Space Pirate” proves to be a very beautiful space opera in every sense of the word, but without doubt mainly due to its graphics and movement. “Harlock Space Pirate” is much more realistic than other computer generated animation films, and reaches new heights in style and design for its space sets, the ships and the characters, although the latter, despite good performances, do not quite match up to the former.
The hero, Captain Harlock, is described as a “space corsair”, but this is not quite accurate. A corsair or privateer works for a sovereign for money, while those who plunder ships for their own selfish benefit and that of their crew are known simply as pirates. Harlock is strongly opposed to the governmental regime in his universe and tends towards anarchist behaviour, which definitely places him more in the pirate camp. This is further emphasized by his eye patch, the flag at the mast of his ship and the white skull ram on the prow that splinters enemy vessels when he boards them, echoing what happened at sea during the 17th century. One of the film’s biggest draws though, is the characterization of Captain Harlock himself. He is more complex and tormented than in the original series, and no longer just a “simple reaver”. He is elegant and quiet, but a tortured and secretive leader, whose charisma is apparent throughout the film, though it is downplayed in the storyline. This subtle handling of the characterization was a wise move that might surprise (in the good sense) fans and help newcomers discover this hero one step at a time, leaving them longing for more once the lights are turned up. Finally, the production values and the effort put in are immense, with 5 years of work, 150 people behind the special effects and 100 million computer files created. However, the film does not use it’s impressive production values as a crutch. The plot is worthy of the best space operas, with a dark and tortured hero, who is a romantic figure if ever there was one, and great sidekicks who all play their part. The script does get a little muddled around the end, but this does not detract in the least from the pleasure fans of the genre will experience.