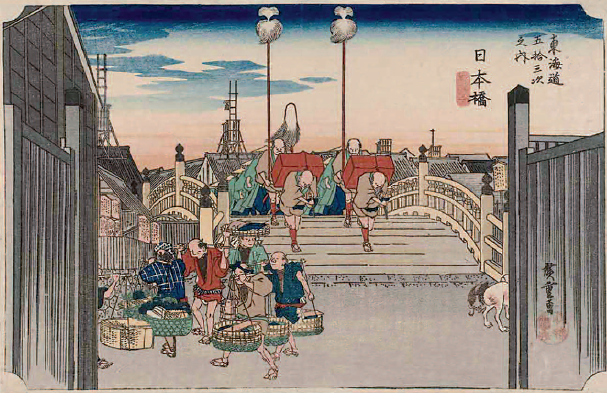 Several sections of the famous road that links Edo to Kyoto are accessible. We travelled along one of them.

A meeting place was agreed on: Nihonbashi in Tokyo. Built more than four centuries ago, this bridge, initially made of wood, was the starting point for the main routes travellers had to take to reach Kyoto. The “Japan Bridge” symbolized the starting point of the Tokaido and Nakasendo roads that led to the imperial capital, the first running alongside the Pacific Ocean, with the second passing through more mountainous landscape. These two roads were part of the Gokaido, the name given to the five principal routes the shogunate authorities planned and marked out to connect Edo to the rest of the country. The task of uniting the archipelago was difficult to accomplish, and it was important to maintain roads, especially as the mountainous topography made it problematic to travel around.

The journey of around 500 kilometres that separated the two cities would take two to three weeks depending on the weather conditions, and sometimes certain sections were completely inaccessible. Each of these routes had “way stations” where travellers could stop to rest and have some food, although long stays were strictly prohibited. As specified in a 1686 decree: “All travellers will be checked. It is permitted to stop for one night at an inn, but it is forbidden to stay any longer. Everyone, including migrant workers and individuals who behave suspiciously, will be reported”. In other words, tourism was forbidden, despite the surroundinding landscape being extraordinary, as illustrated in Utagawa Hiroshige’s engravings after his journey along the Tokaido in 1832. In his famous series called the Fifty-Three Stations of the Tokaido, the master painter offered an astonishing graphic representation of the mythical road whose origins date back to the 11th century, to all those who have not seen it.
With the arrival of railroads at the end of the 19th century, the world changed radically. Since July 1889, the Tokaido route has become synonymous with the railway, and it entered a new era when the Tokaido shinkansen express train between Tokyo and Osaka came into service in October 1964. The journey now takes two hours rather than two weeks, and we hardly have time to enjoy the landscape. You might catch a glimpse of Mount Fuji, but most of the stations the train passes through do not have anywhere near the same charm as those alongside the original route. That’s why, on this beautiful early spring morning, we have decided to go back in time to rediscover the joy of the old road, in the manner of the walking tours that are now all the rage in Europe. Instead of taking the route of Santiago de Compostela, we chose to travel along the Tokaido, or at least to follow some of it. Just like travellers before us, we decided to meet up at Nihonbashi. Unfortunately, the wooden bridge has disappeared and was replaced in 1911 by the present-day structure that is almost hidden from view by an elevated motorway. To see what the first bridge looked like, you need to go to the Edo-Tokyo museum where there is a reproduction of part of it. Or if you have the time, go to the Toei studios in Kyoto where they have an accurate copy used for films set in that epoch.

From Nihonbashi it takes just ten minutes on foot to get to Tokyo station to catch a train to leave the capital. The orange and green carriages of the JR Tokaido line are easy to spot. The trip will take around 2 hours and 30 minutes, but only 1 hour 30 minutes if you choose to get the shinkansen to Mishima instead, and then take the main line to Yui station – the starting point of our journey on foot. In the Edo era, it took four hours to reach this place. If you haven’t had breakfast, you can buy an ekiben (a lunch box sold in the stations) that you’ll be able to savour while enjoying the view, especially when the scenery improves dramatically after passing through Ofuna station.
On catching sight of the majestic shape of Mount Fuji, you’ll know that the train will be arriving soon. Yui station is the second stop after Fuji station, and the starting point of the JR Minobu line, which is also worth a ride. The first walking stage of our journey is about two kilometres to the east. It’s a small detour as our final destination, Okitsu, is located east of Yui, but the short trek there and back is worthwhile, as it takes you to the former Yui station (Yuishuku), the sixteenth out of fifty-three stations that were once situated the length of the Tokaido. The old waypoint is very pleasant and the old buildings in the style of the period recall a time when travellers were able to stay in one of the thirty two inns in the vicinity.

In the park surrounding the old fortress of Yui (Yui honjin koen), you’ll find Miukitei (open 9am to 5pm, except Mondays, entry: 150 yen) where the emperor Meiji once stayed, but it’s the Hiroshige museum (9am to 5pm, closed Mondays, entry: 510 yen) that attracts the most visitors. This is the only establishment with a collection entirely dedicated to the master engraver. Its official name is the Hiroshige Tokaido Museum (Tokaido Hiroshige Bijutsukan), and there are 1,400 works on display here, a great number of which, of course, depict the Tokaido. With the image of all these beautiful pictures in your mind, it is time to take to the road again, back towards Yui station. On your way, you’ll notice the harbour and the cooperative shop where you can buy delicious sakura shrimps, a speciality of the region. However, unless you are properly equipped to keep them fresh, it might be better to eat them in one of the many restaurants you’ll pass on your journey. One of the most hospitable is Kurasawaya (11am to 3pm and 5pm to 9pm, closed on Mondays, call 054-375-2454), just 25 minutes away from Yui station. This delightful eatery can prepare the shrimps in thousands of different ways for just 1,836 yen. If you don’t appreciate shrimps, don’t panic, the sashimi platters are sure to please too. Before taking a well-deserved break, don’t miss out on the Little Museum of Light (Tokaido akari no hakubutsukan) and its incredible lamp collection (open 10am to 3pm, closed Mondays, 500 yen). Full of energy after a delicious breakfast, continue heading west towards the orchards of mandarin trees. Depending on the season, you can purchase bags of mandarins (100 yen) to take with you as you climb up the Satta Pass, so beautifully depicted by Utagawa Hiroshige while on his visit to Yui. The slope is steep, but the spectacular view is well worth it. Opposite you stands Mount Fuji, with an impressive view over the Pacific Ocean.
The only drawback is the presence of a motorway a little lower down, but it still doesn’t succeed in spoiling the enjoyment of the scenery. The pine trees that appeared in the famous print by Hiroshige have given way to mandarin trees, and the white sails he drew have disappeared, but you are still bound to be won over by the beauty of the place, just as the master was on his visit. This pass was first opened in 1655, and before then travellers had to follow the coastline and were unable to take advantage of this incredible view where mountain and sea intermingle. At the time, the coast road had a reputation for being dangerous due of its proximity to the waves of the Pacific Ocean. The opening of the Satta Pass combined the practical and the enjoyable, even though the climb requires some effort.

At the end of this long pause to admire the sleeping volcano, listed as a Unesco World heritage site in 2013, the trip continues westwards towards Okitsu where you’ll find a train back to Tokyo. Make sure you leave three quarters of an hour to get there, or a bit longer if you take the time to visit the town itself, notable for the Munakata temple dedicated to one of the principle deities who protects sailors. For the whole length of this long walk, you’ll be following in the footsteps of men and women who have taken this route through the centuries in all weathers. After such exertion, one excellent way to recover is to spend the night in a hot-spring resort near Atami, on the JR Tokaido line, rather than returning straight back to Tokyo.