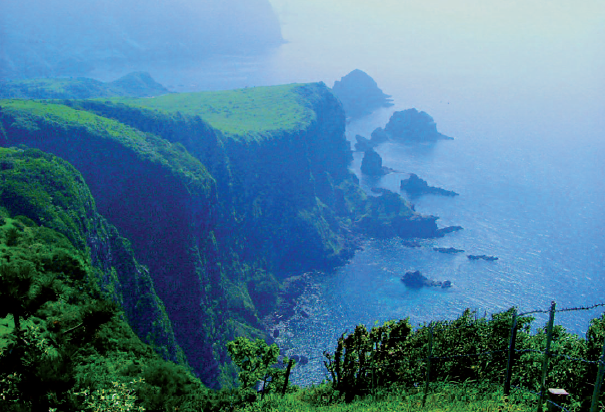 If you are looking for a place where you can recharge your batteries, then think about travelling to this unique archipelago.

Prize-winning novelist and former Japan resident David Mitchell once remarked “If you only make one trip while you are in Japan, make sure it’s to the Oki Islands”. They are, he claimed, a little patch of Old Japan as yet untainted by Pachinko, high-rise apartments or junk-food joints: the perfect antidote to big city stress.
Only 40 miles, less than a three-hour ferry ride across the Japan Sea, separates the Oki from the coast of Western Honshu, but it’s as if you’d travelled back three centuries. As one visitor noted “If it wasn’t for the roads, this place would be all forest”.

Dogo, the largest island, has been accessible by plane from Osaka since 1965, but tourism hasn’t exactly boomed. The Okis have traditionally been considered so remote that two emperors were banished there: Go-Toba in 1221 and Go-Daigo in 1332. Still, there are positive signs for the future, as the Okis were admitted into UNESCO’S Global Geoparks Network in 2013, thanks to their unique ecosystem and geohistory. In the year that followed, Nishinoshima, the second largest island, registered 270 foreign visitors, nearly twice as many as in 2012. But happily, the Oki still remain unspoiled and uncrowded, despite the increased popularity. If time isn’t an issue for you, the standard ferry is by far the most enjoyable option for getting there, as the plane journey is over too fast. After all, the whole point of visiting the Okis is to experience life at a slower pace, to escape the hurry that poet Matthew Arnold called “this strange disease of modern life”.
After a couple of hours at sea you espy the first islands – black volcanic humps like debris from some cosmic collision. Soon the ferry is weaving its way through a veritable maze of these humps, some just bare rocky mounds, others large and rugged, dark with pine trees. There are some 180 islands in the Oki chain; none are very big and only four are inhabited: Dogo, Nishinoshima, Ama (Nakanoshima) and Chiburijima. Each has its own charm, character and must see attractions, such as the astonishing Kuniga coastline on Nishinoshima, the second-largest island with a population of 3,900. Kuniga is a seven-kilometre stretch of wave-eroded basalt cliffs, crowned by the perpendicular Mantengai.

At 257 metres, it’s Japan’s tallest cliff. In recent years, these surreal natural sculptures have become a popular backdrop for sea-kayaking and diving, just two of the many marine sports available on the islands.
Take a small speed-boat from Beppu port on Nishinoshima for a close-up appreciation of just how spectacular these cliffs are. Phantasmagorical rock formations rise out of the sea, some like craggy giant’s fingers, others forming natural arches to the shore. Each one even has its own evocative name, such as the Palace of the Dragon King, or the Bridge to Heaven. The ride takes a nail-biting turn when, in apparent defiance of common sense and the laws of physics, your boat suddenly heads toward a narrow crevasse in the red and black cliffs, hardly wide enough for a bicycle, never mind a boat. Nevertheless, the boat slows to a crawl and inches straight into the darkness of the cave, so narrow the walls will graze your elbows if you’re not careful. Then for the fun part: the driver turns off the lights, leaving you enveloped in total darkness. Hence the cave’s name, the Cavern of Light and Dark. Happily, after a few eerie moments, a crack of light appears up ahead and you emerge safely into sunshine and open sea. Back on terra firma, a voice issues from a loud speaker at the Town Hall, informing everyone that it’s 6 o’clock and time for all young children to go home. With appetites invigorated by the sea air, you can now head back to your minshuku (private guest house) for dinner.
It’s a good idea to book accommodation at one of these traditional pensions before you arrive (Nishinoshima Tourist Office is happy to book for you), and most minshuku are run by charming old ladies. If you are lucky, you may even find your landlady waiting for you at the quayside, waving a little flag and ready to guide you to your lodgings.

A curious tradition at the island’s minshuku is to write the guests’ names on a small slate blackboard on the wall outside. Not a good place for fugitives to hide away. In your room, a pot of freshly-made green tea and some azuki-bean pastries await you on a low table, the only furniture in the room besides the TV.
Sitting on the tatami floor at a long low table in the dining-room with the other guests, you’ll be treated to a feast of colourful fare consisting entirely of local produce: freshly-caught seafood including squid, hirogi (a kind of scallop with bright purple or orange shells), sazae (turbot shells) and a whole sea-bream, ornately laid out in rows of sashimi slices between the head and tail (left intact), accompanied by burdock, aubergine and lotus root that have been scrumptiously fried in tempura batter.
The next day, walking around town you may notice what look like white socks spinning round on small motorized driers. Closer inspection reveals that they are squid torsos, gutted and cleaned. Squid are a major business in the Oki, where fishing and tourism are about the only industries. Indeed, squid tends to appear on the menu for breakfast, lunch and tea! Squid are even celebrated at Yurahime Shrine, located at the end of a small inlet and dedicated to a Deity of the Sea. In the shallows, you’ll notice life-size two-dimensional hardboard figures of people bending over with their hands cupped, and may wonder what these are all about. The answer is simple, as in good years the little cephalopods throng here in such numbers that locals can catch them with their hands. On the next day, catch a bus from the port up to the top of the Kuniga cliffs for a bird’s-eye view of this natural wonder. The cliff-top trail has been voted one of Japan’s Best 100 Hikes. It’s a dreamy realm of wide-open spaces and soft emerald pastures, ruled by cows and horses that love to prove their superiority here by dozing immovably in the middle of the road, blocking traffic as if holding a sit-in protest at the civilization encroaching upon their verdant idyll. Atop the cliffs you can stand entranced by the tranquility as wraith-like wisps of mist stream over the rocky coves hundreds of feet below.

No less enchanting is the mysterious Takuhi (Burning Fire) Shrine. It is the Oki’s oldest shrine, hidden away on top of the island’s tallest mountain (452 metres) and it’s most curious feature is that it stands half inside a cave, with the other half sticking out as if left that way because it didn’t fit. The countryside on the way towards the shrine is delightful: narrow roads wind round gentle green hillsides dotted with mossy shrines and cattle with oddly twisted horns, while black butterflies the size of bats flop lazily from flower to flower. Then, where the asphalt runs out and the steep overgrown path to the shrine begins, you see a wooden box containing stout sticks. You are advised to take one, but they are not walking sticks and are actually for beating the undergrowth to scare away the snakes as you tread the narrow path. The constant chirping of the cicadas becomes an intimidating roar as you beat your way up the narrow path through thick vegetation. The humid claustrophobia of Takuhi’s snake-andmosquito infested kingdom is a world away from the airy heights of the Kuniga cliffs. The occasional clearing offers tantalizing views of the sea, shimmering gold in the sun, with mist-shrouded islands stretching away like a dragon’s tail. In front of the shrine stands a magnificent 800-year-old cedar, while the shrine itself is every bit as astounding as the rumours suggest. Locals will assure you it was built by being pushed out of the huge cave sometime in the mid-Heian Era (794-1185).

Like Yurahime, Takuhi Shrine is dedicated to the same Sea Guardian Deity. In olden times, islanders lit a beacon outside the shrine to guide boats into the bay in bad weather (hence the name Burning Fire, or Torch Shrine). It was even impressive enough for the famous artist Hiroshige to have commemorated the scene with a woodcut. Boats still sound their horn when coming in sight of this unique shrine. Gazing on this magical scene, with the forested mountainsides glistening in the soft afternoon sunshine, pause to remember the two emperors banished here 700 years ago. It’s hard to avoid concluding that, as far as banishments go, being forced to spend the rest of your life here doesn’t really seem like such a terrible punishment.