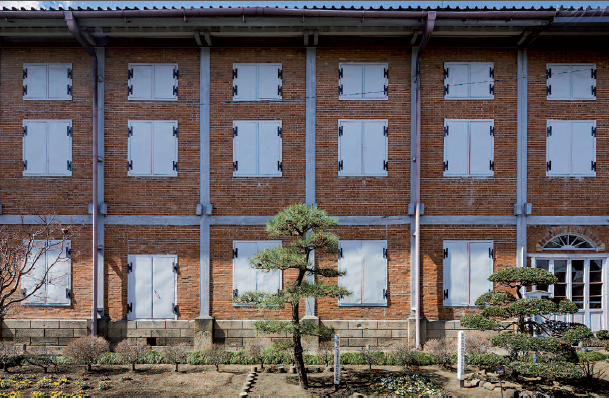 Japan owes a Frenchman for its its first modern silk mill, now listed as a world heritage site.

While their economy might not be doing too well, the Japanese are taking great pleasure in rediscovering their industrial heritage. After having neglected this aspect of their history somewhat, they have now realized the importance of preserving it in order to highlight the effect that the industrial revolution of the late 19th century had on a country that was emerging from two hundred years of isolation. Industrial architecture, as well as areas of natural beauty, is an excellent way of attracting tourists, especially if it enjoys international recognition. For this reason, the government has responded to requests from local authorities by supporting their attempts to register industrial infrastructure as UNESCO World Heritage sites. At the beginning of July, Tokyo succeeded in having 23 sites listed from the industrial revolution that took place during the Meiji era. This even included Hashima Island (see Zoom Japan no. 5, November 2010), despite the controversy surrounding the use of Korean and Chinese forced labour in its Miike coal mine. This kind of thing was not a problem facing the Tomioka silk mill in Gunma Prefecture, north of Tokyo, when it obtained its World Heritage listing in June 2014, no doubt helped by the soft and luxurious nature of what it produced. The mill has always benefitted from a lot of local support, which is evident even now to anyone arriving at Joshu-Tomioka railway station. The station building was opened in 2014 and acts as an architecturally interesting introduction to the silk mill itself. Designed by Takei Makoto and Nabeshima Chie from the TNA agency, it is mostly built of brick, the same building material used for the original construction of the mill in 1872, but without trying to reproduce a retro style. On the contrary, it has a definite contemporary feel to it. Bricks cover the floor and rise up to become seating, creating boundaries between the spaces without ever closing them off completely. Slender white poles are grafted onto these three dimensional elements and support simple slabs that help define the space as a whole. After this first taste of the wonderful surprises to come, a short walk of fifteen minutes leads you to the entrance of the industrial complex itself, the site of which was chosen by Frenchman Paul Brunat. Don’t worry about getting lost – just watch where the many visiting Japanese tourists go, or follow the signs that have been in place since last year. As you walk along, numerous little shops and restaurants will reassure you that you are on the right track.

The retailers of Tomioka all welcome you in their own particular way by displaying pictures and posters in their windows depicting all that the town and the region is proud to offer. As the walk ends, you come to an impressive brick building reminiscent of some industrial sites in northern France. This is not surprising as the factory was built to the plan of Edmond Auguste Bastien, who worked with François-Léonce Verny at the Yokosuka Naval Arsenal, yet another example of the French presence during this key period of Japanese history. It was for very practical reasons that Paul Brunat, previously employed by a German trading company in Yokohama, chose Tomioka as the ideal site for the silk mill, as besides needing silk cocoons, the coal and water necessary to make it work were also available nearby. In response to the wishes of the Japanese authorities who wanted to create a large-scale silk industry, this Frenchman, who had worked in the silk industry from a young age before joining a wholesale business, created a silk mill that was very large for its time – 140 metres in length, 12 metres in width and 12 metres in height. On entering the enormous room housing the machines that split open the cocoons, you can’t help but be impressed by its scale as well as the concept behind the building. Here you will discover how it was built with the construction of a wooden framework between the bricks. Passing through this enormous silk cocoon warehouse, you can see architectural influences from both the east and the west. These wonderfully preserved buildings are remarkable and underline Japan’s extraordinary industrial development. Once the silk mill was up and running, it’s production soon became the best in the country, and barely a year after its inaugura tion it led to Japan being awarded second prize at the Vienna World Exhibition in 1873. Built in a completely different style, but still in pristine condition, you will find the Brunat family home where the French instructors, who were brought over from France and were responsible for educating the female silk spinners, used to live. If you have a smartphone, you can download an app in French (and English???) that will help you find your way around and give you information about the mill, which continued to produce silk until 1987. You can also rent audio guides for 200 yen. Tomioka is designated a National Treasure by the Japanese government and it is well worth a visit, as it tells the story of both the stark transformation of the country and the importance of the interaction and exchanges with Europe that took place little more than 150 years ago.

To get there
On leaving Tokyo, take the shinkansen Hokuriku line as far as Takasaki, taking around an hour. Change to the Joshin line to Joshu Tomioka (30 minutes). The mill is ten minutes from the station on foot. Open 09.00 – 17.00 (closed Wednesdays) entrance: 1,000 yen.

Photo: Jérémie Souteyrat / Silk Me back