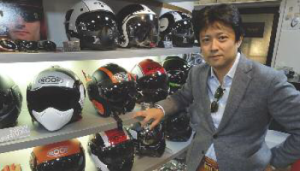 Biker culture is changing in Japan. It needs to adapt to an ageing population.

For many people around the world, Japanese motorbikes are still synonymous with two things: MotoGP racing and bosozoku biker gangs. However, many things have changed. Zoom Japan had a chance to talk to Okabayashi Michinori, owner of the Motorimoda chain of motor-wear shops, about how Japanese biker culture has changed in the last 20 years. Okabayashi, 41, has been in love with motorbikes since he was 18. “It was my younger brother who introduced me to the joys of riding,” he says. “When I was in high school I wasn’t all that interested, but when he bought his first bike I saw he was having such a lot of fun and decided to follow his example. So I got a driver’s licence and bought my first bike, a 250cc Honda”. Okabayashi was born in Kochi prefecture, in the southern island of Shikoku, where he lived until he graduated from university. Kochi is the largest but least populous of Shikoku’s four prefectures, and in many respects it’s an ideal environment for someone who owns a bike. “That’s true,” Okabayashi says. “Between the mountains, the coast and the countryside there are plenty of places where one can enjoy riding. This said, I must confess I much prefer riding in the city. I know that many bikers can’t wait to leave the city behind and have the freedom to speed up a mountain road, but for me it’s the opposite – I just like the kind of congestion and confusion that other people want to escape from. Speed is not all that important for me either, and riding in the city is also safer”.

While Okabayashi’s first motorbike was a Honda, he later bought a Harley Davidson and currently owns an Italian MV Agusta. “They are all quite different,” he points out. “Japanese bikes in general are quality machines that highlight the makers’ attention to detail. They are very reliable and are not bad aesthetically. When I bought my first bike it was just natural to go for a local brand. However, when I began travelling to America and Europe for my job, I couldn’t help being attracted by their products. European bikes have a superior design. They are so beautiful, but have excellent mechanics too. My current MV Agusta has a 750cc engine”. Okabayashi thinks that owning a bike in Japan has its pros and cons. “On one hand, the biggest problem right now is finding parking space,” he says. “Until a few years ago one could park a bike anywhere, but now you just can’t do that. Not only are you going to get a ticket, it’s pretty much impossible to park, even illegally. In Europe, some spaces are reserved for bikes, but in Japan there is nothing like that. So you are left with private parking lots. On the upside though, two people are allowed to ride on the same bike on a highway now. Incredibly enough, it used to be forbidden, but luckily they changed the rules about 3 to 4 years ago. Sharing a bike on a Metropolitan Expressway is still a no-no, but highways are okay. Unfortunately, riding on a motorway is relatively expensive, as a bike has to pay as much as a kei-car”. Many foreigners who live in Japan often complain about the poor driving skills of the Japanese. However, Okabayashi doesn’t really share their opinion. “I don’t know, there are good and bad drivers everywhere,” he says, “but if you look at the statistics, in Italy every year more than 20,000 people die or are injured because of traffic accidents.

In Japan, the number of accidents is decreasing every year, and the current figure is about 6,000 even though Japan’s population is double that of Italy. So it seems we’re not so bad after all” (laughs). On more than one occasion Okabayashi has had a chance to ride a bike abroad, and has come to appreciate biker culture in Europe. “I mainly know France and Italy, and in those countries people seem to know many different ways to enjoy their bikes,” he says. “Compared to the Japanese, the Italians and French seem to have much more fun. For many people in Japan the bike is basically a means to go places, especially at the weekend or during the holidays. Another important difference is that in Japan most people’s idea of having a good time is touring around the country, i.e. leaving everyday life behind and entering a different world of freedom, speed and adventure. But in France and Italy bikes are more part of everyday life. That’s exactly the kind of total biker lifestyle I have been trying to introduce to Japan”. After riding a bike for the past 20 years, Okabayashi has witnessed a gradual decrease in the biker population. “There are definitely fewer bikers around,” he says. “Every year the number of people who own a bike is dwindling, especially among the young. I guess the way they like to spend their free time and money has changed a lot. 20 years ago they had many fewer options, but now they have computers and smart phones to keep them busy. And keeping a bike is not cheap either: there’s bike maintenance, the cost of a parking space, then every other year there’s shaken (MOT tests) which cost about 100,000 yen. All these things just add up”. Because of the shrinking local population, Okabayashi believes the Japanese bike industry will have to look for new markets abroad. “It’s not only the number of bikers but the Japanese population as a whole that is shrinking and ageing,” he says. “So we need to plan for the future and try to introduce our quality products to other countries. For bike manufacturers, of course, China and South-East Asia are very promising markets”. As for Okabayashi himself, riding is still one of the best things in his life. “I mentioned my little brother’s influence, but even before that I remember that whenever I was riding in my dad’s car as a child, I absolutely loved to stick my head out of the window and feel the wind in my face. That’s the same feeling I have when I ride my bike, only much stronger, and it’s further enhanced by the smell of each particular place, like the trees on a mountain or the sea on a coastal road. There’s nothing quite like riding a bike”.