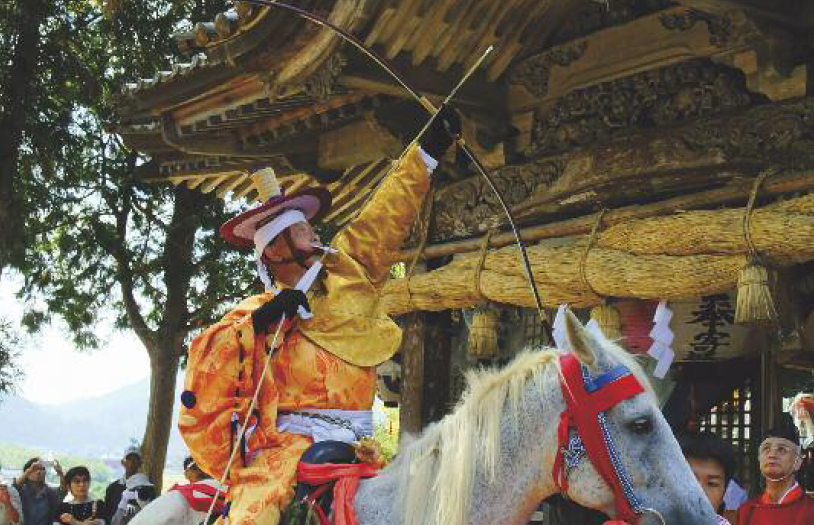 There is an ancient ritual held in the mountains surrounding Hiroshima that is well worth seeing.

Yabusame (horseback archery) originated in the 6th century as a ritual for warriors to pray for health and good fortune. It was originally performed only within shrine precincts and during the Kamakura period (1192-1334) it developed into a spiritual and physical exercise for instilling Zen-like focus into samurai warriors. It is believed that yabusame was first performed in the Usa region of Kyushu by order of Emperor Kimmei (509-571), at the site of the Usa Hachiman Shrine (the earliest shrine in Japan dedicated to the deity Hachiman) to pray for peace and abundant harvests. Hachiman is a popular deity who protects warriors and generally looks after the wellbeing of the community. The first recorded yabusame performance was in 1096, for the retired Emperor Shirakawa.

Today, this spectacular ritual is performed at famous shrines such as the Tsurugaoka Hachiman Shrine in Kamakura and the Meiji Shrine, Tokyo. These contests attract thousands of spectators, who come to marvel at the sight of mounted archers in sumptuous costumes firing arrows at stationary targets while charging at full gallop. Curiously, it is also performed in the tiny village of Togouchi in the Chugoku Mountains of Hiroshima Prefecture. This event dates back to 1439 in the Muromachi Era and was revived in 1991 after a long absence. It’s now held annually on the first Sunday of October and is the only yabusame contest still held in Hiroshima Prefecture. Driving up through magnificent forest-clad mountains towards Togouchi, following the majestically broad Ota River, one can’t help noticing a series of peculiar scarecrow-like figures lolling about the landscape. The mannequins take the form of solitary men fishing from bridges, couples leaning against a railing, whole families in the fields, some dressed in kimono or peasant costumes, others in jeans, but what could be the purpose of these silent spectators?

Just outside Togouchi, colourful flags and bright banners flap on tall bamboo poles, announcing the yabusame event. However, the riverside riding track is still empty except for a long line of tripods left there by photographers to reserve the best spots.

One of the few people still hanging around is an old-timer with a weather-beaten face sitting under a big straw hat, and it turns out he’s quite a yabusame veteran. He’s been to “the big one” in Kyushu and recommends another popular contest down in Tsuwano in neighbouring Yamaguchi prefecture that is held at “around cherry blossom time”. “Everybody is up at the shrine,” he says, nodding toward the hill over the road. “For the ceremony. You should go to see it”. Togouchi’s Hori Hachiman Shrine dates from 1715 and is one of 25,000 Hachiman shrines in Japan. It’s shaded by several towering cedars, each looking like they’ve been there since Amaterasu left her cave in Japan’s Shinto creation myth. Inside, a score of elders chant and bang drums for what seems like forever. The chanting, the doleful drumbeats and the creaking of the bamboo flagpoles are the only sounds to ruffle this sun-dappled morning.

Outside, ranks of photographers wait patiently and the atmosphere is relaxed and friendly. It’s hard to imagine anything less like the teeming yabusame events in Tokyo and Kamakura. Up here among the ancient trees, the Shinto kami loom closer and the ceremony’s ancient roots feel almost palpable. At length, a white horse appears, led by a young boy wearing a traditional happi jacket and holding a plastic bag and shovel to clean up behind the animal. Immediately, a new sound follows: the rapid chatter of dozens of cameras set on continuous shooting mode.

A rider, tall, strong and resplendent in his silken robes, emerges from the shrine and mounts the steed. He’s Okazaki Susumu, the reigning champion. A priest comes out, blesses him and the horse by waving a haraegushi wand over them, and then ties a white prayer paper to the horse’s mane. Another rider joins the group: Aoshiba Toshie, a woman of archetypal jockey build – no more than half the size of Okazaki. These two riders are the sole competitors and they will take turns to ride the solitary white steed. Their magnificent costumes, right down to the fur riding shoes and furcovered scabbard, hint at the antiquity of the art. Now comes a pivotal yabusame moment as the champion places an arrow in his bow and pulls the bowstring taut. With a folded prayer paper clenched between his teeth, he ceremoniously aims his arrow at the ground, then at the sky to symbolize harmony between Heaven and Earth, before firing the arrow off into the distant forest canopy. Enthusiastic applause ensues.

Finally, the Shinto elders come down the steps from the shrine in their splendid gold robes and black pointed hats, some in tortoise-shell-shaped helmets. The leader wears a red tengu mask, halfman half-bird, with tufts of grey hair, a huge red nose and grotesque face. A group of strong-armed firemen carry a shrine palanquin (mikoshi) down the steep steps leading to the main road and off they all go. This sparks a veritable charge of the camera brigade.

The procession make quite a spectacle, parading down the side of the busy highway: the champion on the horse, the taiko drummer playing from the back of an open truck, the priests and everyone else following on foot, including a flute-player, playing while he walks, as red-cheeked village kids in turquoise happi pull the shrine on a trolley. The photographers trot backwards trying to keep a few steps in front of the procession to get a good shot. Finally the group arrives on the banks of the river, where mountains – the domain of bear and boar – reach right down to the 140-metre riding track. A sweet smoky tang wafts up from a stall where rice cakes are roasting over an open flame. Near the starting line another ceremony takes place at a small altar inside a roped-off square. A priest makes offerings of sake and rice cakes, then blesses the archers again. The weather is a perfect mix of sun and cloud – “not hot and not cold” as the MC observes in his preamble – a golden autumn day. At last the contest begins. The champion’s first shot shatters the wooden target with a resounding “thwack”, to huge. applause. The female rider fails to hit on her first run, but is also warmly applauded for the speed of her gallop. After each round the targets are presented to the judges for inspection. Both riders take turns shooting at three 60 sq. cm targets, about sixty-three metres apart and two metres to the left of the track along which the riders gallop. Statistics aside, it’s uncanny how they manage to charge full-tilt while their arms are raised shoulder-high to fire the arrow.

The actual yabusame lasts just thirty minutes, after which it’s back up to the shrine for closing formalities. Onlookers congratulate the archers on their amazing riding skills. With typical Japanese modesty, Ms. Aoshiba laughs it off. “I’ve been doing yabusame for four years, but I get so few opportunities to practise from one year to next that I never get much better!” she says. As so often happens in Japan, people go home quickly once the event is over, leaving little evidence that anything ever happened here, with the one conspicuous exception of the shrine palanquin. All the firemen are elsewhere, taking down the banners and dismantling the targets, so the shrine elders need help carrying the mikoshi back up the steps to the shrine building. It’s far heavier than it looks, but the sacred palanquin and the deity within it are soon put away safely inside the shrine for another year. With the work all done, it seems like a good moment to ask about those scarecrow figures that dot the countryside. It transpires that they are nothing to do with keeping birds away. With the increasing depopulation of the countryside, the lady who runs the snack stall explains that villages are becoming emptier. These lifelike human dolls help make the place seem less lonely. It’s a question of preserving that vital human connection.

How To get there
From Hiroshima railway station, take the jR Kabe line to Kabe. From there you will need to catch a bus that will take you to the Togouchi IC Bus Centre – around an hour’s journey. Then it takes about ten minutes to reach the village.