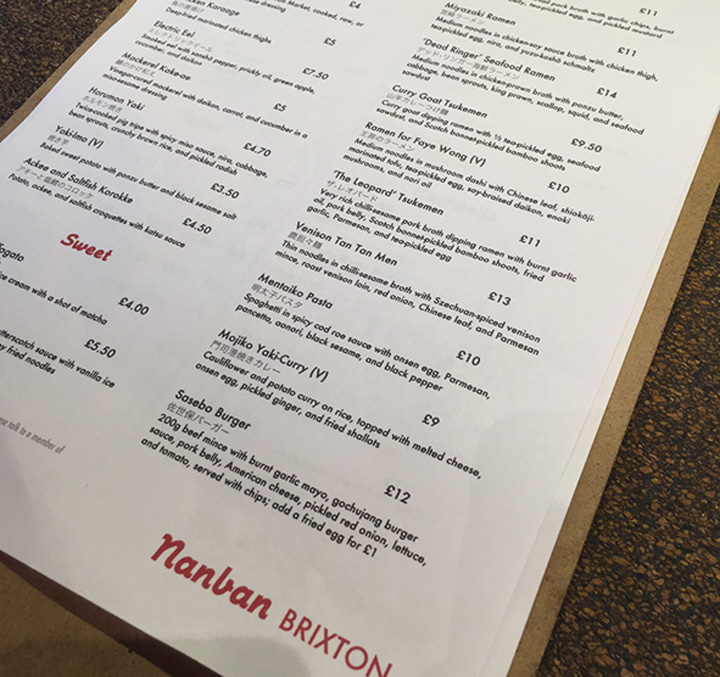 Since it opened last September, Nanban has offered a unique culinary experience to awaken all our senses.

Nanban is what the Japanese called the “southern barbarians”, westerners who came to the archipelago in the 16th century looking for the treasures that Marco Polo told them could be found there and who, at the same time, wanted to convert the country to Christianity. Nanban also refers to an artistic style born out of the European influence on Japanese art, a sort of artistic fusion that can be observed in some of the works held at places like the Nanban Bunkakan in Osaka or at the Municipal Museum in Kobe. But Nanban is also a new gourmet venue in Brixton, aptly named since the key concept for the owner is fusion food. The American Tim Anderson has, in effect, chosen to create a venue where several different influences are combined. This is not limited to the food, but also to the setting, where these delicious and original dishes are served. Deciding to change the original 1921 exterior of the restaurant as little as possible – the only additions are the words “ramen” and “izakaya” written in katakana and hiragana – meaning that a passer by may not immediately be drawn to the place and walk right past without taking the time to have a peak inside. For the interior design, Tim Anderson adopted a fusion look, where the spirit of the typical Japanese ramen restaurant is combined with the atmosphere of a New York bar with exposed brick walls. The choice is, of course, very deliberate and consistent, as the chef, a winner of Master Chef, wanted to create a hybrid effect different from the many Japanese restaurants that rely on faux Japanese decoration. The chef goes even further with a cuisine that respects the founding rules of Japanese gastronomy. He adds his own personal touch, highlighting dishes that would be nothing special in other restaurants. The care given to the presentation is a sure sign of Tim Anderson’s dedication to serving a cuisine that will awaken all your senses, with the first of these being sight. Before even tasting the food, you’ll be devouring the dish with your eyes, a great way to start the meal, especially when the staff, smiling and attentive, offer the patrons the different menus as soon as they are seated. Going through the menu is easy, as there are only a dozen dishes. The concept is to change the menu every month to follow the changing seasons, making sure not to fall into a routine and continually surprise curious customers with new dishes to discover. Tim Anderson has been influenced by his trips to Japan, and in particular his keen interest in Kyushu Island, where the “southern barbarians” first disembarked, and has created a menu inspired by this beautiful region. His Kumamoto ramen (£11) or his Miyazaki ramen (£11) are really worth trying, as well as his Sasebo Burger (£12). This last dish is a reminder that Sasebo, an American Navy base, has a number of excellent burger restaurants with a Japanese twist. Nanban is a delightful place where you can enjoy excellent Japanese and British beers. With the concept of fusion at every level, Nanban is a name that suits this venue down to the ground. However, there is nothing barbarous about it. It’s a work of art.