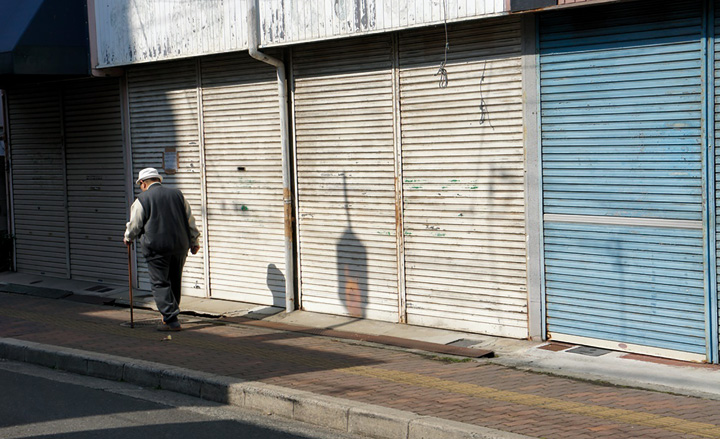 Though there are numerous indications that the situation in the Japan’s provincial regions is worsening, there are still signs of resistance.

When travelling through the streets of certain Japanese provincial cities, one is overcome with a feeling of sadness. Last year we regrettably noted how Kurayoshi in Tottori Prefecture, home of the mangaka Taniguchi Jiro (see Zoom Japan no.47, February 2015), was a city in decline, with an increasingly ageing population and a struggling economy, despite the defiant efforts of some of the people there. We were forced to conclude that it no longer resembled the city described by Taniguchi in his classic work “A Distant Neighbourhood”. Even the fading electoral posters for the Liberal Democrat Party proclaimed “A return to the Japan of old”, referring to a country full of energy. However, despite this gloomy atmosphere, a part of the local population do not want to just roll over and wait for their region to die slowly. There’s no question of their waiting for the government and the local authorities to finally take the bull by the horns, so they have to take the initiative themselves. Admittedly, there is parliamentary talk in favour of regional regeneration, and the minister in charge of this brief, Ishiba Shigeru, is himself originally from Tottori. However, everyone is well aware that the government’s promises are unlikely to be worth much, and it is not sufficient just to declare the end of decline to stop its disastrous progress. What is necessary is to dig down deep and come up with resources to put a stop to the situation, while at the same time re-energizing the local economy. In the neighbouring prefecture of Shimane, local decline is also a very serious issue. Some people have decided to take action in order to attract new migration or to find ways of boosting the local economy.

As in other areas of the country, Shimane is confronting a rapidly ageing population. Based on a 2014 opinion poll carried out by the Prime Minister’s Office, according to which 46.7% of 18 to 19 year olds hope to leave the cities in the future and return to the countryside, the authorities in Gotsu, one of the prefecture’s larger cities, decided to take action. Over the last ten years, this city of 25,000 inhabitants has lost 10% of its population. In addition, the education department has come up with a scheme they call “Mag turn” (Return of the Grandchildren), which involves encouraging parents living in large cities outside the prefecture to entrust their children to their grandparents residing in Gotsu, so they can grow up in nicer surroundings. This idea offers an appealing and original approach to the problem. The same attitude lies behind Matsuba Tomi’s efforts to avoid the slow death of the village of Omoricho (411 inhabitants), to which she relocated and set up a business called Gungendo. The aim of the business is to promote local artisans and attract tourists in search of authentic craftwork, and thus consequently reinvigorate the village. To “turn old into new”, is the philosophy of this woman who has, in turn, inspired others across the archipelago. Today, it’s obvious that one of the best ways of overcoming decline is by building on the wealth of local talent that Japan possesses; it only needs to learn how to make the most of that amazing resource.