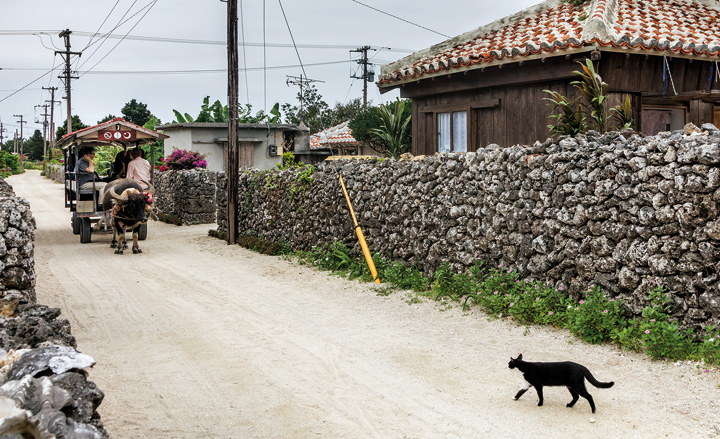 Situated in the extreme south of Japan, this little island has found a way to control the growth of its tourism successfully.

A glimpse of paradise is the first impression you get when you set foot on Okinawan soil, especially if your first point of contact is Ishigaki, at the southern tip of the Ryukyu archipelago. On Naha, Okinawa’s main island (honto), the atmosphere is quite different though. The airport is situated on the edge of the main city in this vast territory made up of four distinct island chains: the Okinawa archipelago, the Kerama archipelago, the Daito archipelago and the Sakishima archipelago. Situated just thirty minutes away from Taiwan, the last one is a collection of islands whose names are synonymous with the dreams of visitors wanting to take a break from their oppressive daily lives in the city. The Miyako islands and the Yaeyama islands offer the promise of enchanted moments for all those visiting from Tokyo, Osaka or even Taipei, and the modernization of Ishigaki Airport has drastically increased the number of tourists who come to the islands in search of sun, heavenly beaches and authenticity. Unlike Okinawa Island, where concrete has disfigured the landscape, the Yaeyama islands have largely escaped the hideous resort hotels and other trappings of mass tourism that spoil local communities, with the one notable exception of Ishigaki itself.

The presence of the airport has undoubtedly contributed to accelerating the transformation of Ishigaki, which has progressively lost its identity and started to look like any other provincial Japanese city, with a concrete city-centre and gloomy shopping streets (shotengai). Ishigaki is also home to a front-line military base that has grown in importance over the past two years with the increase in tension between China and Japan relating to the Senkaku islands (Diaoyu, for the Chinese), which are considered as Japanese sovereign territory and part of the Sakishima archipelago. The coastguard installations on Ishimaki will soon be joined by commando barracks, all of which contribute to the city’s military feel, reinforced by its numerous grey buildings. Even if you don’t come across soldiers or army vehicles, signs boasting about the merits of the self-defence forces make the city less attractive than the little surrounding islands. As you have to pass through Ishigaki before boarding one of the many boats that transport you to these little bits of heaven, it’s a good idea to stop a while to eat something. The city may lack architectural charm, but is certainly not lacking terms of its gastronomy. A multitude of little restaurants offer local specialties in a typical Okinawan atmosphere. One of the major characteristics of traditional Okinawan establishments like these is the omnipresence of the sanshin, a three stringed instrument that resembles a shamisen, but with a snake-skin covering. Most songs are about the locals’ love for their islands, and the rhythms are catchier than those of classic shamisen melodies. There are many restaurants situated within a radius of about a hundred metres around the port terminal, including Corner’s Grill (phone 0980-82-8050, http://cornersgrill. com). Situated almost opposite the town hall, this little establishment serves Ishigaki beefbased dishes, the pride of the locals and a real treat for meat lovers, between 11am and 5.30pm. The avocado burger (abokado chizu hanbigu suteku, 2,180 yen) is also delicious.

Another restaurant known for the quality of its meat is Kitauchi bokujo (phone 0980-84-2929), that also serves delicious local beers, such as kuro biru (brown beer), made in Ishigaki, which perfectly complements the meat -based menu. There are also several soba restaurants, such as Masando (phone 0980- 83-4050, 11am – 9 pm), where the region’s vegetable based shimayasai soba (980 yen) is quite marvellous. Local young people frequent the restaurant; the atmosphere is friendly and the walls are decorated with business cards from visitors from all over the world, who have come to try the delicious noodles on offer here. If you do visit then we challenge you to find Zoom Japan’s card! Once you’ve eaten your fill, it’s time to embark on the boat journey to paradise. The port terminal just a hundred metres away is a nerve centre from where you can gain access to the Yaeyama islands (Taketomi, Kohama, Iriomote, Hateruma and Yonaguni). Taketomi, just a fifteen minute boat ride away, is a truly heavenly place, but its inhabitants know this and want to preserve it from the bad effects of tourism. The island’s authorities are also well aware that their island’s sustainability relies on tourism, as its other main income stream from sugar cane cultivation is now threatened by imports. The Trans-Pacific Partnership signed last autumn by the United States of America and eleven countries of the Asia-Pacific region, a freetrade agreement to which the local farmers were opposed, confirmed their analysis of the economic situation on their island. However, there is no reason to sacrifice everything for tourism, especially if it endangers the identity and lifestyle of this island, which has no shops or other means to help preserve its habits and customs. The first place to visit after you arrive on the island of Taketomi is Takidun, an enterprise created with the goal of spreading information on the history and traditions of the island and to fight the “colonization” by the tourist trade, which would like to impose a faster pace of life here. It’s for that reason that the inhabitants of Taketomi agreed to Hoshino Resorts Group building a very special hotel complex on the island: the HOSHINOYA Taketomijima. The Hoshinoya is classified as one of the groups top-end hotels, aimed at a clientele who demand the highest standards of comfort, but at the same time tries to be in harmony with its surroundings. Hoshino Yoshiharu, the CEO of the rapidly expanding group, adopted this philosophy as a central part of his development strategy. “Up until now, Japan’s regions all wanted to resemble Tokyo. But in doing this they ended up destroying their local culture, including their dialects,” he says regretfully. That’s why his mission is to foster the kind of tourism that integrates perfectly with the locality and respects traditions.

Hoshino is convinced that the new generation of tourists is looking for authenticity. His experience and success in other regions of Japan allowed him to convince the inhabitants of Taketomi to agree to the construction of something that resembles a village rather than a hotel complex. Other than the wish to respect the environment, the main objective of this initiative is to encourage its clientele to take part in the traditional day to day life of the island, and to leave all the inconveniences of their modern lifestyle behind them. Built close to the sea, all 48 “villas” of the HOSHINOYA Taketomijima respect the architecture of the region, including the gukku (coral) walls that protect the buildings from wind, the hinpun, a little wall placed at the entrance of every house to prevent bad spirits from entering and the shiisa, little half-lion, half-dog sculptures that can be found on the roofs of houses and act as guardian spirits. Hoshinoya’s sandy streets are maintained in the same way as those in the local village, so the tourists can immerse themselves in the local atmosphere. Most of the activities on offer also aim to promote local traditions, whether in terms of food or cultural activities. Visitors are also invited to discover Taketomi on a trip in a cart pulled by a buffalo, during which the driver narrates the history of the village and sings while playing his sanshin, filling the silent streets with sound. But don’t go thinking that the silence is synonymous with boredom, and that Taketomi is just a empty space in the extreme south of Japan. The island’s 320 inhabitants know very well how to make a noise, and organize as many as twenty matsuri (see Zoom Japan no.52, July 2015) every year. The most famous, Tanadoui, takes place in October over ten days, and everybody takes part. Its fame has spread beyond the island and attracts many visitors, including celebrities who want to take part in the joyful local traditions. This desire to share can also be found at the Taketomi Mingeikan, a little museum in which you can discover and learn about traditional minsa weaving techniques with Shimanaka Yumiko, an exponent of this craft that adorns the belts of kimonos made in Ishigako. The term is derived from the word “mensa”, designating a small strip of cotton. Taketomi’s minsa making dates back to the 17th century and the garments were originally woven by women and given to suitors in response to proposals of marriage. The traditional design featured a set of 5 small rectangles and another set of 4, the pronunciation of these two numbers together, “itsu no yo”, imitating the sound of a promise to love the man forever.

To avoid losing this weaving tradition, the inhabitants regularly meet at the museum-workshop to handmake objects decorated with the motif, and some of them are kept in Hoshinoya to preserve local know-how. For the same reason, local musicians come to the museum every day to play local folk music with their sanshin. There is something to please everyone in Taketomi, and the inhabitants benefit economically from tourism without having to suffer its negative effects. For their part, the visitors have the pleasure of discovering an enchanting and well-preserved location that’s happy to share its warmth and culture. The sense of hospitality – omontenashi – is a great quality of the Japanese, but in Taketomi it’s taken one step further because you never feel like a stranger there. It’s a wonderful feeling that contributes to making any stay here really enjoyable. You may even end up forgetting about the beautiful whitesand Kondoi beach to the west of the island, in order to continue wandering around the charming village, whether by bike or on foot. Various little cafes and restaurants offer a taste of Okinawa cuisine, such as noodles at Takenoko or the beer at the Asahi Garden or Taruriya. If you’re lucky enough to be there in fine weather, don’t miss going to Nishisanbashi to see the wonderful sunset. When it’s time to go, you’ll regret having to leave this magical island paradise, but will probably be planning on coming back very soon!

HOW TO GET THERE
FROM TOKYO OR OTHER BIG CITIES IN JAPAN:

There are several daily flights to Ishigaki airport, taking just over three hours, and then it’s another twenty minutes to the port terminal. from there, catch the ferry to Taketomi (1,000 yen).
HOSHINOYA Taketomijima has its own bus service from the port.
To make a reservation, call 050-3786-0066 (8am – 9pm, service available in english), or go directly to the website.
http://hoshinoyataketomijima.com/en/