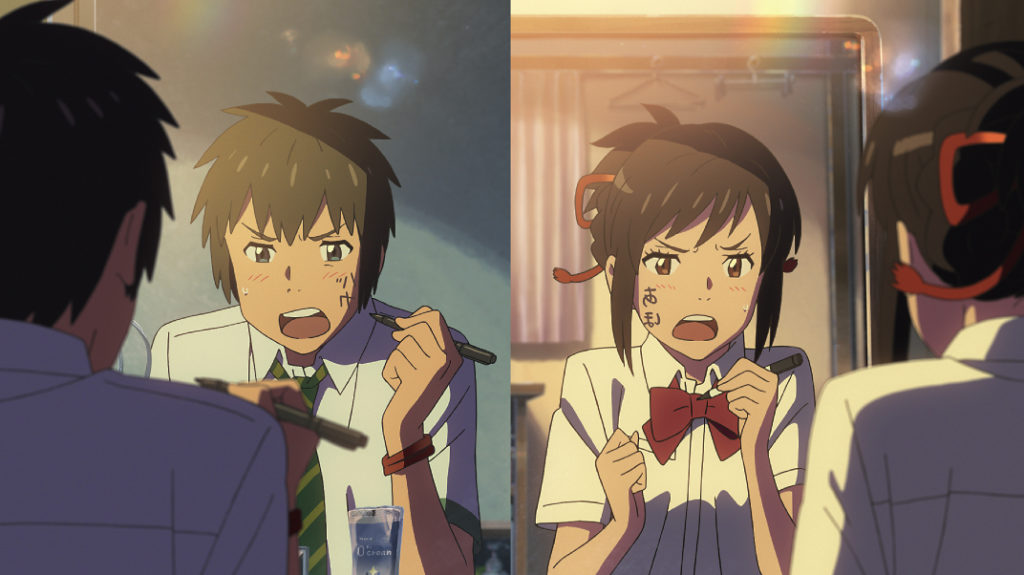 Taki and Mitsuha are the two main characters in Shinkai Makoto’s latest feature film, which broke all records in Japan.

This November, British audiences were able to discover “Your Name”, the film phenomenon by Shinkai Makoto.

For weeks, no-one has spoken of anything else. Shinkai Makoto is making headlines and has come to the attention of many television channels. The director of Your Name has become a familiar name to millions of Japanese in the space of a few weeks, previously only being known among dedicated anime aficionados. Those aficionados however, will have seen The Place Promised in Our Early Days (Kumo no muko, yakusoku no basho, 2004), 5 Centimeters per Second (Byosoku 5 senchimetoru, 2007) or the sublime The Garden of Words (Kotonoha no niwa, 2013), and already recognized that that Shinkai Makoto is a great film director in the mould of Miyazaki Hayao. As the cofounder of Ghibli studio, which is celebrating its thirtieth anniversary this year, Shinkai had seemed to have definitively moved on to well-deserved retirement, and there were many who were impatient to learn who would take on the mantle of figurehead for Made in Japan animation. Hosa Mamoru, who almost joined the team at Ghibli himself, was a favourite for a very long time until Shinkai Makoto came on to the scene with Your Name, which the general public and critics alike have praised profusely. Box office numbers are enough to convince anyone of his success. After 13 weeks on release, the film still ranks amongst the top entries with a combined audience totalling 1.5 million and takings of 18.9 billion yen. It only took this film four weeks to break the previous takings record of 10 billion yen, itself a feat previously only achieved by Miyazaki Hayao.

After hailing Shinkai Makoto as the new Miyazaki, many did not hesitate to take the next step. Yet, apart from the enthusiasm and the economic success of Your Name, it might still be too soon to talk of both directors in the same breath, as their styles are so different. Though Shinkai might not hide his admiration for the director of Castle in the Sky (Tenku no Shiro Rapyuta, 1986), he always says that he never tried to mimic his illustrious predecessor. So much the better! Whereas Miyazaki takes on the role of a critical observer of Japanese society with a somewhat paternalistic perspective, the author behind Your Name is content to relate the emotions of his characters, crafting an extraordinarily close relationship with the audience who cannot help being enticed by this approach. This does not stop him from taking an interest in the Japan of today and describing how it is; with the immense megalopolis that is Tokyo, drawing in people from all across the country on the one hand and the Japanese countryside with its small towns where nothing much ever happens on the other. The description by the young heroes of their imaginary but very typical small town of Itomori is very amusing.

Nor does Shinkai forget to place his vision of Japan in the context of a country that’s subjected to the whims of mother nature, although in this film it is not about earthquakes, but a meteorite. Just as in real life, Shinkai Makoto demonstrates the ability of the Japanese to stand firm in the face of tragedies, and he does it with great subtlety and amazing skill. Undoubtedly the praise received by Your Name from the Japanese audiences can be explained by the attention to detail in the depiction of the landscape. It’s well known that many Japanese are protective of the environment they see around them, and that they are very upset when it disappears or is transformed by the onslaughts of nature. In this sense, Your Name has made a name for itself as one of the first successful releases following the events of March 2011, and there’s no secret to the reason why Japanese viewers could not resist its attraction. Behind this simple boy meets girl story – what could be more commonplace? – Shinkai Makoto has built a masterpiece of incredible richness. Enough to make anyone jealous, even someone like Miyazaki, who’s just announced he will probably return to directing…