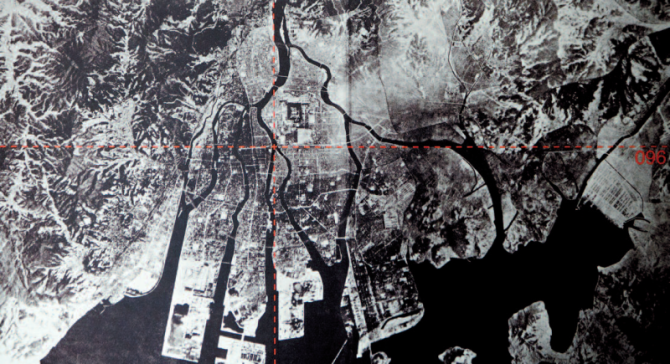 On the 6th of August 1945 at 8.15am, Hiroshima was the target for the first atomic bomb attack in history. Three days later, it was Nagasaki’s turn.

Hayashida Mitsuhiro has decided to fight to keep alive the memory of the atomic bomb victims.

For many years, the long-running campaign to ban nuclear weapons in Japan has been the almost exclusive domain of atomic bomb survivors. However, as most of these people are now too old to continue their activities, they urgently need to pass the baton to a younger generation. Among that new generation is Hayashida Mitsuhiro, a Nagasaki-born student who has been particularly active in trying to connect young and old activists.
Currently a post-graduate student at Meiji Gakuin University in Yokohama, Hayashida is devoting his research to the postwar life of the atomic bomb victims (hibakusha in Japanese) and their memories. “Many survivors have not been recognized as victims,” Hayashida points out. “Some of them have kept their condition secret in order to avoid being ostracized by their community. In other cases, many people were not directly exposed to radiation but became sick anyway after eating infected vegetables and other food”.
Born in Nagasaki almost 25 years ago, Hayashida has grown up surrounded by people who experienced that fatal day in August 1945, so in a sense the issues surrounding nuclear weapons and the atomic bomb victims have always been part of his life. “The building where I attended both elementary and junior high school had already been built in 1945,” Hayashida says. “Strangely enough, Japanese students don’t have many chances to study the atomic bombings (even in the history textbooks they are only briefly mentioned), but Hiroshima and Nagasaki are obviously an exception. For example, although most schools are closed in August for the summer holidays, August the 9th is a regular school day in Nagasaki. At my school in particular, we often had what are called Peace Study seminars. That’s when I first got interested in the subject. Then, when I was 14, I joined an annual campaign to send an anti-nuclear weapons appeal to the United Nations, and I continued doing so until I finished high school”.
Among the people who influenced Hayashida was his paternal grandfather, who directly experienced the atomic bombing, and especially its aftermath. “My granddad was in junior high school at the time and like all the kids his age he was assigned to work at the local shipyard in order to help the war effort,” Hayashida remembers. “Although he was at home in the suburbs when the bomb was dropped on Nagasaki on August the 9th, and, quite by chance, avoided being directly exposed to radiation. It was only the day after that he was called to the city centre to help”.
For many years Hayashida’s grandfather refused to talk about that experience, and he shared his memories with his grandson only once, but what he said was enough to leave a vivid impression on the young boy. “He was assigned to distributing food, so he came in direct contact with the survivors,” Hayashida says. “He told me that among the people who were lining up there were many who had lost all the skin on their faces. Then he saw a woman who was carrying her child on her back without realizing that he was dead. That was the only story I heard directly from him. He clearly wanted to forget it all, and never said what he felt during those days”. 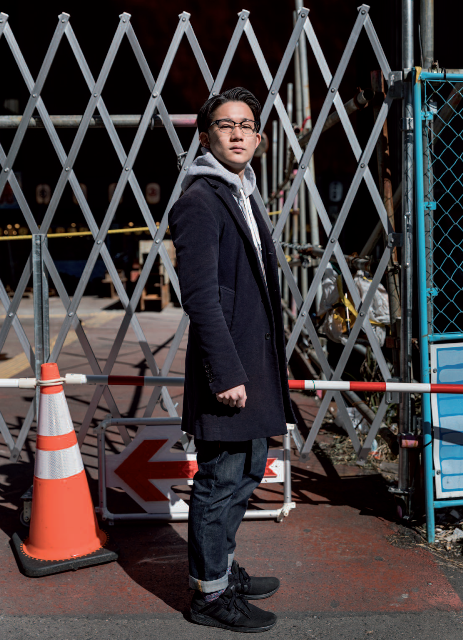 Hayashida is currently organizing the International Hibakusha Appeal, a campaign calling for an international treaty to ban and eliminate nuclear weapons. “These appeals have been around since the end of the war, but in most cases the people behind these campaigns were not hibakusha. Also, for a number of reasons these people have always been divided by ideological differences, which have resulted in a fragmented anti-nuclear front,” he says. “But recently I was approached by some of the older activists who wanted to go beyond the old divisions as well as inject new blood into their initiatives, especially after seeing what student groups such as SEALDs (Students Emergency Action for Liberal Democracy-s) had achieved in the last couple of years.
According to Hayashida, one of the goals of the Hibakusha Appeal is to create a new, inclusive approach to connect all kinds of people from across the political, ideological, religious and age divide. “I’ve always found it a pity that so much energy was being wasted fighting with each other,” he says. “The first problems emerged in 1955, during the Cold War, when a key group split over differences about whether or not to back the Soviet Union’s nuclear testing. Each group struck an alliance with a different political party and fell under its particular influence. Since then, there have been two major anti-nuclear organizations, but they have mostly avoided working together towards a common goal”.
At times this situation has almost comical consequences. “Nagasaki is a rather small city, and there is only one big assembly hall,” Hayashida says. ”So when these two groups hold a big gathering on the same day, one of them reserves the first floor and the other one the second, and they look so similar that many people who are invited to participate can’t tell the difference and end up in the wrong place (laughs). I’ve known about this situation for many years and respect what they’ve done over the past decades, but I can’t really understand these ongoing divisions”. Ideological differences aside, one of the most urgent problems is how to continue the antinuclear weapons campaign now that most hibakusha are well into their 80s and their number is rapidly dwindling. “For many years there has been the belief that only the victims themselves had the right to tell their own stories,” Hayashida says. “This, of course, creates a big problem because of their age. In my opinion we should follow the example of the holocaust, where the people who personally experienced the extermination camps passed their memories down to younger people, who have learned and internalized those stories and are now acting on their behalf. That’s what I’m trying to do now in Japan, by spreading the hibakusha’s stories as much as possible among high school and college students”. 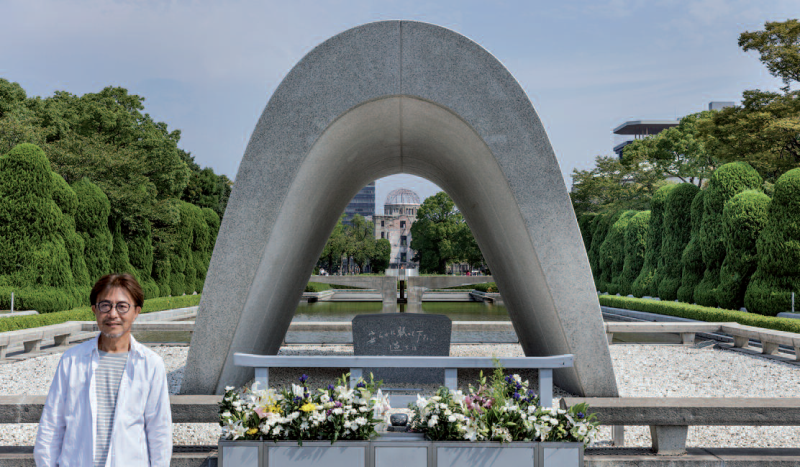 Designed by architect Tange Kenzo, the Hiroshima cenotaph was erected on an axis in line with the Atomic Bomb Dome, one of the very few buildings that survived the force of the nuclear blast.

Hayashida was also one of the founding members of SEALDs, the student organization that campaigned against the security laws recently enacted by the Japanese government between 2015 and 2016. He believes that SEALDs’ actions have many things in common with the anti-nuclear weapons movement. “For me, the main purpose of all these campaigns is to regain human dignity,” he says. “With SEALDs, it was a matter of defending democratic values and personal freedom. In the same way, hibakusha don’t want to be seen only as atomic bomb victims, but as human beings. Ultimately, both campaigns are about defending human rights”.
Even though SEALDs disbanded last August, following the ruling Liberal Democratic Party’s victory in the Upper House election, Hayashida believes they greatly contributed to changing young people’s attitudes toward political and social issues and the way they are seen by the older generation. “To be honest, everything started very spontaneously, and in the beginning we didn’t really know what we were doing,” he says, “but we quickly realized that even a group as small as SEALDs could grab everybody’s attention and encourage many people to take action. We were able to establish a lot of connections with the media, politicians and other famous people (e.g. musician Sakamoto Ryuichi), which will come in handy for future campaigns. In any case, the SEALDs experience may be over, but we are far from done, because even in the short term we didn’t obtain the results we hoped for. Probably one of the best things about SEALDs was that we were able to give a new image to old-style, rather dusty left-wing activism. We came up with new ways to present our ideas (e.g. new flyer designs) that would appeal to different groups, like women and students, who for many years have been indifferent to social protest”.

No53 [Book] Tokyo, the capital of pop culture