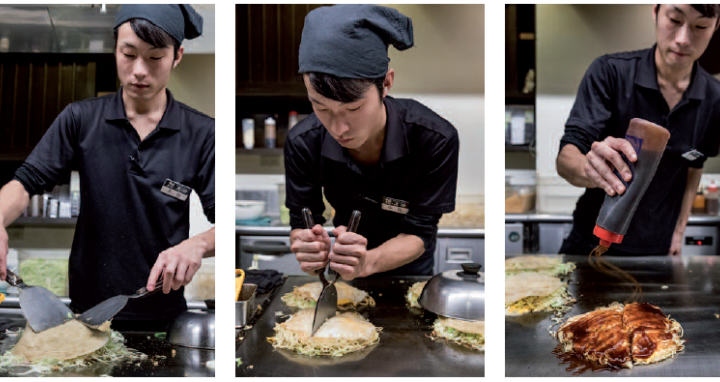 Making okonomiyaki may appear simple, but it requires several years of experience.

The Hiroshima region is noted for its wealth of gastronomic riches, with something to please everyone.

As with most other regions in Japan, no food lover can rightly ignore Hiroshima prefecture’s gastronomic culture. There is something to please all tastes, but the dish that perhaps best characterizes this region is okonomiyaki. The word literally means “everything you love grilled”. In other words, no one can dislike okonomiyaki because it contains all your favourite ingredients by definition! The basic recipe is simple, it starts as a kind of pancake batter that you spread out to cook on a hot-plate. Then, it’s time for the customer to choose ingredients to add, which are cooked for a few minutes under the chef’s watchful eye. It appears so simple that some restaurants offer their customers the opportunity of preparing their okonomiyaki themselves, on a hot-plate set up on individual tables. This can be a pleasant shared experience, but there’s no guarantee that amateur cooks will manage to equal the standard of some of the specialists who have the knowledge and skill to control the cooking temperature perfectly. Especially as the time and heat required can vary depending on the ingredients chosen. So it’s recommended that you sit at the counter and observe how carefully the chef prepares the okonomiyaki you’ll be eating.
To understand why this dish occupies such an important place in the gastronomic culture of Hiroshima, we must go back to the period following the end of the Second World War. Before the conflict, pancakes were enjoyed as a snack throughout the city, especially by children. After the country’s defeat, many mothers, anxious to make ends meet at the end of the month, had the idea of starting pancake stalls, but with the addition of ingredients they had to hand at the time. By adding oysters (another local specialty), soba noodles and squid, they created a nourishing dish whose taste varied wonderfully depending on what the individual vendor put in, and all for a very modest price. The dish soon became popular with the locals, but it became even more popular when the Otafuku company made a sauce specially formulated for okonomiyaki in order to add flavour. It was in 1952, when the country was freed from the American occupation, that Otafuku started to market their winning formula, with a texture thick enough not to be absorbed immediately by the batter, and a flavour just strong enough to accent the whole dish. The balance is so close to perfection that even professional chefs won’t hesitate to cover their dishes with this sauce. The original recipe is so successful that Otafuku has been producing more than 250,000 bottles a day. There’s a lot at stake for them hanging on the continued popularity of okonomiyaki, so much so that the company has continued to promote Hiroshima’s best known speciality. In 2008 they even opened the Okonomiyaki Museum (7-4-5 Shoko Center, Nishi-ku, Hiroshima 733-0833, entry: 1,000 yen) designed by the architect Sambuichi Hiroshi, who gave it an egglike shape to echo the A-bomb Dome, a surviving remnant of the atomic bombardment of the 6th of August 1945. Besides the history of this dish, one can also learn how to cook it at the the museum thanks to beginners classes, which need to be booked in advance. After a visit to the museum it is highly unusual not to be tempted by a detour to a nearby restaurant to enjoy a dish prepared by a skilled professional, especially as every restaurant specializing in okonomiyaki offers you its own variation of the dish. There is far more to this dish than just a common or garden pancake covered with cabbage or fried noodles with a large dollop of brown sauce on top.
However, Hiroshima style cuisine is far more than just okonomiyaki, however popular it has become throughout the the whole archipelago, and the other local speciality is the oyster. They can be found in other regions such as Tohoku in the northeast, but Hiroshima oysters are the most famous. They can be prepared in a myriad of different ways, offering great variety to the seafood aficionado. On the island of Miyajima, twinned with Mont Saint-Michel (France), you can either have them grilled or eat them fresh with a drizzle of vinegar. In Hiroshima city itself, some restaurants offer kakino- dotenabe, a tasty oyster casserole with miso. There are too many restaurants to list here, but if we have to recommend just one, then it must be Toyomarusuisan (Man Reed building 2F, 7-24, Hondori, Naka-ku, Hiroshima, 730- 0035, open daily from 16.00). The relaxed atmosphere is similar to what you’ll find in the best izakaya, and the chef cooks the oysters to perfection. From haki nabe (oyster stew) to kaki to shiro hamaguri no gangan mushi (steamed oysters and clams in sake), and the classic kaki furai (oysters fried in breadcrumbs), each dish is prepared with care. 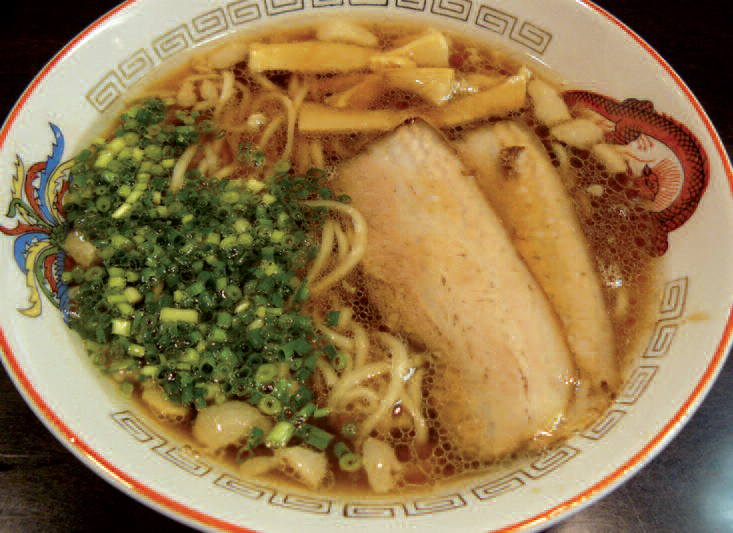 You must not leave Onomichi without tasting the ramen.

Hiroshima’s proximity to the Inland Sea explains why seafood of all kinds is central to the local diet. In Mihara, a harbour located between Hiroshima and Onomichi, it is tako (octopus) that takes pride of place. About thirty minutes by train from the city of Hiroshima, it would be madness not to take a trip to taste their famous octopus known locally for its unique texture. Even if you came across this city by chance while on your travels, you’d soon realize that the octopus is the symbol of Mihara. As soon as you leave the train, you’ll notice it appears everywhere, as part of the decor and on statues and flags. The best times to enjoy octopus cuisine are from June to August and from November to March. One can, of course, eat octopus in the traditional way as sashimi or tempura, but Mihara’s outstanding and original ways of preparing this dish are well worth a detour for. These include the famous tako pie (cake with an octopus filling) and takosen (rice biscuits with octopus), which are made by Ebisuya and sold in their shop (1-6-2, Shiromachi, Mihara 723-0014, from 08.00 to 19.30) located a hundred metres or so from the station. Octopus is also a great gift idea to bring back to Europe, as these two products make a refreshing change from the Green Tea KitKat that most typical tourists brings back from their stay in Japan.
However, not all the good things that you can taste in the region of Hiroshima can be taken back home so easily, as in the case with the famous ramen (noodles cooked in broth) from Onomichi. This city, which filmmaker Ozu Yasujiro made famous thanks to his film Tokyo Story (Tokyo Monogatari, 1953), is also well known for its noodles. Few cities in Japan have succeeded in having their names associated with ramen, but Onomichi managed it thanks, in particular, to the use of fish paste and the “rings” of melted bacon that appear on the surface of the broth served with the noodles. One of the most popular places to eat is Shukaen (4-12 Toyohi Motomachi, Onomichi 722-0034, 11.00 – 19.00, closed on Thursdays and the third Wednesday of the month). You have to be patient if you want to taste the ramen from Shu-san, as the locals affectionately call this restaurant, where it’s not uncommon to see a long queue forming in front of the door. The most impatient or the hungriest can find equally good restaurants in the city, but they lack Shukaen’s long history, as it celebrates its 70th anniversary this year. 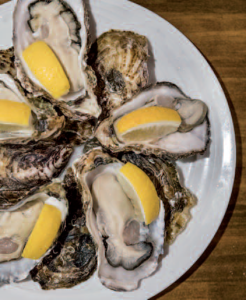 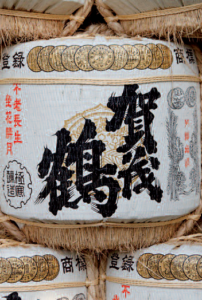 The sake from Kamotsuru Brewery has won numerous
awards.

Another local product, whose roots reach back in time, is sake. Hiroshima has made a name for itself as one of the top three places where sake is brewed in Japan, despite it not necessarily possessing the right conditions for success. In particular, the water, a fundamental element in the crafting of this spirit, was too soft. However, thanks to diligent research, particularly by one Miura Senzaburo at the end of the 19th century, a solution was found and Hiroshima’s technique of fermentation in fresh water gradually allowed the area to become a stronghold of sake brewing. You need to go to Saijo, to the east of Hiroshima city, to understand the importance of sake in the region. The sake festival, held annually in October, illustrates this well, and it is the only place in the country where the drink of the gods is honoured in this fashion. Of the eight local breweries, seven are located on the same street, that even has the name Sakaguradoori (Brewhouse street). You can visit all of them and have sake tastings there, but the most impressive is Kamotsuru brewery (4-31 Saijohonmachi Higashi- Hiroshima 739-0011), founded in 1918. Besides its magnificent architecture and the warmth of its welcome, the visitor has the opportunity to taste the different sakes brewed there and to discover their different products, which often win awards in national competitions. This is also an excellent memory to pack away and bring home with you. So make sure you don’t miss out!
ODAIRA NAMIHEI