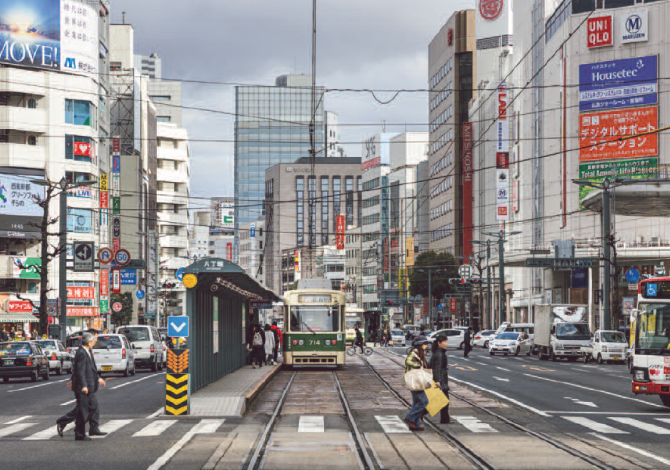 This city and the surrounding region that were so devastated by the atomic bomb, has seen a rise in interest from both Japanese and overseas visitors.

The Hiroshima region has made a successful comeback thanks to its many assets and a strong urge to promote the passion for life here.

Japan is undoubtedly a country that pays great attention to rankings. Among the nation’s many annual classifications, some are more prestigious than others, but one of the most influential and most quoted is the list of trending brands published in December by Nikkei MJ, a specialist marketing journal of the Nikkei group. When a product appears on this list, there’s no doubt that it has had a successful year. In 2016, in addition to the logical presence of Shinkai Makoto’s hit film Your Name, which beat all Japanese box office records (see Zoom Japan no.66, December 2016) and Pokemon GO, which brought Nintendo back to the games industry’s centre stage, fifth on list was Hiroshima. It’s rare that a whole prefecture is quoted in this famous ranking but Hiroshima more than deserves the recognition after hitting the headlines so often and for so many reasons during 2016. This accolade has undoubtedly underlined the region’s undeniable dynamism, and is even more interesting in the context of a two-tier Japan, with Tokyo in an increasingly dominant position and the rest of the country trying increasingly hard to keep up. Hiroshima has learned to do things its own way in many fields, and has shown other regions that they don’t always need to follow the dictates of the central authorities.
For a start, this kind of independence was demonstrated in sport when the Hiroshima Carp, the local base-ball team, won its first title after 25 years. The enormous enthusiasm that greeted this win has spread beyond the prefecture’s boundaries and reinforced its positive image throughout Japan. However, the rest of Japan has not always been sympathetic towards Hiroshima. Victims of the first atomic bomb dropped in human history, the city and its inhabitants have suffered discrimination ever since because of fears about radioactivity.
Despite this situation, the people of Hiroshima have never given up, with many active in the peace movement and in the battle against nuclear power and nuclear weapons. Even though this deep-rooted pacifism doesn’t enjoy universal favour, especially at government level, it found a strong ally in Barack Obama during 2016. Taking part in his last G7 summit as President of the United States, he decided to travel to where the first atomic bombs were dropped to “reflect on this terrible force that was liberated in the not so distant past.”, saying that “We have come to pay our respect to those who died”. His symbolic presence and his call for a world without nuclear arms showed the importance of the anti-nuclear movement that the population of Hiroshima has been endorsing for decades. This also partly explains why the region is so attractive to foreign tourists, distinguishing it from the rest of the archipelago. Intriguingly, although the majority of visitors who travel to Japan are Asian, mainly Chinese and Korean, the region of Hiroshima mainly welcomes westerners. Most of them are American, but there are also a fair number of French and British visitors. If you add in the Australians, the total for 2015 was 636,000 tourists from the west, as opposed to 417,000 from Asia. It may just seem anecdotal, but this difference is important because it highlights the wealth of Japan’s regional culture and history, while most of the other large tourist centres depend on shopping and all its attendant limitations. Furthermore, the number of tourists coming to Hiroshima increased by 34% in 2016 compared to the previous year, in contrast to an average national growth of 16% over the same period. This is the major reason why the region is attracting attention and has become one of “the products of the year”. 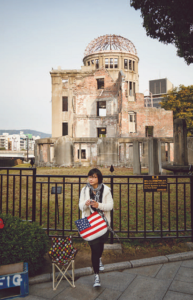 As the victim of the first ever atomic bomb to be dropped, the city of Hiroshima leads the fight again nuclear weapons.

However, marketing abroad isn’t everything, and there are other keys to understanding the growing interest in the Hiroshima region among many Japanese. For several years there has been a noticeable increase in people interested in finding a new life-balance far from the large urban centres such as Tokyo. This trend has been followed and examined for many years by the Tokyo based Furusato Kaiki Shien Sentaa (Returning to Ones Place of Birth Help Centre). After coming in with a poor ranking for many years, Hiroshima prefecture is now one of the phenomenon’s great beneficiaries, having made an impressive leap in 2015 from 18th to 6th position nationwide. This progress can be explained by a widespread change in perception of Hiroshima’s image. The dynamism that it generates now, coupled with a pleasing natural environment, has awoken people’s desire to move to the coast by the Inland Sea, to take advantage of the quality of life it has to offer. According to the Hiroshima Kurashi Sapooto Sentaa (Support Centre for Living in Hiroshima), which advises those who wish to settle in the region, the number of families who made the move in 2015 rose by a factor of six compared to the previous year. That’s still not enough for the prefecture to say it has tipped the scales in favour of inward migration, but it is doing something about the the haemorrhaging of its population, allowing it to remain in the top half of the annual rankings of prefectures according to their net migration levels. What’s most encouraging is that it is mainly young people demonstrating a wish build a life for themselves in Hiroshima.
The region appears to want to continue to encourage this phenomenon by adopting a longterm vision. Could this superhuman effort to push it’s anti-nuclear stance be down to the tragic past of Hiroshima prefecture’s principal city, despite the successful rebuilding? The answer isn’t clear, but there’s no doubt that this region’s collective state of mind has led to its excelling in many fields. Hiroshima is not afraid of competition, even from those who, on paper, appear stronger. The Hiroshima Carp’s success is one example, particularly with the return of pitcher Kuroda Hideki to his native country after leaving behind a successful career in the United States. He has set an example by showing that the success of Hiroshima as a whole depends essentially on people motivated by a single desire, perhaps the most noble desire of all, to live happily.