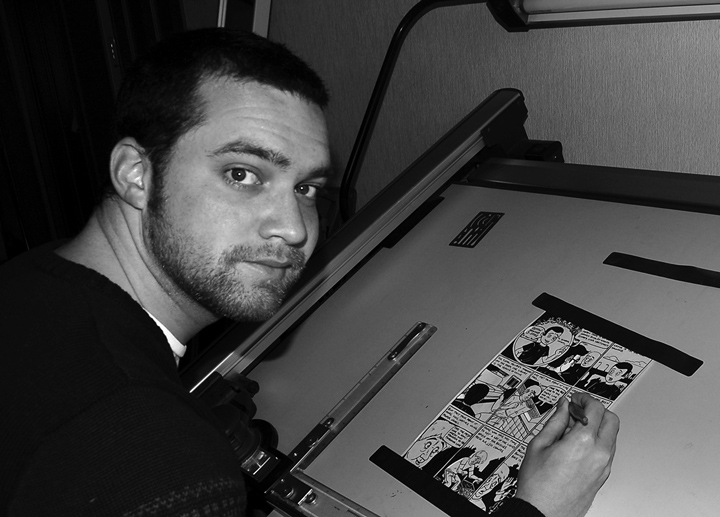 In the space of few years, Adam Pasion has succeeded in making his mark in the world of dojinshi (fanzines).

while many foreign comic artists dream about cracking the Japanese mainstream market and becoming the next Shonen Jump sensation, there are others who prefer to follow their own muse and remain part of alternative culture. One of them is zine maker and Nagoya resident Adam Pasion who was born in California, but whose family originally comes from the Philippines. Pasion’s comic art has been featured in such mainstream publications as The Japan Times and Japanzine, but his beginnings are firmly rooted in DIY culture. “I was cutting class one day in high school and didn’t have anywhere in particular to go,” Pasion says, “so I wandered down the street to a nearby comic-book store. It had one shelf full of mini comics. I thought it was so cool to see that not only were there people out there making handmade, photocopied comics, but that there was a market for them – people actually bought them. I bought a few, and they were unlike any comics I’d ever read. It was only later that I discovered zines and started to notice all the similarities between the two genres.”

Pasion’s love for the medium, though, really developed after moving to Japan in 2006. “Coming from San Francisco, zines and mini-comics were so accessible that I completely took them for granted,” he says. “It wasn’t until I moved to Japan and was cut-off from that scene that I began to be more proactive about zines. I had to make new connections – real connections. I went in and actually had conversations with the zine shop owners, I searched for places where they might be sold, and the apparent complete lack of zines in Japan made me really hunt them down. The extra effort made all the difference for me. For the first time since I started making zines, I made some truly deep connections with several people both here and abroad. I’ve become actively involved in trading, which is a constant inspiration for me to keep trying to improve my product. I’ve been collaborating more and trying to reach out to make stronger international connections, and I never would’ve done that if it hadn’t been for the isolation imposed on me by Japan’s mostly hidden zine scene.”

Pasion admits that getting access to the local zine community was far from easy. “The hardest thing to break into is the world of underground comics in Japan, not because it’s hard to find, but because it’s so widespread that it’s almost impossible to find a point of entry. There are tons of stores selling dojinshi (fan-produced indie comics) but without exaggerating, 90% of it is either porno or parody-porno. As cool as it is to see Darth Vader having sex with Luke Skywalker, I really wish I could find more substantial stories. There are only so many naked Harry Potter pictures you can see before you just lose interest.”

Not content with creating, selling and distributing his works, last year Pasion joined director James Stacey (owner of Black Hook Press and the Hakusen gallery in Tokyo) and chief coordinator Aude Luce (a French woman who currently lives in Melbourne) in launching a new annual comic event: Comic Art Tokyo. “CAT is an international festival with a particular focus on the influence of Japanese comic books on global culture,” he says. “The event is mostly aimed at broadening the understanding of global comic culture in Japan, so the primary language is Japanese, but we have many non-Japanese speakers and artists showcasing their works as well as translators for all the Japanese lectures. There will also be many French publishers and creators.”

When it comes to comic book conventions, Japanese fans have been setting records for decades, starting with Tokyo’s Comiket, which attracts over half-a-million people twice a year. But while these events are mainly about buying and selling, and focus on dojinshi, CAT aspires to cover all those genres (mini comics, art zines, indie comics, etc.) that tend to get lost in the mix at such large festivals. “Even in Japan, comics are not only about giant mecha suits and scantily clad school girls,” says Pasion. “That’s why at CAT, we’re more focused on comics as a form of art and the interaction of various comic traditions such as manga, Franco- Belgian comic strips (bande dessinée or BD), and North American alternative comics. Moreover, this is a highly community-focused event, with many lectures and interactive workshops.”

Though still based in Nagoya, Pasion’s duties have actually increased for this event. “Last year I was the coordinator, which, basically, means managing all the speakers and tables in the artists’ aisle, and making sure they know what to do and where to go. This year, I’m continuing to do that, but am also taking a larger role in the planning stages. Stacey and Luce are still doing the lion’s share of the planning, but we are a small team of people, so everyone is helping in whatever way they can.”

Pasion hopes to build on last year’s success and to make CAT bigger and better while retaining its originality. “Last year, for example, we had some big names such as legendary mangaka Hayashi Seiichi, but more than that, I really loved the feeling of total community. Walking around and seeing people drawing portraits of each other, trading their work, getting inspiration from professionals in their field, making buttons and craftwork with each other – it was a day of people just revelling in their shared love of comic culture. Most artists had never met before, and yet they hung out together and made new friends. When I see them interacting on SNS or in real life, it makes me so happy that we could play a part in making that possible. I think everyone came home from that event inspired to make more art, and I couldn’t ask for anything more.”

No60 [ENCOUNTER] A new cultural expression

No54 [TASTE] A strong need for education

No50 [THE FUTURE] Make way for women!

No61 [SHOWPIECE] In the footsteps of Cassavetes