Our colleague Gianni Simone has released an original and thorough guide, which will delight lovers of manga, anime and games.

Throughout all the years he has worked with us, Gianni Simone, a contributor to Zoom since its inception, has demonstrated his deep knowledge of Japan and the Japanese people. His curiosity has led to our discovery of many, sometimes little known, aspects about a country for which we have great affection, especially its culture. It’s precisely this world of culture that our colleague has decided to introduce us to in his latest book Tokyo Geek’s Guide, published by Tuttle Publishing. As its title suggests, the book has little to do with the ancestral treasures of Japanese culture, preferring to emphasize what has enabled the Land of the Rising Sun to spread its influence across the world. It’s especially true when words such as manga, anime or cosplay have become part of our everyday vocabulary, and are now perfectly understood by most people whether in London, New York, Rome, Beijing or Paris.

This continuing interest in products from Japanese popular culture is best summed up by the word otaku. This was initially a pejorative term, Gianni Simone explains in the introduction of his book, since “all those ‘socially inept young males’ who were guilty of seeking refuge in a fantasy world of video games, toys and cute girls were branded with the otaku label.” This somewhat reductive vision has evolved over the past two decades as various elements of Japanese pop culture have won over the hearts of the Japanese, followed by millions of people across the world. In fact, without the success of works by Miyazaki Hayao, Otomo Katsuhiro, Oda Eicihiro, or games created by Nintendo or Sony, and JPop music bands, it’s unlikely that the present enthusiasm for Japan would have happened, or at least not to the same extent. In 2016, 24 million tourists visited the archipelago, a historic record. A large proportion of these visitors came to rub shoulders with a pop culture that was part of their daily lives, but which they were unable to “experience” in its original setting. 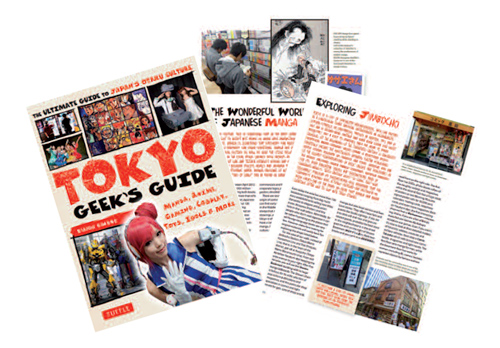 Like Catholics who go to Rome or Muslims who travel to Mecca, lovers of manga, anime or other products of Japanese culture feel the need to set BooK Tokyo, the capital of pop culture Our colleague Gianni Simone has released an original and thorough guide, which will delight lovers of manga, anime and games. foot in the “Holy Land” of otakism, namely Tokyo. However, you still need to know how to find your way around. Besides its enormous wealth of information about local pop culture, Gianni Simone’s book proves to be the ideal companion for all those who wish to explore this world full of surprises. The local knowledge accumulated over time by the author allows the reader to follow him with complete trust into the labyrinth of Tokyo’s neighbourhoods where it’s easy to get lost if you’re not familiar with the area. Before transporting us to Akihabara, Harajuku, Nakano, Ikebukuro or even Odaiba, Gianni Simone offers an overview of the different building blocks of Japanese pop culture, a great way to inform those lacking in general knowledge in this field, and help them shine when they next play Trivial Pursuit. The author starts by casting a spotlight on an iconic character, the ancestor of all the characters that populate the world of otakism: Godzilla. This monster, despite the 63 years since it first appeared, remains a firm favourite of the Japanese, and for Gianni Simone to have chosen it as a benchmark demonstrates the degree to which he has understood the diversity and influence of this pop culture with no equivalent in the world.

Now you have been introduced to this book, the only thing left for you to do is to set out and conquer the Japanese capital to discover the amazing world of otakism you’ll find there. As this is a guide, the book is full of addresses for must-see places, which will transform the visitor into a real Japanese otaku. A great way to make all your friends jealous!

No51 [MUSIC] A fresh look at the J-music