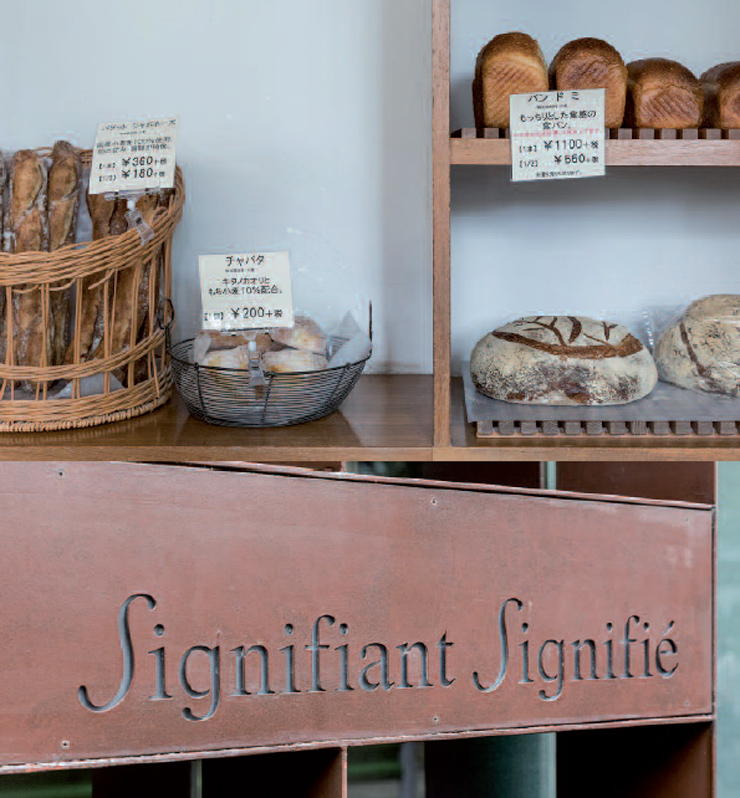 For the past ten years, this baker has worked passionately to improve his products.

Shiga Katsuei, head chef of the Significant Signifié bakery, has created a unique kind of baguette.

You’ve just reviewed your means of production. Why? What changes have you made?
SHIGA Katsuei :I opened my boutique in 2006. Since then, my ideas about how the bread we make at Signifiant Signifié should taste have changed, and we have gained a lot experience. I like to question myself constantly, face new challenges. Why use this wheat? This flour? How do they affect the flavour? How will the taste change if I alter the temperature, lengthen the time for the dough to prove? Since opening, I’ve employed a staff of twenty, ten of whom work in the kitchen making bread for sale in the shop and our two other outlets situated in the Takashimaya Nihombashi and Takashimaya Tamagawa department stores. The bread is made in the evening until 11pm. The team come back in the morning to bake it, and the shop opens at 11am. After twenty years experience, as I had already worked as head baker at Pelletier then at Fortnum&Mason before setting up on my own, I decided to review what we knew and the way we did things by trying out a different oven and allowing the bread to prove longer. We decided to start focusing on using Japanese flour by increasing the amount of domestic flours in our production. I also try to consider the question of nutrition; bread must both taste good and be healthy to eat.

Nowadays, your speciality is a baguette you leave to rise for 120 hours. Can you explain this process?
S. K. : We’re very proud of implementing this technique, which is unique in the world. The longer baguette dough is left to rise, the more the flavour of the flour develops. This takes place due to the number of little bubbles that can be seen forming on the crust. Proving the bread allows it to develop new flavours as the yeast reacts with the wheat flour, and increases its elasticity. Usually, our baguette dough is left to rise an average of three hours. The texture after 120 hours of proving is quite distinctive. The baguette has changed shape, it’s much narrower, the texture is denser. It tastes quite different. We made this discovery after very many test runs. It was achieved by regulating the temperature and the time the dough was allowed to rest. After all these attempts, we decided that 120 hours was the ideal length of resting time to produce the result we were looking for.

Baguettes, farmhouse bread, bread with olives, nuts or figs. You’ve chosen not to sell any Japanese style bread?
S. K. : We do have some bread with cheese that’s similar to Japanese bread, but that’s all. Our savoury breads are rather more Western influenced. In my opinion, there are different sorts of customers in the market for bread: those who prefer the taste of baguettes and farmhouse bread, those who are happy buying the bread sold in convenience stores, and those who want to buy shokupan. Over the past ten years or so, more and more small artisan shops have appeared. Their clientele has become attached to this way of shopping, which is more family friendly and allows people to connect. As for Japanese chain stores such as Donq, Pompadour, Andersen Kobeya Kitchen, you can see that they are competing with each other, which is not true in the case of owners of small independent shops like our own, as we all cater for different niche markets. Our strong point at Signifiant Signifié is still our baguettes and farmhouse bread, but to satisfy people with other tastes we also sell our own white sliced loaf, which is our top selling bread alongside ciabatta.

What do think of the rise in specialist shops that only sell shokupan?
S. K. :I think it’s very interesting; there’s a strong demand for that kind of bread, inspired by American bread, which is consumed a lot in this country. It’s obvious that there has been a great increase in the consumption of bread, especially in the morning for breakfast. It’s practical, easy to eat and fills one up. I think that there are far fewer artisan bakers who have chosen to concentrate on baguette or farmhouse bread either in Tokyo or Japan as a whole. It’s definitely more difficult to find other kinds of bread besides shokupan, but I’m convinced that the number of artisan bakers opening their own small shops will rise in the years to come. The trend will continue to increase.