To appreciate the difference in flavour of the three varieties of shokupan, customers get three slices.

Appreciation for Japanese white sliced bread is on the rise across the archipelago, and it’s now about to be exported.

It’s almost 10am, in Ginza the smart district of Tokyo. Workers are streaming through the entrances and exits of nearby underground stations. The shops are slowly opening their doors. Down a little street, two short steps away from Yurakucho station, is a discreet red shopfront. A delicious smell of freshly baked bread wafts out from the shop kitchen. Centre The Bakery hasn’t yet opened its doors, but customers are already queuing outside. “Every morning, we open at 10am, and every day, there’s a queue outside,” smiles Takada Atsushi, the baker. “By 11am, it’ll take a minimum of an hour to get inside the café.” Throughout the day, the shop is never empty. “It’s intensely hard work for everyone until 3.30pm,” he says, concerned about the wellbeing of his staff and the long hours they put in. “The café closes at 5pm, but we continue overthe- counter sales until 7pm.” And at that time of day, you still need to be patient and wait a good half hour before being able to go home with your precious loaf of white bread. Centre The Bakery is a leader in the ever-increasing number of shokupan bakeries in Tokyo. These shops started opening a few years ago and have been very successful. According to Takada Atsushi, this success is due “above all, to the fact that 70% of the bread eaten in Japan is shokupan, a white bread with a soft texture, which you can find everywhere across the country. The other 30% of the market consists of other types of bread, while the baguette represents only 1 or 2% of Japanese consumption. Shokupan is a major item in the Japanese diet. It’s the bread that people eat on a daily basis, at any time of the day. For example, in my case, I like to eat baguette or kare-pan every now and then, but I eat shokupan every day. It’s become a habit, and I eat it on a daily basis without exception.” 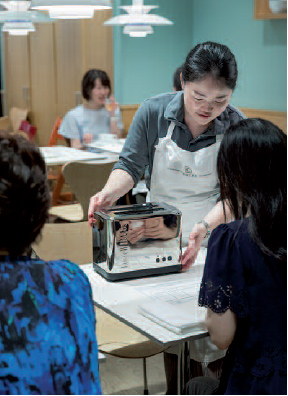 Customers can choose to toast their slices of
bread.

Nevertheless, he’s not happy about this “boom” in shokupan specialists. “I prefer to call it a movement. It’s a normal development, a process of bread-making we’ve been working on for a long time. Following the commercial success of Kin shokupan in 7eleven shops in 2013, with its emphasis on upmarket, superior quality ingredients, we became aware that the population is very interested in the quality of its bread, even if that means it’s going to be more expensive. And that’s the niche market we were thinking about and hoping to be part of – one of exceptional quality.” To achieve this, tests took place in the kitchens of Brasserie Viron over a span of five years. Takada Atsushi, then manager of the brasserie, started to focus on this new project in 2008. He and his team studied shokupan, its possible varieties, textures, recipes, smell, and baking techniques. He selected the best flours. “We just never stopped testing before opening Centre The Bakery. For it to be successful, we required a taste with outstanding flavour. When Japanese eat shokupan, they expect a well-balanced taste, a bread with a slightly elastic texture as well as tender and soft — mochi-mochi as the Japanese say. This texture is very similar to traditional Japanese pastries or to natto. By mixing several Japanese flours, including one from Hokkaido and another from the south of the country usually used for making noodles, we have developed a recipe that is worthy of the quality we wish to offer our clientele.”

The café with its distinctive décor was “imagined for women, who represent 80% of the shop’s clientele. In Japan, women often like these shops in which they can experience unique flavours in a beautiful setting. We gave as much attention to the decoration and the design by Nomura Kogei, as we did to the taste of our bread.”

His shokupan features on the menu for breakfast, but also for lunch in the form of sandwiches, from 11am. “In the kitchen, we make three kinds of shokupan: the first, Japanese, is made from three home-grown flours, and it represents 80% of our sales. The second, the Pullman, is made from Canadian flours, as many raw food materials in Japan are imported from Canada. Its texture is slightly more dense. Last but not least, the Yamagata, our British bread, has an even crunchier texture. For this one, we use Viron’s Retrodor flour, which contains more gluten, and we make it over the course of two days because it needs 36 hours to prove before it achieves the taste we want.” 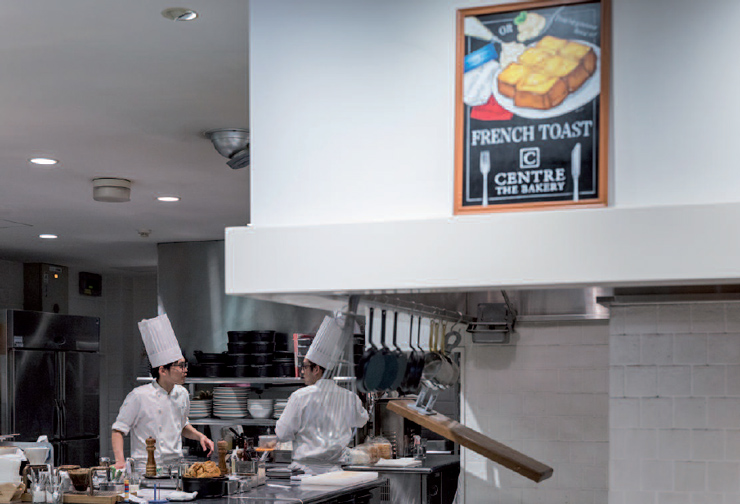 After having conquered Japanese hearts, Centre For Bakery is about to open a shop in Paris, in the trendy Le Marais neighbourhood.

“For breakfast, we offer slices of bread from two or three different shokupan varieties, according to the customer’s order, with butter and big pots of jam. The customer can choose to eat it fresh, or use one of the shop’s many toasters or the charcoal grill for a different taste. The idea is that tasting and eating should be entertaining,” Takada Atsushi adds. Sandwiches are available from 11am. Breadcrumbed pork, tuna, potato salad — there are over a dozen options. “The most popular are the omelette, the fruit, and the BLT sandwich. We cut the crust off and serve it on the side so that the customer is able to appreciate the different flavours. Without the crust, the texture is very light and fluffy.” Another version is the toasted cheese “made with Hokkaido raclette, slightly milder than the French and Swiss varieties, which are considered to be too strong by most Japanese.”

After becoming famous across the whole of Japan, Centre The Bakery’s audacious concept is starting to interest foreigners. Tourists, mainly from Korea, but also from China and Dubai, queue up to taste the famous Japanese white bread while visiting Tokyo. The brand is also just about to export its know-how to France where, in October, it will open a shop in the trendy Parisian neighbourhood Le Marais. “We can’t wait!” says Takada Atsushi excitedly. Kimura Hidefumi, who currently works in Ginza’s Centre the Bakery, will soon travel to the French capital to become the chef in the new boutique. He’s fluent in French after living in France for five years before returning to Japan and being hired by Centre The Bakery. He’s very excited about this new endeavour. “It is time to change the image of white bread, and give it a real culture and reputation for excellence. This bread was unknown to me before I started working for this brand. Since then, I’ve developed a passion for it and I’m very proud of the opportunity I’ve been given to represent shokupan.” Isn’t it a risk having soft white bread on offer in a country where there’s a long tradition of eating crunchy baguettes? “I expect it to be difficult at first, but I strongly believe in the quality of our bread. It’s very different from what you currently find on the market. I don’t think people can appreciate it until they’ve tasted it for the first time.” In Paris, “we will also be able to try out new recipes and innovate, because we’ll have access to different flours than in Japan. We’ll also bring our trademark Japanese shokupan to Paris.” Takada Atsushi believes that shokupan has a bright future ahead of it in Japan, as well as throughout the rest of the world. “I think that more and more specialized shops will open up across the archipelago. National consumption will not increase, but on the other hand, there will be greater expectations for better quality. Japanese people want to eat bread that has been made with natural products. They also like the specialist shops, and the fact that each one is working on developing their own specific flavours, from which they can pick and choose according to their mood. I think that there’s also potential for the baguette in Japan where it’s very little known at present.” On the international level, “there’s all to play for with shokupan,” he says decidedly.