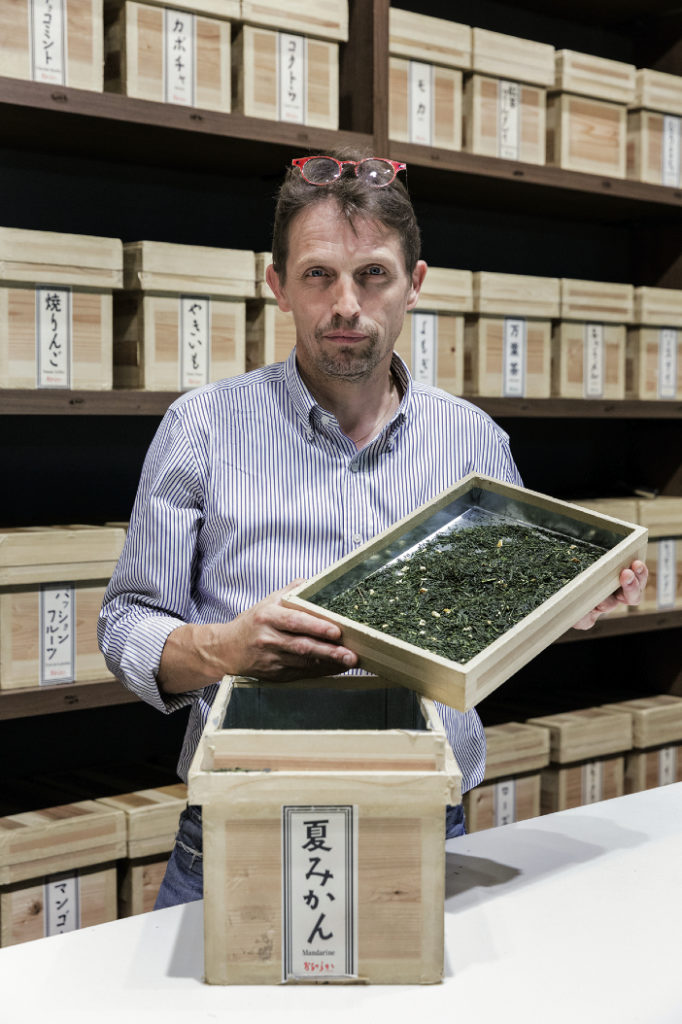 Eleven years ago, Stéphane Danton went into business selling tea. It turned out to be a great adventure.

Long-time readers of Zoom Japan already know Japanese “tea merchant” Stephane Danton, as he was featured in our eighth issue. As it happens, he was interviewed just before the triple disaster that crippled Tohoku and the Japanese economy in March 2011. Five years have passed since that interview and Danton’s shop, Ocharaka, is not only still open but has recently moved from the Tokyo suburbs to Nihonbashi, the city’s old trade and business centre. When we arrive at the new location in the basement of the new Coredo shopping complex, we’re told that the ever-busy Danton has not arrived yet, but we do meet Ocharaka’s newest recruit, assistant manager Benoit Kara, who is in charge of explaining the intricacies of tea making and introducing the many kinds of tea the shop sells to its diverse clientele. Ocharaka is particularly famous for its original flavour creations, so we ask Mr. Kara to give us a crash course in Japanese tea.

“Our stock of original blends can be divided into three groups: green tea, roasted tea and black tea” Kara says. “All of them are made in Japan, including the black tea, which is pretty rare, as most local farmers only produce green tea”.

“Each type of tea is combined with different flavours. Green tea, for example, goes very well with fruity flavours, from orange and lemon to peach, pear and strawberry. A very popular one right now is mandarin. Of course, the green tea base varies as well. We use a lot of mountain tea from Shirakawa (Gifu Prefecture) and a different variety from Kyushu in the south of Japan”. Apparently there’s only a slight difference between the two, but it’s very important when it comes to mixing them with different flavours. Melon, for example, goes very well with green tea from the south because of its sweetness, while tea from Shirakawa perfectly complements the bitterness of mandarin. “As they say in Japan, this tea is ronyaku nannyo, i.e. it appeals to men and women of all ages,” Kara explains.

Moving on to hojicha or “roasted tea”, we encounter a very different range of sweet flavours, such as caramel, sweet potato, pumpkin or choco-banana, that go well with this blend’s stronger aroma. Even in this case, the tea base used varies according to the combination you want to make. The main difference here is between asa-iri – when you roast the green tea leaves for a short time – and fuka-iri, when you roast them for a longer time. One good thing about hojicha is that it is a very low-caffeine tea because its leaves have been roasted. So people who can’t drink coffee can have, for instance, a cup of mocha-flavoured hojicha instead and enjoy a healthier drink that still keeps a coffee like aroma. Last but not least, there’s a small group of Japanese black teas. In general they are sweeter than comparable types of tea from India and Sri Lanka. Amongst the selection at Ocharaka you can find the always popular Early Grey, as well as white peach and spicy tea that smells like gingerbread. They also have lychee which, together with mango and passion fruit, is particular popular with people from South-East Asia. To the right of the flavoured teas we find the regular “straight” green tea. On each box one can read all the important information about that variety, including the tea producing area, as well as the all important flavour breakdown between the degree of shibumi (sour or astringent taste) and umami. Kara’s favourite tea is the one from Shirakawa and he never tires of recommending it to his customers. “Not only is it excellent tea, they’re among the very few producers who are trying to attract a foreign clientele,” Kara says. “Most local tea producers only care about the Japanese market, but these guys from Shirakawa are trying hard to get their message through, even going so far as to translate detailed explanations of their tea’s properties into other languages”. 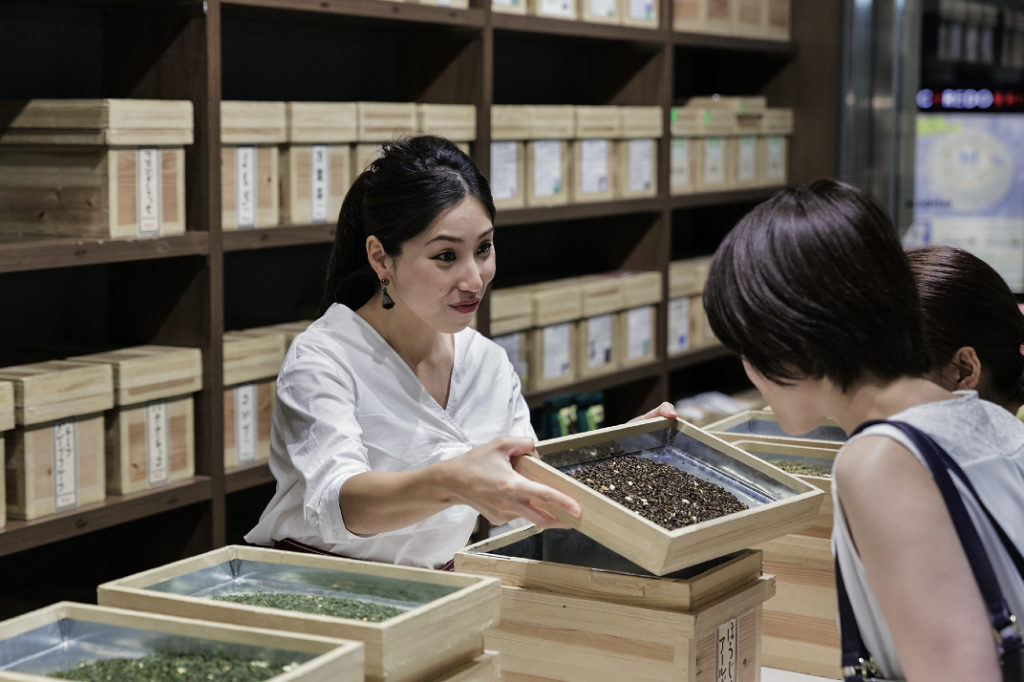 Danton finally arrives. He is a veritable human dynamo who can never stand still and runs around the shop checking that everything is all right. He has a meeting on Skype scheduled in fifteen minutes, but kindly takes time to talk to Zoom. “I source our tea from seven small farmers around Japan,” he says. “The teas from the north of Japan (e.g. Saitama and Gifu prefectures) have a rather bitter edge, while the ones from the south (mainly from Kagoshima Prefecture) are sweeter. I don’t go with the major producers, like the farms in Shizuoka, because they are very strict and I like to do things my way. I prefer to explore the market and discover new possibilities. It’s exactly the same approach I had in the past with wine, when I used to work as a sommelier. I like to know as much as possible about the tea I sell: who the farmers are, what the story is behind each tea. All my knowledge about tea doesn’t come from the books; it comes from talking directly to the farmers”.

Being a tea seller – especially as a foreigner in Japan – is not easy, what with the nature of the market and the somewhat closed world of the local tea business, but Danton’s love affair with tea has never been about money. “I could have had a much easier and more successful life if I had kept to selling wine,” he says. “If I’d opened a wine bar here, by now I’d be rich. But I felt this strong attraction to tea, so I followed my gut feeling”.

Having first opened his shop 11 years ago in Kichijoji, Danton accepted an invitation to move to central Tokyo and opened this new outlet in 2014. “Starting out in 2005 was very hard, as nobody had faith in me,” he recalls. “Everybody here, the old timers and the insiders, expected me to fail, but as you see, I’m still here. They found it unbelievable that I would mix green tea with different flavours. They didn’t understand that firsttime customers from overseas find it hard to appreciate green tea. Flavoured tea, on the contrary, is a good way to attract new fans. They start with my original blends before moving on to pure highgrade green tea”.

Kara explains that it was the same for him. When he first met Danton as a customer, he was into flavoured tea (his favourite being choco-mint), but he later progressed to regular green tea. “Now I only drink flavoured tea for ‘fun’,” he says. “I still like it a lot and all these flavours are very interesting, but now regular green tea is the real thing for me. Many people can’t start their day without a cup of coffee in the morning. For me green tea does the same thing”.

In 2011, when Zoom first interviewed Danton, things were especially difficult, as he did not earn a penny for three to four months after the great earthquake and tsunami that year. “Of course I had to pay the rent; I had to pay my employees and the cost of all the tea I had bought just before the earthquake,” he says. “But little by little, I was able to survive. Other people were not so lucky”. Danton’s next step is to expand his operations abroad. In fact, last October he opened a branch in Singapore. “They couldn’t be more different from the Japanese,” he says. “In Singapore they’re always looking out for new opportunities to do business and make money. But in Japan, after 11 years, even now that everybody knows me, I still have some problems with the local industry – it’s a closed world. But I’m not working for them, I’m working for my customers, and as long as they are satisfied, everything’s good”.