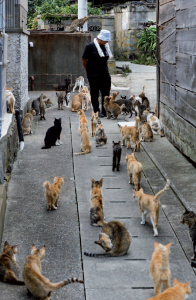 A little island lost in the middle of the Inland Sea has become a tourist attraction for cat lovers, but the locals aren’t happy…

As the boat that connects the islands of Shikoku and Aoshima, situated in the west of the Japanese archipelago, draws into the little port, cries of “Look at all those cute cats!” shatter the silence that reigned during the short half-hour crossing. As soon as they see the tourists arriving, an army of brown and ginger cats muster at the harbour’s edge to watch the boat approaching. Yes, they know that the city people, often from Osaka or Tokyo, have food for them. As soon as the captain allows people to disembark, the cat lovers shout with joy, pouncing on the cutest cats they can find and taking photos of them. Alongside the tourists are several local, often quite elderly women, whose daily occupation is collecting the newspapers and other litter left behind on the boat. Here, over 13 kilometres away from the Shikoku coast, this boat is indispensable to their well-being. Other women, sitting on a bench at the back of the tiny harbour, watch a group of a dozen tourists. Their facial expressions are hard to interpret; perhaps they display feelings of perplexity, bitterness or resignation? At any rate, these are not expressions of welcome for the tourists, who have come to visit an island somewhat cut off from the rest of Japan, and wasn’t even fully connected to the telephone network until the 1980s. More than the tourists though, journalists are not welcome. As soon as they make themselves known, the locals turn away with expressions on their faces like little birds startled by the shadow of one of the island’s numerous cats. In short, two worlds that mistrust each have come face to face; those from outside – whether tourists or journalists – who often come from the city to have fun with the cats, and the islanders, tired of these people who show little respect for the rules of day to day life on the island. In May 2013, a team of TV journalists came to this tranquil island to make a documentary on the cats that clearly outnumber the island’s human population. After it was broadcast, Aoshima became known internationally as a sanctuary for cat lovers. Information about the island circulated on the Internet, causing a large influx of tourists to an island that was formerly home only to its local inhabitants. The problem is that there is no infrastructure to welcome tourists on Aoshima.

There are no hotels, no restaurants, nothing. So without any means of benefitting from the tourists’ arrival, the locals miss out on taking advantage of this enthusiasm for the cats, and all they can do is watch the visitors having fun. Conflict between locals and the tourists is on the increase. “They play with the cats down by the harbour, but it’s an important location for us to access our supplies. Frankly, I would like them to leave us alone,” says one of them. As the local population still hasn’t mastered contemporary means of communication, it remains powerless in the face of all this media coverage. Journalists aren’t welcome anymore because those who have visited Aoshima wrote only about the cats. The local daily newspaper, Ehime Shimbun, did write an article about the locals difficult relations with tourists, but it didn’t improve matters. That’s why the locals agreed not to speak to journalists anymore, it is their only way of resisting the excessive media interest they feel is so unfair. Nevertheless, the hundreds of cats don’t care about these problems in the slightest, and continue to follow the people who feed them. It’s obvious from how skinny they are that they are starving. Nobody knows exactly how many cats there are, but a TV show has suggested around 140, although this cannot be easily verified as they keep reproducing. One thing is certain: there are too many of them for a island so small that you can walk across it in just five minutes. The human population, ten times smaller, can’t take proper care of them anymore either. The locals confirm that the number of cats has increased following the huge influx of tourists since 2013. The most obvious explanation is that the cats were previously scattered across the island, but as Aoshima’s population gradually decreases they have since regrouped closer to the harbour where they find humans who will feed them. In July, the 15 inhabitants of Aoshima and the nearby city of Ozu responded to a poll on the matter.

Thirteen people were of the opinion that the number of cats should be reduced, and suggested neutering them. However, “to neuter the cats costs 15,000 yen for a male and 22,000 for a female. So who is going to pay for this?” asks Tanaka Kosaku, one of the islanders who asked that his name be changed. Moreover, Ozu is running a deficit, so “we can’t expect them to help,” worries Yoshioka Tomoko, the head of an animal protection organization that has already castrated a dozen cats for free. Everybody is passing the buck. Everyone understands that these cats need to be neutered, but nobody can afford the cost, so negotiations have stalled for the moment. The Cats of Aoshima Association, created by four local inhabitants, installed a box for donations down by the harbour, but Kamimoto Naoko, the group’s president, had only received 2,000 yen (£10) by the end of August. One other idea that has already been discussed by the islanders is to build restaurants and a hotel to profit from the tourists. “We talked about this two years ago, but decided against it because most of us would like to continue living here peacefully. If there had been a young couple that was ready to give it a shot, maybe things would have been different,” says Tanaka Kosaku regretfully. In fact, this little rocky island is one of the worst examples of depopulation. Though it was home to 800 people in 1940, Aoshima experienced a huge drop in population and has just 15 inhabitants today, with an average age of around 70. Without this problem, the island would be an ideal destination for a short summer break. Wellcared for streets pass in front of traditional wooden houses nestling on the side of a hill from where there is a beautiful view over the sea. It forms a little labyrinth surrounded by the cobalt blue waters, an ideal location for those who love fishing. However, the locals now only ever speak of the past with nostalgia. Houses are abandoned to the mercy of weeds and the sky shows through holes in their roofs. Particularly poignant is the music classroom of the old primary school located on the top of the hill overlooking the harbour, where the sea breeze blows over a piano. If the locals are not happy to look into the question of the cats, it is because their own community is already under threat. “Of course it’s a problem. I don’t want to see my island become like the Senkaku Islands,” says Tanaka Kosaku, speaking of the little deserted islands floating in the middle of the East China Sea. He is already working hard to help the community and is justifiably worried. “It’s a problem across the whole of Japan. The population is too concentrated in the big cities,” he adds. Back at the harbour, several people have returned to sit on the bench. Some of them stroke the cats that sit purring on their laps. One of the ladies admits with a smile that, “Some people hate them. But they do bring pleasure to us”. She looks into the distance as if remembering a time filled with children’s laughter. “I am happy that we have the cats, otherwise life here would be a bit too peaceful,” says this octogenarian who doesn’t know how long she will be able to remain on the island.