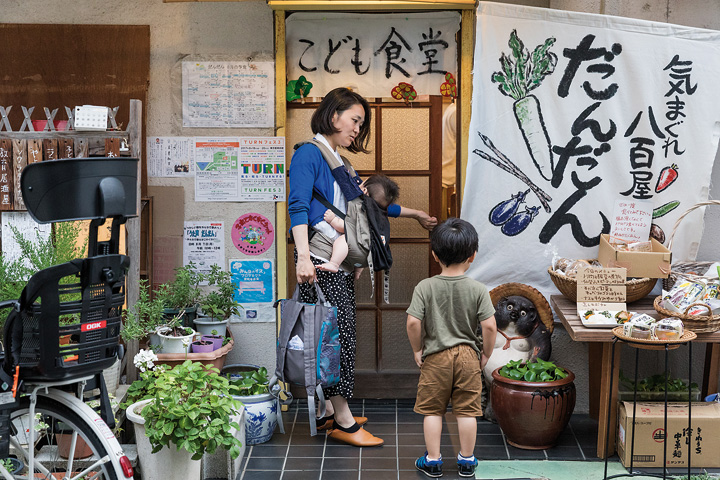 According to Asahi Shimbun, there were 316 kodomo shokudo in the archipelago in 2016.

Opened by Kondo Hiroko in 2012, this “children’s cafeteria” has been emulated countrywide.

In the Ota district, not far from Haneda airport, Kondo Hiroko, aged 59, waits for the children who usually arrive in groups around 17.30, after primary school closes. “It’s odd they haven’t arrived yet”, she say. “But it’s the first day of the summer holidays, and they might have already left for Tokyo”, replies one of the three volunteers who are busy in the kitchen preparing that day’s meal. “Oh well, usually they all arrive together around this time, do you really think they’ve gone on holiday?” says Kondo doubtfully. In this small shop named Kimagure Yaoya Dandan (The fantastic grocery shop Dandan) and managed by Kondo Hiroko, very young children and their mothers are made welcome every Thursday evening from 17.30 onwards. The meal, prepared by volunteers who are local mothers themselves, is served almost free of charge – 100 yen for children and 500 yen for adults. “Before doing this, I used to work for a dentist, and that made me want to something for people’s heath”, says the owner of this organic grocery shop. She is continually rushing around this small space, just 18 square metres, strewn with boxes of vegetables and kitchen utensils she sells to her clients. The walls are decorated with a dozen pictures for children. “An artist friend of mine gave them to me”, she smiles behind thin rimmed glasses, a scarf on her head. As for the word “Dandan”, Kondo Hiroko took it from the dialect spoken in her native region, Izumo, in the west of the archipelago (see ZOOM Japan n° 54, September 2017). “It means “thank you”. Thank you to whom? Well, I don’t really know, the idea just came to me”, she says.

In 2012, a teacher from a local primary school came to talk to her about a boy whose mother suffered from mental health problems and wasn’t capable of feeding him properly. “She told me that the boy only ate bananas at home”, she recalls. And that’s how she got the idea of offering everyone a balanced meal at an affordable price in her grocery shop. She put the idea into practice later that same year. “But it was too late for the little boy, who had already been taken into care by children’s social services”, she says regretfully. She named her concept kodomo shokudo, literally “children’s cafeterias”. “I also want to help parents in difficulty, because it’s very hard to bring up children. But society doesn’t really allow them to ask for help. That’s the reason I opened the cafeteria”.

Today, in Japan, one child in seven lives on the poverty line, and this kind of cafeteria conceived by Kondo Hiroko, is on the increase at a similar rate. However, it’s difficult to know the exact number as they are not part of a government initiative. Nevertheless, the daily newspaper, Asahi Shimbun, identified 319 in 2016. “I don’t really expect this to become a national trend”, she confesses. Every Thursday, she and her team of eight volunteers welcome between 40 to 50 children and adults.

The children’s ages range form 0 to 15-18, but there are many young mothers who come along with their young ones”, explains Kondo Hiroko. It has to be said that social inequality affects single parent families the most, with 50% living on the poverty line. “I didn’t set this cafeteria up with just children in mind”, she points out. “The cafeteria should be at the centre of a local support network in the district, and I aim to show that even if there’s no money available, we can help each other to sort out the problem”. So the elderly also come to Dandan, and talk with the children “as though they were their own grandchildren”. In this country with its aging population, poverty also has an impact on those over 65 years of age. It affects almost 20% of those in this age bracket, and more and more of them, especially those living on their own, die all alone – kodokushi – “a lonely death” as it’s called in Japan. The national yearly total of such deaths is 30,000. “They feel isolated”, explains Kondo Hiroko. “But just talking to families about isolation doesn’t necessarily solve the problem. So they come here and spend time with us in order to cope with the situation better”.

Katagiri Yukako was a housewife for forty years, and has worked with Kondo Hiroko for a year as a volunteer. She learned about the initiative from a TV report and “realized that I lived very near”, she laughs. “I, too, have a son and know how difficult it is to bring up children. I’ve always wanted to help other parents, so that’s why I came here”, she recalls while chopping vegetables. “I think it’s a great initiative, I watch mums begin to relax while their kids are talking and playing with other children they haven’t had the opportunity to meet at school”, she adds. Like her, most of the volunteers became aware of the initiative through the many media reports that mention the scheme. This high visibility results in Kondo Hiroko receiving many donations. Every week, she gets numerous deliveries of vegetables and fruit. The boys from the primary school don’t always come, but their mothers have started to show up. The meals, made up of four or five nutritionally balanced dishes and rice, are created by the volunteers every Thursday “out of ingredients we have in the kitchen”, as the person in charge tells us. “Today, a friend’s given us a watermelon, so there’s dessert this evening!” Katagiri Yukako calls out happily to one of the mothers. “I’ve been coming here almost every week for two years”, confides this mother who has brought her four year old daughter with her. “My husband gets home very late in the evening, and I usually eat alone with my daughter. But my daughter loves coming here, it’s much more fun. She has learned the word Dandan and says, “On Thursdays, we go to Dandan”.

“Sometimes, people don’t like children making a noise and running around. But here, it doesn’t matter”, says someone who’s come with her three-and-a-half year old daughter. As she’s unmarried, the almost free food on offer here is very important. “And also, I’d never be able to cook such varied and well-balanced meals every evening after work!” she continues. The mothers, who make up most of the evening clients, arrive one after another, chatting and laughing together while Kondo Hiroko and the volunteers talk and play with their children. The fifteen people in the little cafeteria are creating a buzz, and it feels like being at a large family dinner party.

For Kondo Hiroko, who thinks that “there is lots more to do” to ensure the children’s future, the cafeteria is only one activity among many that she’s proposing, such as classes in English and philosophy. Alongside her other plans, she’s started up a book club to read illustrated books. “All this has been organised in a rather haphazard way. It was a friend living locally who wanted to set up the English class. I never say no to these kinds of suggestions”, she says. Suddenly, a boy of about fifteen opens the door noisily and says, “Hi, I’ve come to help you!” He’s known Kondo Hiroko since Dandan was a simple grocery shop. He says he wants to help her “to repay her in kind”. So he puts on an apron and goes into the kitchen. After high school he hopes to work in the social welfare sector. “Bravo! You should teach my son to think like that”, Katagiri Yukako tells the young man who blushes a little with pride.

[FOCUS] Between fiction and reality