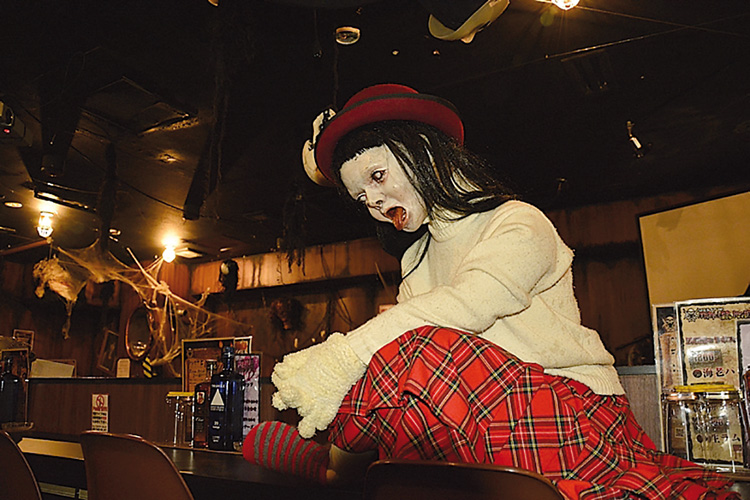 The kaidan Live Bar decor creates just the right kind of eerie atmosphere for the audience.

Opened by Kondo Hiroko in 2012, this bar has inspired numerous similar venues across the country.

The Tokyo district of Roppongi is famous for its discos and dance clubs, but there’s a place where one can enjoy a different kind of thrill: the Kaidan Live Bar.

Finding the place is easy because across the street one can see a bright yellow ドン·キホーテsign. That’s Don Quijote, a popular discount chain selling everything including lots of kitschy junk. The bar we’re heading for this time is a must for fans of Japanese ghost and horror stories. It’s located inside the Roa Building, an old structure exuding a rather eerie atmosphere. Inside, the place is decorated with skeletons, skulls, chains and cobwebs hanging from fake grimy walls. There are two sofas in the middle of the room, but one of them is already half-occupied by a couple of rather big dolls. One of them wears a junior-high-school girl’s uniform, the other one an old-style Western dress, and their disfigured faces are anything but cute. You get the feeling they’re going to move at any moment.

But the real attraction of the Kaidan Live Bar Thriller Night is the storyteller who comes out every hour and scares the bejesus out of the customers with his tall tales of the macabre. The 15-minute performance is included in the 60- minute, 3,500 yen, all-you-can-drink menu. The tales, of course, are told in Japanese, but even if one doesn’t understand Japanese, the spooky atmosphere (heightened by the screams of terrorized customers) and tacky special effects make up for the language barrier. 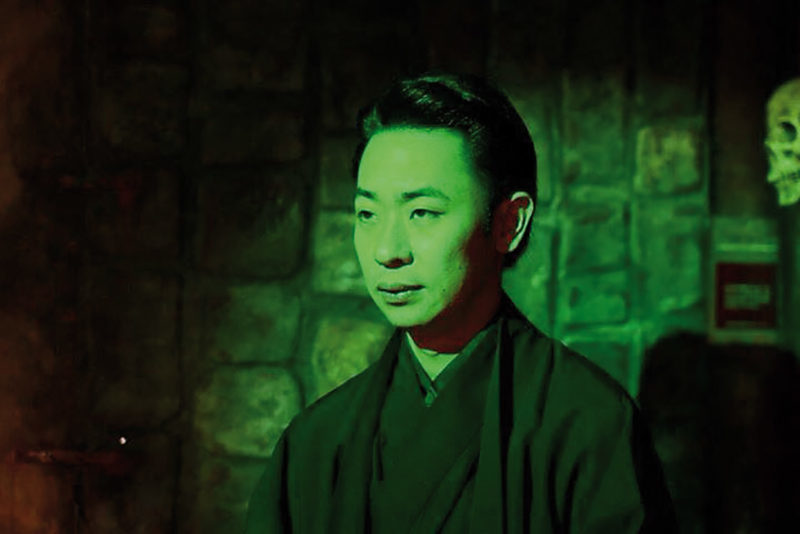 The success of the evening is down to the inspired storytelling of Shirotani ayumu.

Speaking of stories, the bar has a stable of actors who take turns on stage, and today’s storyteller is the most popular of the bunch: Shirotani Ayumu. He comes to meet the customers before the show clad in a white kimono, greeting them one by one and asking what kind of stories they like. You can even have a photo taken with him – for a 500-yen fee.

When story time comes, Shirotani take the stage and all the lights are dimmed to enhance the atmosphere. According to him, there are two kinds of scary stories: kaidan and horror stories. The latter genre is comprised of tales about people who become the target of some evil spirit without having done anything bad. In the case of kaidan, on the other hand, there’s always a reason – a back story to the terrifying events in the tale. Besides sending chills down people’s spine, these stories are often very sad as we learn that the ghosts who haunt the living were themselves the victims of some abuse in the first place.

Arguably the most famous kaidan of all time is Yotsuya Kaidan (Ghost Story of Yotsuya) also known as the story of Oiwa. This is a tale of betrayal, murder and ghostly revenge. First staged in 1825 and mixing fact (two real-life murders) and fiction, it was an instant success among audiences who were lusting for blood-drenched violent theatre. Oiwa, the tragedy’s ill-fated heroine, is poisoned by her husband (who plans to get rid of her before marrying a rich woman), but comes back from the grave to haunt him, causing him to go insane and kill all the members of his lover’s family. Shirotani is a kaidan specialist. He only has to subtly change the tone of his voice or suddenly lower it to a whisper to make your hair stand on end. As if this wasn’t enough, he produces a mischievous grin, and suddenly the ceiling opens up and a woman’s head appears, hanging from her neck.

It certainly makes for a chillingly entertaining night out.